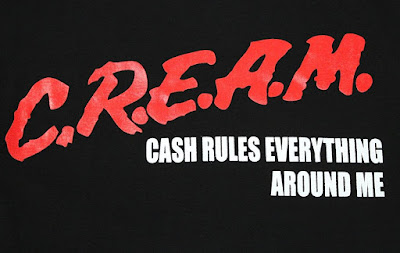 Following the success that I've had writing about both mansplaining and living with depression for River Valley Woman, I put together something about money for the 'finance' issue of the publication, which is both out now, and available to read in full on their website.

Talking about money with your partner or spouse may not be fun, but writing about it and making self-deprecating jokes about how bad you are with it was actually surprisingly easy; just keeping it (close) to the word count for the magazine was tough. There were a lot of Wu Tang Clan references I wanted to make with this one, but never bothered writing them in, mostly due to length, but also keeping in mind the audience (for once.)

Thanks again to Eileen and River Valley Woman for this opportunity.

"God damn money. It always ends up making you blue as hell.”
- The Catcher in The Rye

When my wife Wendy and I were in the planning stages of our wedding, one of the things the pastor who was officiating wanted us to do was for us to read this book about budgeting as a couple.

This was almost nine years ago, and I have no idea what happened to that book. It’s probably somewhere in our basement, in a box we never quite unpacked once we bought our house. See, here’s the thing—trying to have healthy, non-confrontational discussions about money and budgeting as a couple seems like a neat idea, but those things are very difficult to actually implement.

At the time of our wedding a lot of our money was, you know, tied up with wedding expenses. I had also started a new job that was partially commission based, and was not making very much just yet. And within three months of our wedding, we purchased a house that didn’t need a lot of work, but it wasn’t, like, totally ready to be comfortably lived in.

Conversations with your spouse regarding your finances aren’t exactly fun, unless you are filthy rich and swim in a vault of gold coins like Scrooge McDuck—then I’m sure those conversations are relatively painless.

However, you are probably a person, and not an anthropomorphized cartoon duck, so those conversations probably involve phrases like, “May was sure an expensive month,” or “A lot of our money goes toward groceries, huh,” or, “Hey, could you maybe not spend so much on records?,” or, “Have you ever thought about checking books out from the library rather than buying them?”, or, “Don’t you have enough t-shirts already?”

Those last three phrases are directed at me—self-described, I am not super great with money. I’m not, like, ‘creditors calling the house’ bad, or filing for bankruptcy bad, but I also lack the foresight to, like, save for the future since I am too busy purchasing expensive vinyl reissue boxed sets or ordering t-shirts for bands I like or animal welfare organizations.

There are moments when I am more self-aware with my spending habits, and when I think I want something, I am able to talk myself out of buying it by telling myself that this shirt or this record isn’t going to change anything for me—it’s not going to make me happier or a better person—however, stopping yourself from ordering something that’s like $20 or $30 is really not something to pat yourself on the back over.

Recently, my wife met with a financial planner to see if both she and I were on a track, not even the ‘right track,’ for the future. In order to get an overall picture, he asked us to fill out an elaborate and sobering spreadsheet that tracked income and spending, along with asking about what our current retirement savings looked like, and what kind of life insurance we respectively had. Going over all of this had me thinking about that line from Death of A Salesman, when Willy Loman fears that he’s worth more dead than alive.

As it turns out, I am not worth very much, alive OR dead—so where does that leave me?

Up until recently, when my in-laws both retired, I hadn’t given much thought to retirement and the concept of saving it. I either didn’t want to spend the time thinking that far ahead into the future, or I figured I would just continue working until I dropped dead at whatever age that happened to be.

Wendy felt similarly. “I feel like so many working adults—and maybe it’s the past generation—worked really hard for this magical pay off that is your ‘golden years,’ and I really don’t think that’s going to happen,” she told me. But she didn’t want to be unprepared in case it does, which is why she met with a financial advisor to put actual numbers to things.

During our time together as both domestic partners and as a married couple, we’ve learned that I am afraid of talking about money, and that Wendy is afraid of not having any money—these facts have to do with our respective upbringings. One thing she learned long before I did was to know where your partner is coming from when it comes to finances.

Despite my best efforts, we’ve managed to strike some kind of balance between her wanting to “save forever and never buy anything” and my “treat yo’ self” mentality—though that doesn’t mean every brand new book I toss into my ‘to read’ pile or every new t-shirt I introduce into my closet isn’t the source of minor anxiety on her part.

“Sometimes your spending drives me nuts,” Wendy said. “I get where it’s coming from, but that doesn’t solve the problem 100% of the time.”

What are the two things couples commonly argue about? Sex and money—and my wife and I fight about both! But with money—saving and spending—depending on the situation, you have to ask yourselves if the argument is even worth it. Why bother getting into it if all you are going to do is create undue tension?

The topic of money may always make you blue as hell—no matter who you are, or how much you have. There’s a chance that you’re probably always going to want more. And no matter how many records or t-shirts you own, you’ll think your collection is never complete. Having a moderately healthy discussion with your partner or spouse about money, with minor disdain and only a few tears, presents the opportunity to, in earnest, stop comparing yourselves to others and what they may have, while trying to find the right balance between saving forever and never buying anything, and treating yo’ self.