Love Me, Love My Crippling Depression 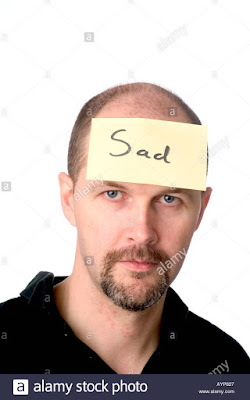 You may remember that, earlier in the year, a piece I wrote for the SouthernMinnesota Scene magazine caught the attention of Eileen Madsen, the editor of River Valley Woman, a publication printed in Mankato. She asked me to contribute something to their annual 'men' issue, which I did, and I also expressed interest in contributing again in the future.

Much like Scene, each issue of RVW is anchored by different themes. One of the themes of the October issue was 'mental health,' and I had mentioned to Eileen that I was interested in submitting something to her. "What are the deets of your mental health column," she asked me. "Not being a mental health expert yourself, unless you have some kind of hidden talent."

I was given an 800 word limit, which she was kind enough to extend to a little over 1,000; but I could go on for days and days, and go into graphic detail about my debilitating depression and anxiety. I often joke online when I share links to my pieces (specifically long-winded ones written for other sites) that it's the 'most important thing I've written.' This is not one of those things. It's an exercise in brevity, but it's also a place to start. The culture keeps saying we need to have that 'talk' about mental health in this country. Maybe if people were more upfront about how fucking awful they feel all the time, maybe people could get the help they need. 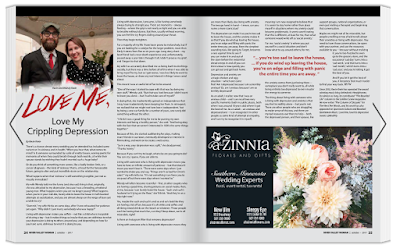 Love Me, Love My Crippling Depression

There’s a chance almost every wedding you’ve attended has included some variant on ‘in sickness and in health.’ When you hear that, what comes to mind? Is it someone surrounded by a pile of snotty tissues, waxing poetic for memories of when they could breath through both nostrils, all while their spouse stands by wishing they hadn’t married such a huge baby?

Or do you think of something more severe, like a badly broken limb, or a cancer diagnosis—the kind of ‘sickness’ that is, at least for the foreseeable future, going to alter, and put incredible strain on the relationship.

What happens when that ‘sickness’ is still something tangible, just not as visually immediate?

My wife Wendy told me the funny (and also sad) thing is that, originally, she was attracted to my depression, because I was a brooding, emotional young man. What happens when you are no longer young? What happens when you’re in your mid-30s, barely able to leave the house in half-hearted attempts at socialization, and you are almost always on the verge of tears yet unable to cry?

“Dammit,” my wife thinks on some days, after I have exhausted her patience yet again. “Why didn’t I just marry somebody who was happy?”

Living with depression, I presume, is like having somebody always trying to strangle you. There are moments—always fleeting—where the grip is not nearly as tight and you are able to breathe without duress. But then, usually without warning, you can feel the icy fingers sliding around your throat.

Then they begin to tighten.

For a majority of my life I have been prone to melancholy, but if you are looking for a catalyst for the larger problem, more than likely it stems from five or six years ago. Long story short—my best friend had a near death experience and unfortunately, passed away a year later; through it all, I didn’t process my grief, and I began to shut down.

My wife has accurately described me as being loath to do things socially, but there was a time before all of this when I was able to bring myself to try; but as I got worse, I was less likely to want to leave the house, or show any real interest in things I once cared about.

This meant I was an awful lot of fun to be around.

“One of the ways I started to cope with that was by doing my own stuff,” Wendy said. “But that was hard because I didn’t want to leave you alone—but I had to take care of myself.”

In doing that, she inadvertently gained an independence that I may have inadvertently been keeping her from. In retrospect, we realized that we might not have been ‘codependent,’ but by being a one-car family for a number of years, one rarely did something without the other.

“I think it was a good thing for me to be pursing my own interests and being a healthy person,” she said. “And being okay with the fact that we weren’t interested in 100% the same things together.”

Because of this, she started auditioning for plays, making more friends in our town, eventually developed an interest in filmmaking, and went on to create a web series.

“So in a way, your depression was a gift,” she deadpanned. “Thanks honey.”

Because if you can’t try to laugh, what else are you going to do? You can cry, I guess, if you are able to.

Living with someone who is living with depression means you have to have an infinite amount of patience—but that doesn’t mean you won’t lose it. “There were some days when I just wanted to shake you and say, ‘Things aren’t so bad for Christ’s sake!,’” my wife tells me. “It’s not something I can force you to snap out of but there were days where I wanted to.”

Wendy will often become resentful—first, at other couples who are having a good time, sharing pictures on social media; then, at me, because I can barely leave the house. “Such and such’s husband isn’t lying on the floor,” she’ll think. “And they’re on a trip right now.”

Yes maybe the such and such’s and so and so’s look like they are having a lot of fun, because it’s all smiles and selfies and drinking mixed drinks on the beach or whatever. Those people can’t be having that much fun, can they? Deep down, we’re all miserable, right?

Living with someone who is living with depression means they are more than likely also living with anxiety. The two go hand in hand—I mean, can you name a more iconic duo?

The depression can make it so you’re too sad to leave the house, and the anxiety makes it so that if you do wind up leaving the house, you’re on edge and filling with panic the entire time you are away. Even the simplest sounding task, like going to Target becomes a race against time to see if you can make it in and out of the store before the existential dread creeps in and all you can think about is how quickly you can get out and get back home.

As an adult, I realize now that I was an anxious child—and I can recall two very specific moments (both in public places, both when I was around 10 years old) where it got the best of me. As an adult—an anxious and depressed one—I can recognize it in other people as some kind of attempt at empathy, and I can try to recognize it in myself, meaning I am now resigned to believe that it is easier to stay home rather than place myself in situations where my anxiety could become problematic. It seems worth noting that this is different, at least for me, than what someone would write off as ‘social anxiety.’

For me, ‘social anxiety’ is where you put yourself in a social situation and don’t know what to say around others; for me, the anxiety comes from just being there—someplace you don’t really want to, all while being entirely too depressed to even muster the energy to converse.

The thing about living with someone who is living with depression and anxiety is that you feel incredibly alone—but you’re not. There are other people who are struggling to make sense of this too, and there are myriad resources out there to help—both the depressed person, and their spouse, like support groups, national organizations, or even just visiting a therapist and beginning that conversation.

Maybe we might not all be miserable, but people unwilling or too afraid to talk about their anxieties or living with depression. You need to have those conversations, be open with your partner, and use the resources available to you—because without realizing it, you’re too frazzled to even go to the grocery store, and the occasional ‘sad day’ turns into a ‘sad week,’ and that turns into a ‘sad month,’ which turns into a ‘sad year,’ and you’re letting it get the best of you.

And if you let it get the best of you, it becomes that much harder to find your way back.
Labels: anxiety depression mental health personal essays poorly written thinkpiece river valley woman sadness