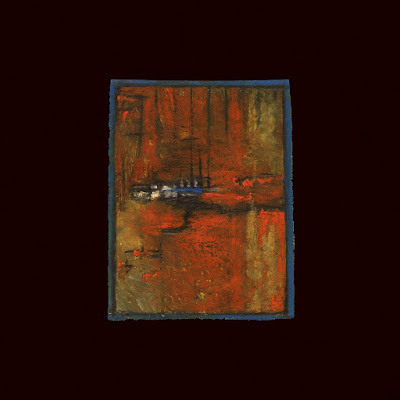 Travels in Constants represents a time, and a place (both literally and figuratively) in the short, yet prolific, career of Jason Molina.

Recorded in 2001, in between the haunting, sparse, and experimental Ghost Tropic, and the now iconic, stripped down, and mournful Didn’t it Rain, the song itself, “Travels in Constants,” was recorded for and released as part of an EP series of the same name from the Temporary Residence label. Originally limited to an edition of 1,000 CDs, the song has become an idiosyncratic rarity in Molina’s already vast canon of work.

It, along side another rare Songs: Ohia track, “Howler,” have been reissued digitally as well as a limited edition LP; and, as we near the fifth anniversary of Molina’s death, these stark, tentative pieces give listeners a small glimpse into an important period of time in Molina’s artistry, and musically speaking, they give a hint of things to come in future albums.

Molina could write and perform long songs—I mean, “Farewell Transmission” is over seven minutes. However, these are way beyond that. “Travels in Constants” is a sprawling, seemingly directionless at times tome, almost 18 minutes in length, recorded live into a four-track in Molina’s Chicago living room—the length, and unraveling nature of “Travels” serving as a small indicator of the kind of songs he would begin to write three years later on one of two records he’d release under his own name.

It takes a little while for Molina’s voice to come in, following a build up of very ominous guitar strumming—and while there’s strength in a majority of the string plucks, Molina’s voice itself has always been a very fragile sounding thing. There is also the fragility of this song, as a whole. Even though Temporary Residence has remastered “Travels,” there’s really only so much you can do with something that was directly recorded onto a four-track—the song, as it unfolds, is full of imperfections. The tape hiss serves as a backdrop that floats just below everything else, and you can hear the occasional tape quiver and warble—just one more element that makes this an incredibly human piece.

Molina, as a lyricist, was always incredibly cryptic and poetic. His lyrics were at times ambiguous, in some cases were like trying to recall a dream you were on the verge of remembering, and were almost always structured as near poetic fragments. He did have recurring themes throughout his career though—the idea of ‘trying’ appeared a lot, especially in latter day songs; and stark imagery of birds, blood, the night, and the moon are referenced countless times.

There’s a small anecdote in the book Riding With The Ghost where Molina himself pokes fun at his lyrical content, making some kind of aside like, “The songs are probably about birds and the moon”—both subjects make appearances in “Travels in Constants.” Coming up with lyrics that can be stretched to fit across an 18 minute song probably isn’t an easy task; and there are parts of the song that are wordless. However, when there are lyrics, Molina’s fragile bellow delivers. Some of the words aren’t quite there yet, or at least are incredibly perplexing—e.g, “The moon and the black moon beside the moon,” he croons. “The owl and the black owl beside the owl.” But elsewhere, the theatricality here, that isn’t always present in his songs, works—“Your pulse beats on forever in this wreckage of a man.”

‘Whimsical’ is not a word I’d ever use to describe Molina’s output; rollicking at times, freewheeling at times, but it was never of a fun, or light hearted nature, despite the oddball sense of humor he is reported to have had through most of his life.

He incorporated dusty, ramshackle sounding drum machines on his 2007 album Let Me Go, Let Me Go, Let Me Go, but didn’t really appear anywhere else. In the case of “Howler,” the curious b-side to this reissue of Travels in Constants, the drum machine is what the song is based around. Positioned in the distance so that it sounds just far enough away, “Howler” unfolds for 13 minutes around a marginally chintzy sounding keyboard progression, looped along with some light, clattering drum machine percussion to back it. Molina then brings in a reverb and tremolo heavy electric guitar over the top of that, carefully plucked as he tries to keep it together within the rhythm that’s been established.

The lyrics arrive after the three minute mark, and it’s when Molina hits what we could call a chorus for the song—him just repeating the word “Howler” a couple of times—he starts to pluck a jittery, slap-back kind of string progression that starts to get away from him a little bit. The song itself is the weaker of the two featured here—it’s more of a sketch, or a demo, than anything else—the guitar work and the disjointed, eerie lyrics would work together if the keyboard blasts and drum machine beats were removed, as well as if things were tightened up and shorter.

Molina’s music was, at its core, always about the human condition. It was about trying, and about failing—among other things, like the moon and bird and whatever. Despite the unevenness of both “Travels in Constants” and “Howler,” they are still incredibly human pieces of work, mostly intended for the most devoted of Molina fans—showing that as a songwriter and performer, he continued to try, and not everything was perfect every time, nor did it need to be.

Travels in Constants is out now as a digital download. The second vinyl pressing will be available in May.