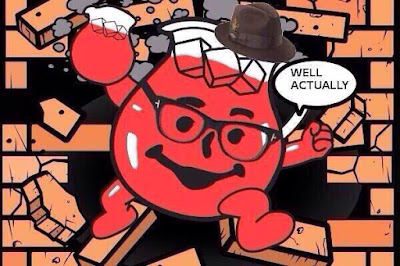 For my February 'Bearded Life' column in the Southern Minnesota Scene magazine, I wrote about sex; specifically how difficult having sex is, how it never goes as well as you'd like it to, and how it is a topic that both parties involved are too embarrassed to talk about.

The column stuck out as an anomaly in the February issue. Traditionally, the 'Romance' or 'Valentines' issue, the theme was changed to 'Radio' after I already started writing the piece, and well after it already had its charming title: 'Conjuring The Sex Demon.' I explained this to my editor, and he told me to continue with what I was working on.

I expected some push back after it was published. I have infamously received fan mail throughout the years from people who take issue with my usage of coarse language, a story I told about my sister-in-law buying a weed cookie in Colorado, and my overall curmudgeonly world view. However, in writing about the struggle of having sex, it turns out the only negative feedback I received was internally. Someone high up in the company that publishes Scene apparently just didn't care for it.

He is also incredibly conservative, and I don't think he ever really quite knew what to make of me, my sense of humor, and the the things I write.

Shortly after the piece went live online, and was available in print, I received a Linked In (of all places) notification from Eileen Madsen, the publisher and editor of River Valley Woman. She really liked my piece, and wanted to see if I would be interested in contributing to the magazine's annual "man issue," arriving in June.

I agreed to it right away, and spent three months fretting about what I should cover. "Mansplaining" was the first thing that came to mind, and I went with it.

River Valley Woman's website houses an interactive 'flipping book' version of each issue, so you can read the published version of the column online; however, Madsen was generous enough to grant me permission to publish the original/unedited piece here as a blog post.

“Where does the mansplainer get his water from?”

“I don’t know,” I respond. “Where does the mansplainer get his w­—“

These are fragile times. No longer a pot that content just to simmer, everything that is terrible in the world has bubbled up and over; scalding hot water is running all over the stovetop and no one is doing anything about it.

The day after the presidential inauguration, women across the country marched in protest because they believe (rightly so) that their rights (reproductive or otherwise) are going to be stripped away. We haven’t quite reached a Handmaid’s Tale level of dystopia yet, but there are some days when it seems like we are so damn near close to the tipping point.

No one wants to be wrong. And it seems, at least to me, like men struggle with this problem more. Men want to have the last laugh, the final word, and more than anything else—they need to be right.

I am not sure when the term “mansplaining” entered popular lexicon. The internet (a place of factual information) links it to shortly after Rebecca Solnit’s essay “Men Explain Things to Me” was published. However recent the term may be, the concept has always been there—someone finally thought to give it a name.

Despite how liberal or forward thinking of a fellow you may consider yourself to be (You listen to NPR! You voted for Hillary!), you too may, unfortunately, be guilty of mansplaining.

I know I am guilty of it. And I am ashamed.

My wife Wendy is nearing the end of a film project she’s been writing, directing, and starring in with three of her friends. They all play fictionalized versions of themselves, and the project (a series of six shorts) at its core, explores where women fit in—within friendships, the workplace, society, et. al.

Occasionally she will ask for my input, or will want me to read over something and give feedback. More than once, I have suggested that she write an entire script based around all four characters being worried their periods are going to sync.
“You realize that jokes about periods aren’t funny,” she informed me.

After the second or third time I suggested it, I realized that I shouldn’t be mansplaining comedy to my wife, especially with something so juvenile. I’m not even sure I think that jokes about menstrual cycles are funny.

I worry about mansplaining in the workplace.

When I see a female co-worker possibly struggling through a task, I have to carefully process my urge to “step in and assist.” Is it really going to be helpful, or will it just come off as me being like, “STEP ASIDE. A MAN IS HERE TO TELL YOU WHAT YOU ARE DOING WRONG.”

When I have worried about mansplaining, I’ve quickly backpeddled by saying, “Hey, I don’t mean to mainsplain this to you,” to which I have been met with confused, blank stares.

Those nonplused reactions came from women who are much younger than I am. So maybe, as my wife pointed out, mansplaining is something you only realize is happening once you mature in the workforce.

When you are first starting out in a particular job, and men are explaining things to you, you’re new enough at what you are doing, or young enough, to think, “Oh, maybe I need to be told these things by a man.” It’s only with time, and experience, that you grow and develop the confidence enough to realize that’s not the case.

She also said mansplaining doesn’t always come from a place of misogyny (surprisingly); instead, it comes from a place of confidence that is instilled more in boys, rather than girls, at an early age.

Mansplaining as an idea is a tenuous issue. Some feel it is counterproductive toward feminism; some consider it sexist and patronizing of men (cry me a god damn river) leading one to believe a true mansplainer is the type that can dish it out, but cannot take it.

I get that the idea of a man, writing about mansplaining, in a magazine that is geared toward women, is more than a little self-aware. By no means am I saying, “Hey everyone, I fixed sexism by writing an 800-word thinkpiece.”

Then what am I saying?

There are no easy answers, and in some cases, there is no resolution. I’m saying that in a society where decisions about women’s rights are made at tables full of stodgy white men, we need to keep in mind that we are all in this mess together. I’m saying that if you’ve started a sentence with, “Well, actually,” you may be part of the problem and that in a world that seems like it is on the verge of tearing itself apart, respecting one another is an easy place to start with the attempt to keep it together.
Labels: mansplaining observational humor personal essays poorly written thinkpiece river valley woman southern minnesota scene