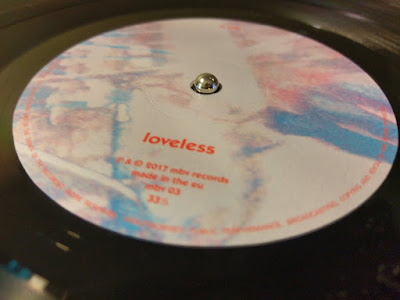 If there’s any album that it is perpetually at risk of collapsing under the weight of its own sprawling mythology, it’s Loveless. What is it about his album that makes it so important—is it the music itself, the legacy it left in its wake, or the tumultuous story behind its creation?

Loveless is, more or less, a Kevin Shields solo album. He had a very, very specific sound he wanted to create—primarily based around abrasive and experimental guitar textures. Shields played nearly all the instruments, despite My Bloody Valentine being a four-piece. Drummer Colm Ó Cíosóig played live percussion on only one of the album’s 11 songs; the rest of the album, when there is percussion on a song, makes use of samples created out of Cíosóig’s drumming. And despite Bilinda Butcher and Debbie Googe receiving credits for guitar and vocals, and bass, respectively, in the album’s liner notes, they had little, if anything, to do with how the album came together.

Alan Moulder, one of the album’s many engineers during the two year recording period, said that it was not a collaborative situation at all, and that despite Shields being very clear, in his mind, on what he wanted Loveless to sound like, he was simply unable to articulate that to the other members of the band.

The first time I heard Loveless, I thought it was like nothing I had ever heard before, and every time I’ve listened to it since then, I still have that feeling. The album itself is now pushing 30, and sonically speaking, it is still one of the most innovative and daring pieces of contemporary popular music. It’s launched a thousand imitators, but Loveless itself will always been completely original—a fascinating, cathartic 48 minute descent into a place where a deafening, ugly cacophony is pressed directly up against a haunting, dreamy, woozy, and somber beauty; a place where all of this eventually collides and blurs together, creating something that is still, to this day, not of this world.

In the aftermath of Loveless, My Bloody Valentine became a band that worked at their own pace—a glacial pace. They didn’t really owe anybody anything. They made an album that they, or at least Shields, thought was that good, so why would you want to try and do it one better? Following critical acclaim but sluggish sales and a live show that, at the time, was considered one of the loudest possible—then came the years of inactivity and alleged writer’s block on the part of Shields. The band began to fall apart in the mid-1990s, and officially broke up in 1997, with Shields possibly losing his mind and becoming reclusive throughout the rest of the 90s, with hours and hours of recorded and scrapped material shelved indefinitely.

The band eventually reunited a decade after the initial split, and at that glacial pace, it took another five years for them to issue their third album, m b v—a nine song collection, featuring material that had been recorded before the band’s split in the 1990s.

During their years of inactivity, Loveless became something much larger than itself. In 2012, 21 years after its release, Shields finally released the long gestating compact disc remasters of Isn’t Anything (the band’s debut full length), the extended plays from 1988 to 1991, and Loveless—packaged as a two disc set with one version of the record being labeled as ‘remastered from original tape,’ and the other as simply ‘mastered from the original ½” analogue tapes’—a kind of neat puzzle for analog audiophiles to figure out the subtle differences between both editions.

Originally issued on vinyl at the time of its release by Creation Records, Loveless was distributed (on cassette and compact disc only) in the United States through Sire—a Warner Brothers subsidiary. The Discogs page for Loveless lists the first U.S. vinyl pressing from 2003—issued by the polarizing Plain Recordings imprint.

I almost bought this edition once, nearly a decade ago. I found it at a record store in Minneapolis, and my wife had taken me record shopping for my birthday. I held it in my hand for a moment or two, gazed into the familiar red and pink hues of the front cover, and then placed it back in the stacks and moved on. I’m glad I did—in an interview, Shields claimed this repressing was unsanctioned by the band, and it was mastered from CD, not the original tapes.

Within recent years, what amounts to a bootleg or white label pressing of Loveless has started to turn up—being sold in record stores to unsuspecting ‘peak vinyl’ shoppers, who more than likely, don’t know any better about what they are getting. Interestingly enough, these editions of the record, pressed onto colored vinyl, are all banned from the Discogs marketplace.

Arriving 27 years after the album’s original release, Shields has finally just completed an official vinyl reissue and remaster of Loveless—painstakingly put together over years and years from an all new analog master of the record. 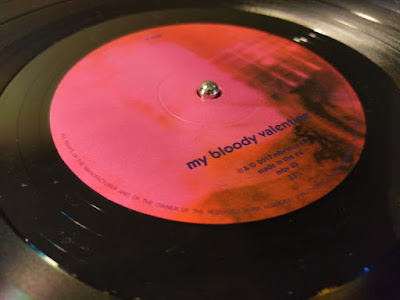 Pitchfork, bless their hearts, conducted a pretty substantial interview with Shields following the announcement that this reissue (along with a reissue of the band’s 1988 album Isn’t Anything) was on the way; it’s worth a read, since it goes into the technical aspects of how labor intensive, as well as costly, it was for Shields to make this happen the way he wanted it to.

Needless to say, if there wasn’t already a lot of pressure on placing the needle to a new copy of Loveless on vinyl, with all that history and mythology weighing on it—there certainly is now, knowing what a burden of time, money, and energy went into this album, yet again.

The truth is that the new vinyl edition of Loveless certainly doesn’t disappoint, but also, strangely enough, it doesn’t impress either. I guess maybe I was guilty of putting entirely too much pressure on this reissue to blow me away the second the opening snare hits and squalling wall of noise started on “Only Shallow.” Maybe I’ve been spoiled by other painstaking reissues, like the depth added to the Purple Rain remaster, or to the 20th anniversary edition of OK Computer.

As cliché as it sounds, in those cases, you are literally hearing it again for the first time—with Loveless, there is a sense of that in some places, however, it is not as overwhelming of a sensation.

Loveless is always on just on the cusp of becoming a brick wall of sound—but in every incarnation it’s had—the original 1991 release, the 2012 CD reissue, and now this vinyl repressing—it manages, just barely, to transcend that. It seems like it simply should be a brick wall of sound—but within all that noise, there are layers; there is depth; there is warmth. You find it all, and when you focus hard enough, you find that it eventually overtakes you completely, so that by the time the poppy, up-tempo rhythm of “Soon” comes to an end, it’s like a jolt to the system you were not expecting.

During the recording of the White Pony record, Deftones vocalist Chino Moreno famously told their producer Terry Date, that they wanted their record to sound like Loveless. Date called it the ‘most coked out mix’ he had ever heard in his life, and both this vinyl reissue, as well as the 2012 CD editions, improve on the original 1991 release. Though, it is tough to explain just how they improve on it. Sometimes with a remaster and reissue you’re just like, ‘Yup, they made it louder,’ but here, yes, that is the case, but there is more to it than that. 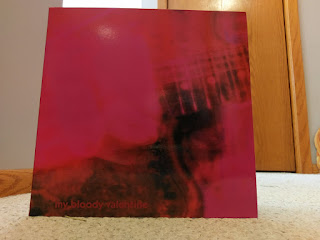 Pressed onto 180 gram vinyl (but of course) and housed in a very heavy duty cardboard gatefold package with a special anti-static sleeve, Loveless isn’t here to fuck around. From a sheer quality standpoint, the actual vinyl record itself is nearly immaculate—there’s little, if any, surface noise, and that’s on my shitty $100 turntable. I can’t even begin to imagine what may be unlocked on this thing if I were to play it on a nicer, higher end stereo. Even when you think things my start to sound a little crispy or crackly sounding, or even when you think it’s going to overpower itself, it doesn’t—it’s able to rise above all of that, and you find those layers and depth once again.

And on this reissue, yes, there is a sense of warmth from within the vinyl that is missing from the pristine edges of a compact disc edition.

Loveless is a tough album to describe but I suppose one way you can look at it, from beginning to end, as a journey. It opens with an iconic torrential snarl, and it closes with a long fade out of an up-tempo beat; in between there are moments of great abrasion, moments that swoon, moments of slow motion majesty, moments that despite the muddled and mysterious lyrics, can evoke great emotion, and the biggest surprise of all, there are moments that fall into a traditional pop song—verse, chorus, verse—structure. Even in all that dissonance and noise and feedback and buried vocals, Shields still understands pop music, and there are actual moments of catchy songwriting.

Painstakingly sequenced by Shields, the album is split at its most logical point to create the A and B sides—and please pay special attention to the subtle segues in between songs. There is never really a bad time to revisit this album, whether it’s the millionth time you’ve heard it, or if this is your first, you may as well listen to it in what is probably its most definitive version. It’s an album that, after all this time, still startles, impresses, and captures my imagination every time I hear it.

Loveless is available now, along side Isn't Anything, from the band themselves.