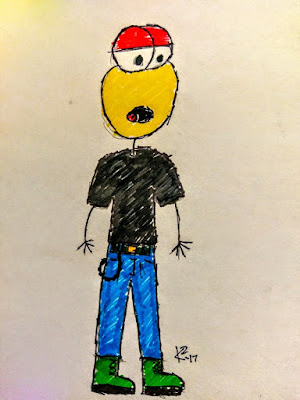 The April issue of the Southern Minnesota Scene magazine hit newsstands a few weeks ago, and that means content is slowly making its way online. My column for the month went live on March 31st. April's issue is the 'art' issue, which, as I mention within the column itself, is always a challenge for me.

But this time around it was relatively easy because I talked about my own history with visual arts, and I interviewed a real live artist, my friend Andi Gaffke.

Also, that drawing up there? Well, that's Buggy, a stick figure character I created in 1995. He's referenced within the column, however, there was some kind of oversight in getting that image into the print edition of the piece.