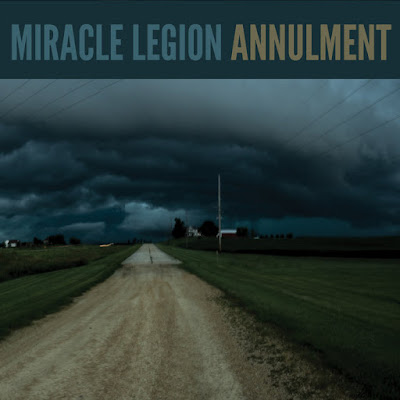 I get the impression that Mark Mulcahy doesn’t like the Twin Cities.

It seems like he should. In the late 80s, he and Miracle Legion guitarist Ray Neal recorded what is arguably the band’s finest album, Me and Mr. Ray, at Prince’s Paisley Park studios. So you’d think that dude would want to come back through this way and play a show or two.

Mulcahy came out of musical seclusion with his 2013 solo effort; the following year, he reformed his fictional band Polaris for their first ever tour. Last year, much to everyone’s surprise, the beloved but always underappreciated Miracle Legion reunited for a string of live dates in support of the reissue of their final album.

Miracle Legion are out on the final leg (and last, ever) of their reunion tour, and in conjunction with those shows, as well as with Mulcahy’s own new solo effort due out later this month, the band has released a massive live album. A sprawling 25 tracks, Annulment plays like a greatest hits collection for the band, pulling material from their debut EP, as well as their four studio albums. Recorded mostly in Maquoketa, Iowa (with a few additional recorded in Brooklyn), the double album captures the raw and at times visceral urgency with which these songs were originally committed to tape over 30 years ago.

Opening with the slow burning build of “Country Boy,” Mulcahy and company dip back and forth between deep cuts in the band’s canon and what could be considered “fan favorites,” or at least the band’s most accessible material: so yes, “Mr. Mingo,” “Even Better,” “The Backyard,” and “All For The Best” are all included in the set, as well as Portrait of A Damaged Family’s peppy “Madison Park.”

Always in the shadow of the similarly sounding, jangly college rock of R.E.M., Miracle Legion’s ramshackle, unpolished, and partially unhinged aesthetic was part of their charm and what made separated them from other bands of this period. In a live setting, reuniting after 20 years of dormancy, they aren’t looking for perfection on stage, so listeners shouldn’t be expecting that from Annulment. Miracle Legion, circa 2016, aren’t terrible live, but there is a very loose and free wheeling atmosphere in these songs—specifically in the material recorded in Iowa. Sometimes it sounds like the song is on the verge of falling part. Occasionally it seems like it does, when the pacing and rhythm feels like it gets a little off in “Even Better” or in “Ladies From Town.”

Perhaps it has something to do with the setting: the band performed at the Codfish Hollow barn, which appears to be a very relaxed venue. There is a noticeable difference in tightness in the band when you compare this material with the few songs recorded in Brooklyn at The Bell House.
Maybe I should just lighten up and enjoy the sound of a band that sounds like they are having fun performing old songs.

It becomes more apparent on Annulment than on any of their studio albums just how dark some of Miracle Legion’s songs are—and, wisely so, the band contrasts those darker sounding tracks (“Storyteller” comes to mind right away as does the devastating “You’re The One Lee” presented here in a stripped down arrangement) with lighter and slightly more whimsical moments, like “I Wish I Was Danny Kaye.”

In his earlier days as a songwriter, Mulcahy hadn’t quite tapped into the bittersweet nostalgia that he was able to capture in the songs he wrote for Polaris’ single album, the soundtrack to “The Adventures of Pete and Pete,” though you can hear glimmers of it in “And Then” and “Say Hello.”

Structurally, it is a tad bit puzzling that what is perceived to be a full concert from the band (including an encore) concludes, then four additional tracks are tacked on to the end of that—however, the Brooklyn material does include the cacophonic “Closer to The Wall” and the charm of “Snacks and Candy.”

Annulment is, at its core, a service to fans of the band—both from their original run in the 1980s and 90s, to those who found the band later on through Mulcahy’s solo work, or through Polaris. It’s probably not the kind of record that is going to win Miracle Legion a plethora of new listeners, but for those who may be discovering the band for the first time, it’s a good way to get exposed to the depth of the band’s canon.