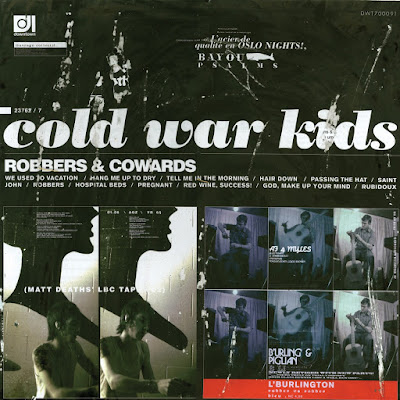 Recently, I went on a short vacation with my wife and members of her family. Prior to leaving town, I (cleverly) shared a link for the audio to the Cold War Kids song “We Used to Vacation” on Facebook with the caption “current status.”

Up until that moment, it’d had been a long time since I thought about that band, and it made me realize that their full-length debut, Robbers and Cowards, is celebrating its 10th anniversary this year.

I remember how I first heard about the Cold War Kids, but I just don’t remember where exactly. It was early 2006, and I spent a lot of time scouring the internet for free music. I feel like this was a time period that could be considered the ‘early days’ of music blogs—and at this time, when the internet was still a marginally fun place, music blogs shared a lot of free mp3s.

It must have been from either a blog called I Am Fuel, You Are Friends, run by a girl named Heather Browne, or the M83 referencing I Guess I’m Floating, operated by two dudes named Nate and Connor, who like hadn’t met yet when they started they blog, if I remember correctly.

With enough scouring, I found material from the band’s earliest EP, Mulberry Street, as well as bits and pieces of Up In Rags and With Our Wallets Full—songs off of which would go on to be re-recorded for Robbers and Cowards.

So much time has passed now that I don’t remember if the Cold War Kids were a band I had to slightly will myself to like, or if I took to them right away; and at this point, I can’t quite recall what it was that drew me to them in the first place. Maybe it was the bombast of lead singer Nathan Willett’s voice, or the ramshackle instrumentation of the band’s aesthetic.

Like any band, young and new or old and seasoned, there are some songs that are more successful than others. “We Used to Vacation,” I think, is one of the band’s most successful—a “story song” if you will about an alcoholic family man.

Of the group’s earliest material that found its way onto Robbers, I think their best song is probably “Hospital Beds,” which, upon some additional consideration, is probably the first song I heard by the Cold War Kids. Steeped in heavy-handed religious imagery (as many of their songs were at that time) it paints a vivid, evocative picture of two men with little in common sharing a hospital room. Musically, it’s also one of the band’s most bluesy sounding—powered by a jaunty piano and stomping percussion.

So what became of the Cold War Kids?

Upon immersing ourselves in Robbers and Cowards at the tail end of 2006, my wife and I dubbed ourselves fans and saw the band on their first headlining tour of the United States at the Varsity Theater. Obviously shook by their sudden, seemingly overnight success on the indie rock circuit, Willett looked out into the crowd after the first song and said, “Holy shit there’s a lot of people here tonight.”

I guess I also liked them enough to talk about them with a woman who I worked with at the time. She could never remember their name, and always called them “those Cold War Boys.”

By 2008 though, maybe my tastes had changed. The band released its sophomore LP, Loyalty to Loyalty in the fall of 2008, and I can recall hearing the first single off of it, “Something is Not Right With Me” and feeling rather nonplussed about it how abrasive it sounded to me at the time. After that, I didn’t really give the band much of a second thought.

I think at some point, many years later, my wife and I heard a more recent song of theirs on 89.3 The Current, and we were both a little surprised with how different it sounded in comparison to their early material.

Usually, with these poorly written thinkpieces and retrospectives that I write, I try to go back and revisit the album in question so I can re-familiarize myself with it. In this case, I didn’t. One, because my copy of Robbers and Cowards is long gone, sent away to some used CD clearinghouse in a gigantic purge of stuff I wasn’t listening to three years ago. Another reason is that I don’t think I need to revisit it to recall what I liked, and what I didn’t like about it—front loaded with nothing but its, the pacing slows down exponentially with dirges like “Pregnant,” and the whole thing kind of falls apart by the end.

Believe it or not, many bands from the early boom of music blogs are still around—Tapes ‘n Tapes haven’t broken up, but they also haven’t released an album in five years; Clap Your Hands Say Yeah reissued their lauded debut last year in commemoration of it’s 10th anniversary and toured behind it; and yes, the Cold War Kids are still together. Despite going through a number of line up changes in the last decade (only Willett and bassist Matt Maust are the two original members left) the band continues to record, and has hung onto its deal with V2 records. Its most recent album was released two years ago.

Everything about music is fleeting and temporary—live performances only last that one moment; cassette tapes wear out and break, vinyl and CDs get scratched, mp3s can be deleted. The same can go for bands. It’s very easy to become interested in a band at one point in your life, but it is more difficult for you, the listener, as well as the band, to remain engaging and keep you listening as you both evolve.

Unfortunately, not everything grows with you, and the Cold War Kids were an example of that. Not really a ‘flash in the pan’ per se, but it’s the kind of music I outgrew rather quickly.  In being reminded that this was a band that existed, it does however remind me of different times—times when I was younger, possibly a little less anxious than I am now, and a time when I used to vacation.
Labels: 10th anniversary 2006 cold war kids indie rock nostalgia poorly written thinkpiece retrospective robbers and cowards thinkpiece