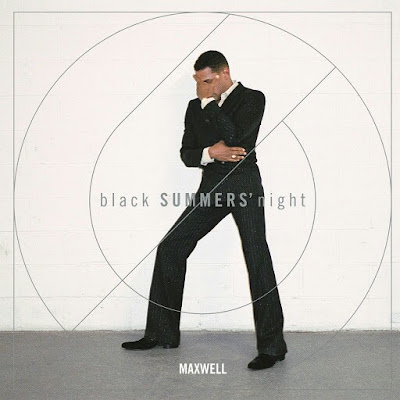 2016 is a big year for the enigmatic R&B crooner known as Maxwell. Not only is it the 20th anniversary of his disarmingly smooth and sensual debut record, Maxwell’s Urban Hang Suite, it marks a return from his seven-year, self-imposed exile.

The second part in a planned trilogy, blackSUMMERS’night arrives much later than many had anticipated. But, despite the wait, it’s an album steeped in urgency that musically transcends beyond “neo soul” and finds the singer in peak and rare form—his voice, no longer as young as it was, has aged gracefully and impressively. It’s still bold and smooth when it needs to be, and his (now smokey) falsetto still soars.

blackSUMMERS’night is a dense record, that really wastes no time getting down to business with the post-disco jam “All The Ways Love Can Feel” that opens things up, before sliding into the skittering shuffle of “The Fall,” and the electrified soul of the Prince-esq “III.”

One of the album’s strongest tracks was also its first single, “Lake By The Ocean”—a big, bombastic statement that, like many of the songs on black, features some impressive production techniques on the drum tracks, giving it an interesting edge. “Can we swim a lake by the ocean?” Maxwell asks in the song’s refrain, his voice punctuating the question powerfully as soulful synths quietly swirl in the background.

In a recent interview with The New York Times, a psychedelic pop influence is noted by the article’s writer, while Maxwell himself calls the album’s sound “progressive soul,” which is about as accurate of a descriptor as one is going to get with a record so rich and so diverse as blackSUMMERS’night—that psychedelic element is present, as songs like “Hostage” and “Lake By The Ocean” temporarily descend into a slight trance—and in the case of “1990x,” the song that opens the album’s second half, it does more than temporarily descend. The song, the album’s second single, is structured around a slow moving, twinkling groove that has a loose, otherworldly weightlessness to it right from the beginning.

Structurally, blackSUMMERS’night is slightly frontloaded with all of its most accessible material, but I stop short of saying its best material due to the quality of the complete product. From start to finish, this album is damn near perfect, and even when it falters slightly (“The Fall” isn’t exactly its strongest track, and the second half of the record slows the pacing down just a bit) there isn’t really a bad song on here, making it a rather rewarding and surprisingly fulfilling listening experience.

With eight years between his third and fourth record, and now another seven between his fourth and fifth, whether he meant to or not, Maxwell joined the ranks of his R&B/neo soul contemporaries, like Lauryn Hill (who has yet to properly follow up her debut album) and D’Angelo, when it comes to the pace at which they work. In a recent Pitchfork interview, Maxwell claimed certain songs on the record took years to complete—“Hostage” apparently taking four years just because he “didn’t have the thing in him to sing it like that.”

He also cited the anxiety of turning 40 and not being married as another reason for the delay in blackSUMMERS’night, adding that it’s a better record because of how long it took.

Seven years between records, in today’s music industry, is an incredibly long time. Not as long as, say, 22 years like My Bloody Valentine, or 14 years like D’Angelo, but long enough that, in a sense, you have to really work to reestablish yourself as a name when you finally decide to return, while attempting to balance the slight mystique you may have built for yourself while you were gone. And as far as promotional efforts, Maxwell is putting in his time and putting himself out there—on the eve of the album’s release, he had already released half of it via YouTube lyric videos.

It also seems worth noting that for 20 years, Maxwell has remained signed to the same major label, which speaks volumes of the patience they are willing to have with an artist like this who has spent over half of their career not producing anything tangible.

In comparison to its predecessor, blackSUMMERS’night is a much more raw sounding and immediate listen that can be fun, but overall, is a demanding album that wants your attention (and deservedly so), and wants to be taken seriously. Throughout its eleven tracks, Maxwell takes you through love, lust, heartbreak and the complexities and confusion found in the spaces between all three.