The Same Things at The Same Time - 'The Eraser' turns ten 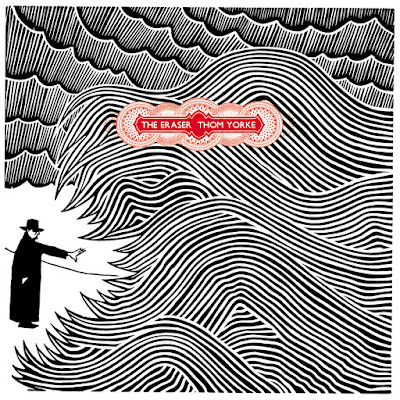 On the desktop of the computer, I keep two ‘sticky notes’ running—one of which is a list of new album releases that I am considering writing reviews for; the other, which is kind of lengthy right now, is a running list of albums that are celebrating milestone anniversaries—usually either ten, or twenty years.

Recently my wife saw my lists and let out an audible “UGH,” following it up with, “God, The Eraser really came out ten years ago? FUCK we’re old.”

Yes, it’s true. Thom Yorke’s first solo foray officially arrived into this world in July 2006, but prior to that, it leaked online at the end of May, and yes, I remember combing old Radiohead message boards looking for links to download the leaked version onto my antiquated IBM Thinkpad, running Windows ’98.

And I specifically remember one terribly clever user of one of those boards providing a link, but called it the ‘laked’ version of the album; a reference to the “One little leak becomes a lake” lyric found within. Why this minor detail has stuck with me for a decade, I do not understand.

While The Eraser is dubbed a solo effort, many of the samples it is created around stem from instrumental Radiohead tracks: the opening piano chords of the title track are chopped up bits from music Johnny Greenwood gave to Yorke, “Black Swan” is structured from a rhythm originally recorded by Ed O’Brien and Phil Selway, and “And It Rained All Night” features a completed Radiohead song, ‘The Gloaming,” just shredded to bits.

The Eraser also arrived at a weird time for Yorke and the rest of Radiohead. Following three years of inactivity, the band was touring in 2006, road testing new material that would eventually be recorded and released as In Rainbows. Yorke himself, at the time anyway, did little to promote The Eraser, save for releasing a few of the tracks as singles.

It’s also worth noting this is the only Radiohead related effort to feature an ‘Advisory Lyrics’ sticker on the front, thanks to the repeated “This is fucked up,” in “Black Swan.”

As an album, at the time, he referred to it as “one lean motherfucker,” meaning that at a sparse nine tracks, all the fat or excess had been trimmed away—something he regretted not doing on the somewhat bloated 2003 Radiohead album Hail to The Thief. And yes, there were b-sides or leftovers from The Eraser sessions, and when they were included on singles, and eventually released in their own collection called Splitting Feathers, you could tell why they had been left on the cutting room floor.

Ten years later, a bulk of The Eraser still works—the title track alone will always be one of the album’s finest tracks and probably one of Yorke’s best—with or without the rest of the band. The melancholic, reflective “Atoms For Peace” is also a standout, as well as the pensive, marginally ominous closer “Cymbal Rush,” a song that Yorke had debuted earlier in 2006, performed alongside Johnny Greenwood in a paired down arrangement.

Even at only nine tracks, The Eraser is still a pretty dense affair. There’s a lot going on in these songs, thanks in part to Yorke’s interest in electronic music. And throughout the album, it becomes more and more difficult to tell what is a live instrument, or what is a sample of an instrument. As a whole, even when it slows itself down, the overall atmosphere of the record is terribly frenetic, bordering into chaotic at times—the low, dramatic sweeping of “Analyse,” and continues through the dark “Harrowdown Hill” and into the pulsing abandon “And It Rained All Night.”

They were songs with, at the time, had a sense of urgency, especially the politically, dark “Harrowdown Hill,” and ten years later, that sense of urgency really hasn’t waned.

As a whole, for the most part, The Eraser has aged relatively well—despite its glitchy, nervy tendencies, “Skip Divided” was never the album’s strongest moment, particularly because of its groan inducing lyrics—“I’m a dog, I’m a dog, I’m your lapdog,” Yorke mumbles while the minimalistic beat twitches behind him; the same could be said for some of the lyrics on “And It Rained All Night,” but I can forgive because it’s so easy to get lost in the moment with song’s energy.

A decade later, what is the lasting result, if anything of The Eraser? It was never really meant to establish Yorke as a “solo artist” per se, but it did allow him to build a small body of work outside of his band—in order to play songs of the album live, three years after its release, he formed a “super group” with Flea from the Red Hot Chili Peppers, named Atoms For Peace; they later released an Eraser-meets Afro-beat album, Amok, at the beginning of 2013 and toured in support of it.

He released a second, even more atmospheric and dense—and exponentially less accessible—solo album, Tomorrow’s Modern Boxes, in the fall of 2014, which served as a bit of a last hurrah before he got down to business with the rest of Radiohead to begin work on what would become A Moon Shaped Pool.

It’s not an album I revisit regularly, but when I do listen to it, it is still an enjoyable an at times a fun listen; however, when I think about The Eraser, it’s more of the nostalgia for the time surrounding its release that comes along with it, and is slightly more potent than the music itself.

I was 22 going on 23, and my wife and I had just moved into our first apartment together. It was a different time, one that doesn’t seem like it should be 10 years removed, but it is—the afternoons spent playing The Eraser from the Windows Media Player, using an auxiliary cord to run it into my old stereo until the CD itself actually came out; then, the next year, purchasing it on vinyl. 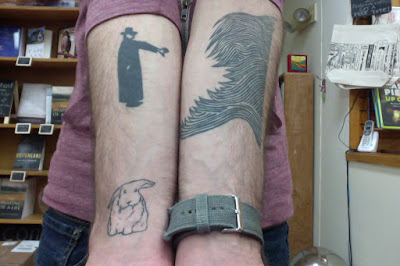 When I turned 25, I got my first tattoo—a Radiohead tattoo of the crying minotaur image that they used heavily during the Amnesiac period of time; six months later I got another Radiohead-themed tattoo, the man from the cover art of The Eraser. Placed on the inside of my right arm, it would be another four years before I got around to finishing it—getting a large section of the waves he’s holding back inked into the inside of my left.

I didn’t get them because, like, The Eraser changed my life or anything—Radiohead, as a whole, did. But I got them because I was a fan of the artwork by Stanley Donwood, and also I guess because I thought such a drastic undertaking would be impressive to have as a representation of my devotion to the band that I owe so much to.

So even long after the final notes of “Cymbal Rush” finish skittering, I’m still connected to The Eraser through the ink in my skin, and, less impressively, by the large poster we have framed, hanging in our living room—obtained from the record store that used to be in our town, which, much like revisiting the record itself on its tenth anniversary, is more about nostalgia than it is anything else.
Labels: 10th anniversary 2006 anniversary electronic nostalgia poorly written thinkpiece radiohead retrospective tenth anniversary the eraser thom yorke