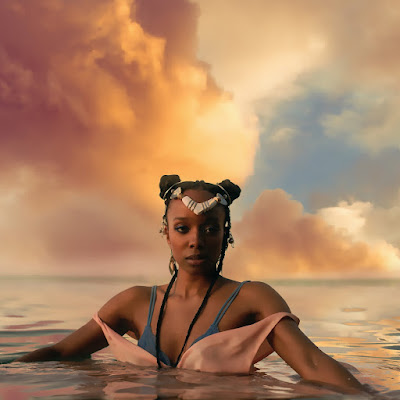 Who is Jamila Woods?

Well, aside from the woman slowly emerging from water on the cover of her debut solo album, HEAVN, she’s a combination of an R&B singer and a rapper, showcasing a post-Badu whimsy mixed with an unrivaled sense of urgency and an incredibly sharp intelligence in her lyrics—something that runs throughout the course of the album.

Aside from the pressing immediacy of moments on the album—specifically the unrelenting “Blk Girl Soldier,” there’s a sense of familiarity in many songs on HEAVN; and that’s because of Woods’ effortless ability to interpolate lyrics from the history of pop music into her own—referencing Feist on “Lonely Lonely,” The Cure on the title track, Paula Cole, and at one point, Incubus.

Some may be put off by this technique, writing it off as lazy or uninspired, but it’s quite the opposite. It shows the impact contemporary popular music has had on Woods as an artist, as well as (and more importantly) it shows her creativity in taking those influences and making them her own.

Musically, Woods also shows the impact a variety of styles and genres had on her as a performer. Each track on HEAVN comes from a different place—there’s the near alternative rock guitar sequencing and skittering percussion of “Lately”; the slinky trip-hop vibes of “Lonely Lonely”; and the jazzy, lite hip-hop of “HEAVN.”

The Pitchfork review talks at length about the timeliness of an album like this because of the current racial climate we live in. Not only is HEAVN a smart dissection of contemporary popular music; more than that, it’s a look at what it means to be black in 2016—a black woman; a black artist; black.

“The camera loves us, Oscar doesn’t,” Woods states bluntly on “Blk Girl Soldier.” On “VRY BLK,” it’s even more direct—“If I say that I can’t breathe, will I become a chalk line?”

The topic of race is a sensitive one at the moment, and it’s commendable for Woods—a poet, first and foremost—to find an intelligent and accessible way to begin a conversation on the issue by dressing it up in incredibly listenable and enjoyable pop music—and that’s what HEAVN is. It’s an imperative listen given the current situation we find ourselves in as a nation, and it handles the matter tactfully and gracefully. Woods has made an album that is both serious and thought provoking and still somehow manages to maintain a sense of humor.