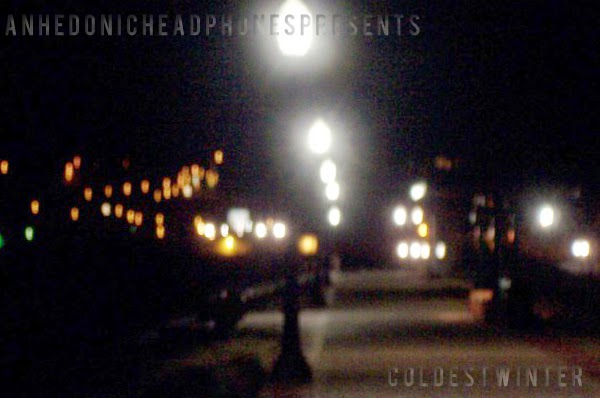 I took that photo in February of 2006 along the riverwalk in Dubuque, IA, back when I was living there. I was 22, living in a basement apartment, and working a job I hated. It was awful, but needless to say, I learned a lot about myself in the span of time that I lived on my own in that apartment, prior to leaving Iowa behind completely.

To avoid my cold apartment, I would stay out late at night after I ate dinner, haunting coffee shops and bookstores, and occasionally just aimlessly driving around the city. I used to try to take a lot of dramatic photos. This is one of those photos.

It's been a hot minute since I've dropped a mixtape for this blog and let's face it, since September, it's been a hot minute since I've updated this site on the reg. I suppose that is what happens when you write for a living for the newspaper, and are discouraged from listening to music while at work; the last thing you want to do when you come home is sit in front of another and try to write a record review of an album you probably don't even care about anyway.

I can't say that I've stopped "liking music" since I started this blog nearly two years ago, but I will say that my patience has worn thin and that because my time is so precious now, I can't even be bothered to review things I only have a passing interest in. And so as another dumb year winds to an end, the post count dwindles lower and lower.

Winter is awful and is exponentially less nostalgic than the fall. But I have winter songs, you see. Songs that make me think of various winters in my life, or very specific moments that took place during the winter. These are some of those songs. The memories associated with these are neither specifically good, nor bad. They are just fragments set to this music, forever embedded in the far reaches of my memory.

You Come and I Go by Hotel Lights
Red Comet Dust by Jason Molina
Replica by Oneohtrix Point Never
Tonight, I Will Retire by  Damien Jurado
Starlite Diner by Ryan Adams
Sparks by Coldplay
One With The Freaks by The Notwist
Kid A by Radiohead
Disintegration Loop #3 by William Basinski
No Name #5 by Elliott Smith
Fantasy by Family Band
Landslide by Smashing Pumpkins
Horses in My Dreams by PJ Harvey
Come Down to Us by Burial
The Ghost in You by Duncan Sheik