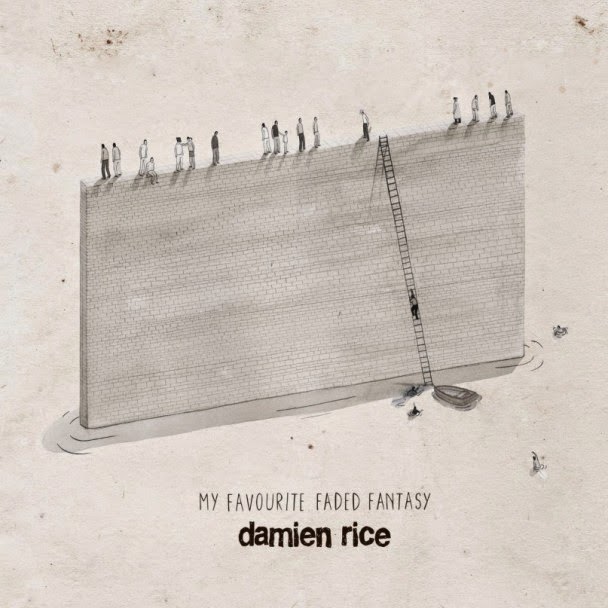 In the very modern year we are currently living in, the idea of listening to a new record from Irish troubadour Damien Rice has me feeling like a wee-bey.gif, you know?

Like, here’s the deal—I figured this dude was all done. And I even kind of touched on that when I wrote my thinkpiece last year on his debut record, O. After his disappointing and maligned follow up in 2006, aside from the occasional European festival live performance, he all but disappeared.

But now, eight years later, Rice has returned from wherever he was, with an all-new set of Rick Rubin helmed tunes, clumsily titled My Favorite Faded Fantasy. It’s worth noting that Fx3 marks Rice’s first effort since the very public falling out with former girlfriend and former collaborator Lisa Hannigan, who’s haunted, damaged vocals provided a slight reprieve to Rice’s earnest “singer/songwriter”-y delivery. There was a moment within the final third of Fx3 where I was like, “Damn, dude is just singing his motherfucking heart out,” and it was then I realized that this record is all Rice, all the time, and Hannigan’s presence was suddenly sorely missed.

Eight years in the wilderness did not dramatically reshape Rice’s sound. And even with Rubin behind the boards, this sounds like a Damen Rice album. I was hoping that this would sound like Yeezus, but unfortunately it does not. There are no “uh-huh honey” samples; no Daft Punk electro-scuzz; no “Blood on The Leaves” go for broke moment.

Instead you just get more plaintive acoustic guitar plucking, earnest vocals, big, lush, drippy string arrangements, and song lengths and structuring that border on being self-indulgent—specifically looking at the ULTRA emotional build up on “Trusty and True.” It’s like this may as well be playing during the trailer for a movie that needs serious Oscar consideration.

And I mean I’m kind of half serious, half kidding about the whole Yeezus thing. Look comparing that record to Damien Rice is like comparing apples to a fruit nobody has ever heard of before, and Rick Rubin will produce like a million other records and none of them will come close to what he worked on with Kanye West. But I had my hopes, you know, that this would be weird and moody or at least something different.

It really just sounds like Rubin showed up to hit record on the tape, and then checked out as Rice and his band played. It also sounds like this record cost a small fortune to make. That, too, was an issue with Rice’s 2006 effort, 9. Long gone were the organic, raw aesthetics that made O such an interesting listen; those were replaced by slick production values from working in proper studios.

The only really surprising moment is during the mid-section of the album’s 10-minute second track, “It Takes A Lot to Know A Man.” Rice layers his vocals, specifically placing different phrases on either the left or right channel, creating a pretty serious, claustrophobic, stark moment on the record. It’s the kind of oddball “arty” thing he would have done a decade ago, when at the peak of his O success, grew weary of the “Irish singer/songwriter” moniker he had been given, and decided to start fucking around with looping and distortion pedals during his live performances.

When you’re young and emotional, it’s easy not to see something you maybe don’t want to see—like that Rice is a horrible lyricist. It’s a fact my wife pointed out to me when 9 came out, on songs like “Grey Room,” with lyrics such as, “I’m frozen in frost.”

And then there was that whole song he wrote about his dick.

Eight years has not made Rice a better lyricist. There are some truly cringe worthy moments on Fx3, including the album’s second single, “I Don’t Want to Change You,” a song that features the refrain of: “I just came across a manger, out among the danger, somewhere in a stranger’s eye.”

Before that, on the frankly titled “The Greatest Bastard,” he sings “I helped you open out your wings, your legs, and many other things.”

It’s worth noting that at this point, it’s very easy to jump to the conclusion that many of these songs are written about his personal and professional break up with Lisa Hannigan. Maybe it would have been easier for him to send Hannigan that “Hey stranger…” text message rather than writing an entire album about how much he still cares about her.

Rice, at his core, wants to be taken seriously as an artist. That’s why he walked away from a record deal from Polygram in the mid-90s with his former band Juniper (they went on without him to become Bell X-1.) That’s why he self-released O, letting it build momentum over the course of two years before it was picked up by Warner Brothers (stateside, anyway) to be reissued—then signing to Warner for the release of 9 and Fx3. He claims he didn’t care that 9 was a commercial failure, and he claims it doesn’t matter if the same fate falls this new album. HE IS IN IT FOR THE MUSIC, MAN.

The idea of the “sensitive” male singer/songwriter has come a long way since we all heard the first guitar strings plucked on “Delicate.” I mean, in 2002, Justin Vernon wasn’t even Bon Iver yet. The real problem with this record is that I’ve grown up and Damien Rice hasn’t. In retrospect, O is not the kind of record you can take with you as you get older. It stays with you, soundtracking very specific memories of your formative years. But it doesn’t age well. And it’s best to leave it in those memories, rather than try to bring it into the present.

At 21 or 22, I was an emotional mess, and O was my go-to record. At 31, I am still an emotional mess, but in a different way, and this music no longer speaks to me at all. My Favorite Faded Fantasy is not an album designed to win new fans. At this point in the game, I doubt Rice gives a shit about that at all. It’s for those who have managed, somehow, to stick with him over the last decade plus—those that were able to grow with his music; or, simply those who will see this record mentioned in music press and see the name and go, “Oh that guy! I heard his music on ‘Grey’s Anatomy’ once and I liked it.”

This is certainly not the worst record to be released in 2014. But it’s also not going to really reignite me interest in Rice’s career or canon. Believe it or not, I find it slightly reassuring that after a self-imposed exile, dude managed to find it within to make another record. And despite the fact that Rice still leaves much to be desired as a lyricist, he is still able to write a catchy hook—even though “I Don’t Want to Change You” is just awful…that refrain just gets stuck in your head somehow.

Even with how overwrought this record is, it’s not unlistenable. It’s just that I hurt my eyes rolling them so fucking hard a few times. It’s not without it’s moments. The overlapping voice thing in “It Takes A Lot to Know A Man” was by far the most memorable thing on here; and “Colour Me In” tries (and almost succeeds) at recapturing that super raw sound, mixed with lush orchestration, that Rice found very early on in his career.

My Favorite Faded Fantasy is not a game changing record, or a career re-defining opportunity for Rice. More than anything, this will be remembered as the record that Damien Rice made after an eight year, self-imposed exile; it won’t be remembered for the content within the record itself. For a singer who dipped into light misogyny with his lyrics in the past, as well as a whole song dedicated to being basically “friend zoned,” this stops short of being a mea culpa of sorts but it is coming from a slightly different place—a guy who has spent almost two decades making music, walking away from big things, only to find his way back on what he’d deem his own terms.

My Favorite Faded Fantasy is out on November 10th via Warner Brothers.