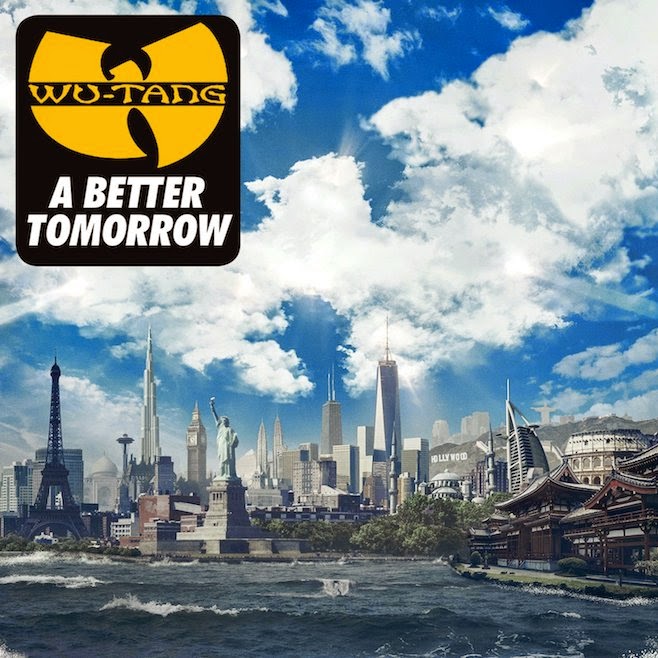 I kind of can’t believe that we’re here, at the ass end of 2014, with the sixth album from the Wu Tang Clan, A Better Tomorrow. First, it’s kind of hard to believe that for a group active for over 20 years, that they only have six albums to their name. And second, for a project that has been gestating for two and a half years, that the Clan actually was able to make it happen. But just barely.

The history of the Wu Tang Clan has been told countless times, and it is both fascinating and tragic. Beginning with Enter the 36 Chambers, de-facto leader the RZA had a vision for the group’s domination of the music industry—and to an extent, it worked: structuring the group’s contract so that individual members could pursue solo contracts on other record labels. Leading up to 1997’s Wu Tang Forever, the marquee name members of the group started solo careers—Method Man, Raekwon, Ghostface Killah, the GZA, and of course, the Ol’ Dirty Bastard, while the second tier members of the clan toiled (and still continue to toil) in relative obscurity.

After Wu Tang Forever, it all kind of fell apart, and despite their best efforts, the Wu Tang Clan have never been able to put it back together. Egos, money, drugs—it’s your typical “Behind The Music” situation, but in this case, it’s nine people that someone is trying to wrangle, and at times, it seemed like it was too much.

Talks of a “20th anniversary” album for the Wu Tang Clan started in 2012. But it was just that—talk. And those talks continued into 2013, which was the real 20th anniversary of the group’s landmark debut LP. And then 2013 came and went, with no Wu Tang album.

Holding things up considerably, I guess, was the animosity between Rakewon and the RZA, which was well documented in the music press; as well as the RZA calling out a few other members for their lack of interest in contributing to the album. Eventually the two patched things up, to some extent, and the recording of A Better Tomorrow continued.

Recorded independently with the RZA fronting upwards of half a million dollars to pay for the record (none of which he will recoup) the record was picked up by Warner Brothers, and slated for an end of the year release—a time when big albums by big artists are scheduled for the holiday buying season.

Here’s the deal with that, however—in 2014, the Wu Tang Clan are known more as a “brand” than recording artists. I’ve talked about this before—you can buy Wu Tang t-shirts at Target for $12.99. But when you wear one of those shirts, the chances are good that nobody will recognize the group’s iconic logo. Due to the group splintering for a better part of the 2000s, the name doesn’t have the recognition within the mainstream consciousness that it once did, and still should.

So, as I said before, here we are, at the end of 2014, with a new Wu Tang Clan album in our hands. And here’s the short of it—A Better Tomorrow is without a doubt, one of the worst albums I have ever heard. There are songs that are completely unlistenable. Production wise, it is a hot fucking mess. It’s bloated from the word go—live instrumentation and unoriginal beats take over for what was once the RZA’s innovative sampling song structures, leaving this album sounding incredibly generic and ultimately forgettable.

With a bulk of the production being handled by the RZA, it seems like over the last 20 years, he forgot about what made the group so interesting to listen to in the first place. Gone are the gritty, dark, claustrophobic beats pulled from kung fu movie samples and jazz records. Gone are the custom pre-amps for each member’s vocal tracks so that everybody had their own unique sound on the mic. It’s been replaced with tracks that are weighed down by so much excess there is little to distinguish who is actually rapping and what exactly is happening on some of these songs.

The main issue with A Better Tomorrow is that there is just entirely too much Method Man. Meth was always supposed to be the “break out” star of the group from the beginning, and it was his solo album, Tical, that was released first in the golden age of Wu Tang solo efforts, coming a year after Enter The 36 Chambers.

Of the “marquee name” members of the group, Method Man has always been my least favorite. Less known for rapping now as he is for acting, or just smoking a fuck ton of weed, Method Man dominates a bulk of A Better Tomorrow—which is a double-edged sword: showing that even as one of the most successful members of the group, he’s still a “team player,” but the flip side to that is, giving the most successful member of the group a ton of time on the record still shows the problems within the Wu Tang hierarchy.

The problems with A Better Tomorrow—bloated and excessive production, flaccid lyrical delivery—arrive right out of the gate on the first track, “Ruckus in B Minor.” Opening with a self-referential nod to the group’s debut, the track begins with a cut and paste introduction by the Ol’ Dirty Bastard (RIP), before second tier member Inspectah Deck drops an embarrassing verse including 12 awful pop culture references, some of which make little to no sense. This is all before Method Man arrives to deliver the hook, consisting of him saying “We’re still number one” over and over again.

Shortly after that, it’s the unlistenable “40th Street Black/We Will Fight.” Seriously.  I’m not joking. I skipped this song multiple times because I just couldn’t do it. Later on, it’s the cringe inducing “Miracle,” featuring the vocal stylings of somebody simply named Nathaniel. And I mean sure Nathaniel has a “nice” voice and dude is just singing his motherfucking heart out. But when I listen to the Wu Tang Clan, I don’t want to hear some R&B cat singing the hook. I want to hear someone screaming “BRING THE MOTHERFUCKING RUCKUS” over claustrophobic, dirty, spooky basement produced beats.

Here’s the real issue with a Wu Tang Clan album being released in 2014—it’s not the same group as it was 20+ years ago. Ol’ Dirty Bastard has been dead for a decade, and you’ve got “honorary” members like Cappadonna in the fold now, changing the group’s dynamic.

You’ve also got egos and 20+ years of history—both good and bad—with the remaining eight original members of the group.

You want the RZA’s production to be as sharp and innovative as it was in 1993, but is he even capable of producing a beat like that anymore? And if he really did produce a beat like that in 2014, would it still be unique or would it be written off as derivative?

That’s the fine line an act with such a long legacy walks when they release a new album. Do you continue to put out sub par material to damage your legacy? Or do you attempt to extend your longevity by keeping your name on people’s tongues? Is it better to burn out than to fade away?

It seems like a low blow, but I do really wish that there were a better tomorrow for the Wu Tang Clan with A Better Tomorrow. This will only be remembered as the Wu Tang album that took over two years to create, and almost didn’t even happen in the first place. The songs themselves are not memorable—lyrically there is nothing that will endure the test of time like, oh, I don’t know, pretty much any word uttered on Enter The 36 Chambers. The odds of this bunch getting their shit together again anytime in the next seven years to put out another record are incredibly slim. If this is the final chapter to the Wu Tang Clan, it’s a sad, underwhelming final chapter to a book that many people probably thought was finished a long, long time ago.