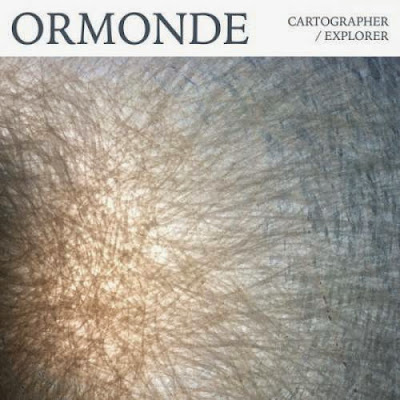 Ormonde’s second full-length album, Cartographer/Explorer, came around at just the right time of year. You see, despite the fact that the calendar claims winter doesn’t start until the end of December—winter is actually here right now. It gets dark around 5:00p, there’s snow on the ground, my breath hangs in the air, and everyone is miserable.

On Cartographer/Explorer, the duo—comprised of singer/songwriter Robert Gomez and former Trespassers William frontwoman Anna Lynne Williams—take some of the brooding mystery found in moments on their debut, Machine and expands on it greatly—something that is apparent from the album’s first two tracks: “Beach” reveals itself slowly and deliberately, unfolding over the sound of cavernous guitar reverb; and “A Grand Design” creeps along somberly to the trudge of an effected drum machine, with both Gomez and Williams contributing vocals that evoke ghostly imagery.

The album itself is the sound of the band growing, and overall, it has a much more overall cohesive feeling in comparison to their 2012 debut. Gomez and Williams have an interesting pattern when working on these Ormonde records: they record them in Texas in a short period of time, and then they gestate for roughly a year before the band releases them. Machine was apparently written and recorded when the two weren’t even that well acquainted yet, which may explain the slight lack of focus.

Cartographer/Explorer does a pretty astounding job of creating a claustrophobic (“Collapse”), foggy (the titular track), and at times dreamy (“Fast Forward”) atmosphere—and it does so in such away that it’s not an oppressive listen. In fact, it’s a very subtle, restrained record. Williams’ most recent solo effort released under her Lotte Kestner moniker, last year’s The Bluebird of Happiness was a somber affair—perfect for a cold, lonely night if you live in a small apartment by yourself.

In slight contrast, what she’s done here with Gomez is craft a record that takes you out of that apartment into the cold dark night. On Bluebird, there was maybe a sense of hopefulness however. Here on Cartographer/Explorer, you aren’t hopeless by any means, but it’s a set of ten songs that are all tension with little, if any release. And it’s a feeling that you come to terms with rather early on in the record, riding it until the very minimal strains of the closing track, “Bled Out.”

Cartographer/Explorer is out now on CD via Gizeh Records. The vinyl edition will be out later in November. Order either from the band themselves.