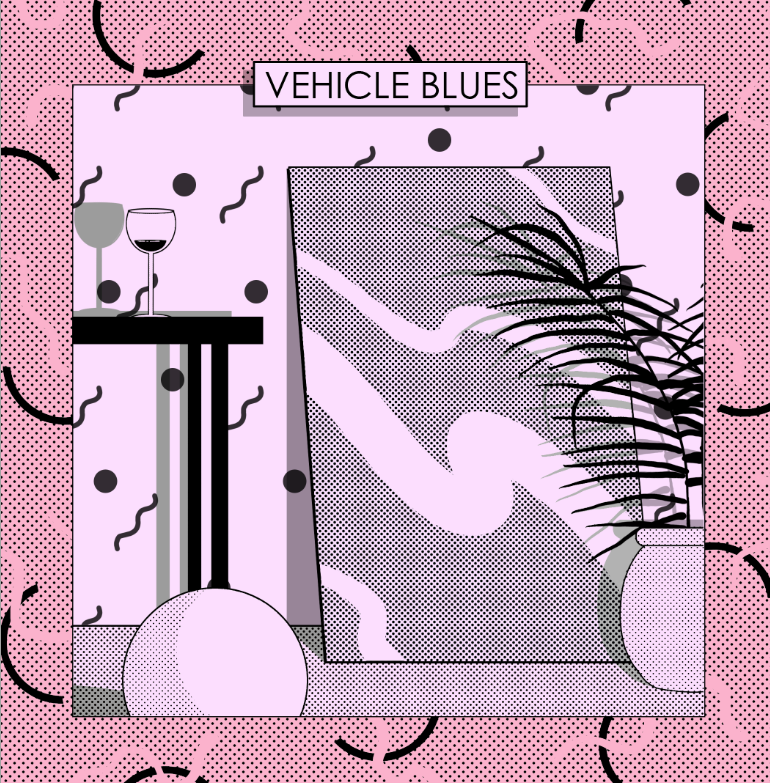 I’m not exactly sure why I slept on this new 7” single from Vehicle Blues for the last month or so, but needless to say, it was a foolish decision on my part to do so.

About two and a half years ago, once I started to fall into the abyss of discovering tape labels, I happened upon the Chicago based Lillerne Tapes, run by the man behind Vehicle Blues, Gabe Holcombe. Holcombe has released about a dozen or so Vehicle Blues cassettes—as either part of a split effort, or on his own, and coming off of the Letter Writer EP, released earlier this year, he’s really polished up the rough home-recorded edges of his sound for the three songs that are included on the “Luke Song” single.

Many years ago, Holcombe put out a song called “Real Loner Shit,” and after allowing this single to sink in, I’d say he’s coined the descriptor for a new, theoretical genre. Vehicle Blues has always had a noise-pop, shoegaze aesthetic, but on this single, specifically on the title track, the sadness is just straight up palpable.

Like any good shoegaze, Holcombe’s vocals are buried deep within the already murky mix, so there aren’t any particularly sad lyrics that I can pick out—it’s just an overall feeling that is created. On “Luke Song,” between the reverb-drenched vocals that border on sounding like a plea, and the downcast, slow motion guitar chord changes—it’s such a simple structure, but it all falls together to evoke a beautiful, devastating sense of melancholy, packing a surprising amount of emotion into a four and a half minute pop song.

Musically, “Luke Song” is interesting because it reminded me a great deal of the single “Way Too Much,” by the Los Angeles-based hazy rock band Sneak Peek. Though on their song, the overall sense of sadness is actually replaced with a more optimistic feeling. Here, there is not much optimism to be found.

The overarching sadness continues onto the b-side of the single, with the equally as somber “Waving Steps,” before wrapping up with the slow burning echoes of “4 Tues.”

Not exactly a “feel good” release for the summer—but maybe if you’re having a bummer summer like I am, this could be the soundtrack to all of your longing and near emotional meltdowns. Either way, the “Luke Song” 7” is incredibly listenable and accessible—specifically if you have a penchant for all things shoegaze. With only three tracks, clocking in at like 10 minutes total, it’s all too easy to start it up again after the final, fleeting moments of “4 Tues” fade into the distance.

The "Luke Song" 7" single is out now via Lake Paradise Records.