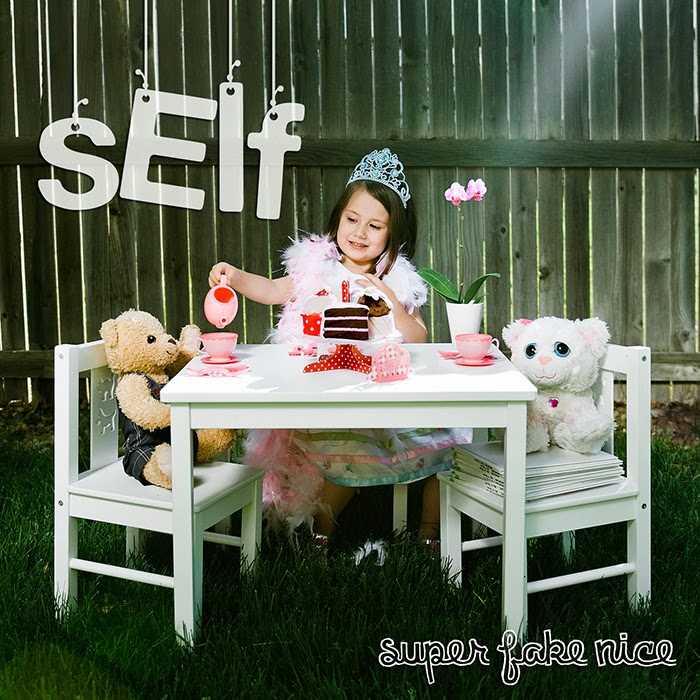 Capitalizing (to some extent) on the renewed interest in the Self project, thanks to Fat Possum reissuing the band’s debut LP, Subliminal Plastic Motives, back in January, Self mastermind Matt Mahaffey has revived the moniker after 14 years of relative inactivity, and has #blessed us with the Super Fake Nice EP—a slice of pure pop music perfection that is both incredibly dense and complex, while still maintaining the coy, self-aware sense of humor that Mahaffey is known for.

Explaining his absence in a recent interview/profile on Vice’s music site, Noisey, Mahaffey has spent a lot of time writing music for cartoons, and I guess he also is the guy who wrote the “Expedia dot com” jingle.

Knowing that when you go into Super Fake Nice, it’s not hard to hear that focus on accessibility in these six tracks. They are all incredibly concise, with the longest track (“Runaway”) clocking in at 3:20; they all boast amazingly crisp and pristine sounding production values; and, last but certainly not least, nearly each track is alarmingly catchy—with “Runaway,” “Gonna Rock,” and “Hey, Hipster” leading the pack as far as creating an “ear worm” goes.

While some tracks are slightly more successful than others, there is nothing that I would consider to be a bad song on Super Fake Nice—I’d go so far as to say that the EP’s first single, “Runaway,” is a strong contender to be my Summertime Jam of 2014. Rarely do you hear a song that is so fun, catchy, and executed so effortlessly—and it’s all crammed into slightly more than three minutes. I’d say that this whole EP is a  “top down/speakers up” kind of listen, but then you’d miss out on some of the subtle, yet mind blowing production details that Mahaffey has poured into it.

As effortless and as fun as Super Fake Nice comes off as at first glance, take a closer listen with headphones, and you’ll hear just how big of a collection of songs this really is. The attention to detail is meticulous: including, but not limited to the compressed, blown-out drums on “Looks and Money,” the striking multi-tracked vocals on the refrain to “Gonna Rock” (calling to mind the layering Michael Jackson used to have a penchant for,) and the general precision in the rhythm to the clever, tongue-in-cheek “Hey, Hipster.”

Having a sense of humor but being able to taken seriously is a tough balancing act, and over the course of the twenty years since Subliminal Plastic Motives was release, Mahaffey has only gotten better at it. Super Fake Nice is both a fun and funny listen; captivating it how clever it can be both lyrically as well as musically. It’s intelligent pop music that exponentially more advanced than anything you would hear on a Top 40 station right now.

Super Fake Nice is out now as a digital EP, and will be released physically this fall on El Camino Media.