A Book You Read Once: Helmet's Betty turns 20 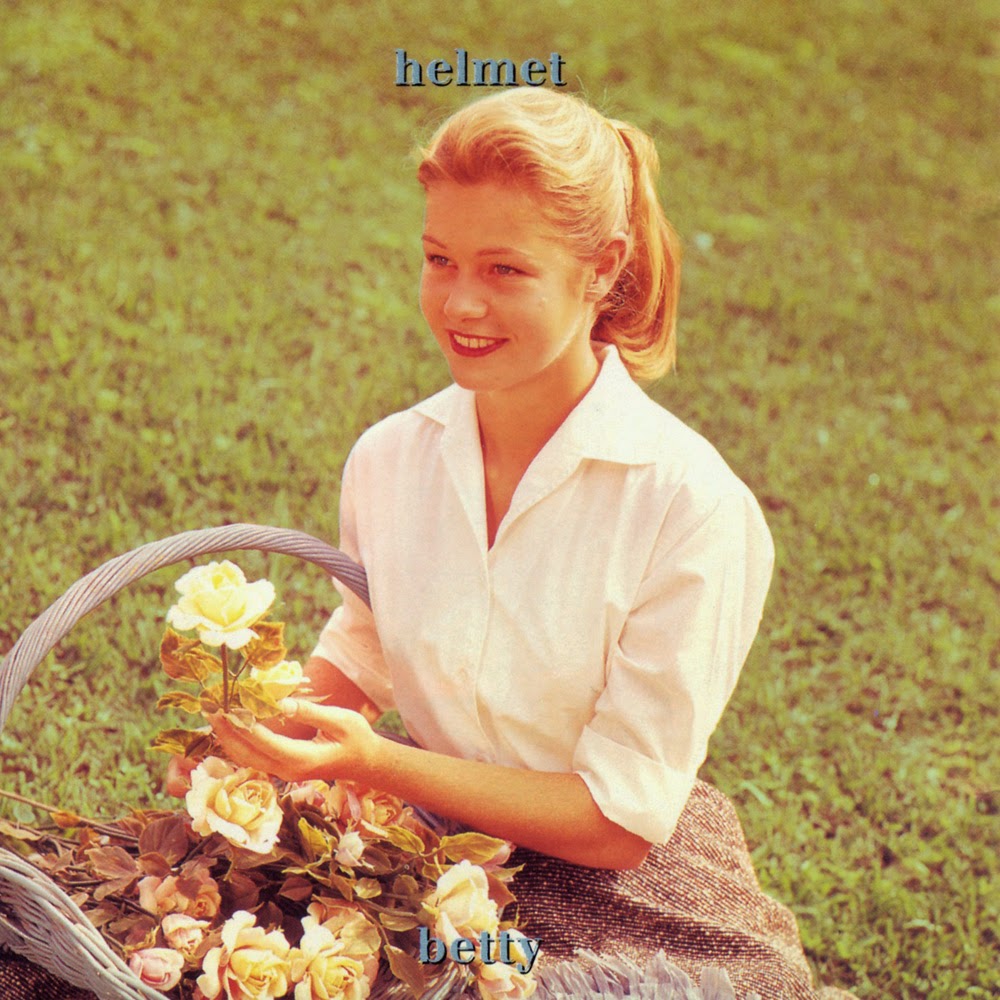 In the pre-Internet world of 1994, I don’t really remember how I heard about things—bands, specifically, I guess. The obvious way would be through MTV, because in the dark ages, twenty years ago, they still played videos, and had only just started dabbling in original programing. Another way would have been advertisements in comic books, or in magazines. When I was 11, I don’t think I had started reading Rolling Stone yet, but I do remember loving an “edgy” fledgling, short-lived publication named Flux.

Another way would have been through soundtracks—specifically in this case, the soundtrack to the motion picture The Crow, which is how I’m fairly confident I was introduced to the hard-rock outfit Helmet.

Far from what you’d probably refer to as a “seminal” record, the band’s third full-length effort, Betty, is twenty years old now. And before hitting the road on a European nostalgia tour where they play the album from start to finish (a common thing for bands to do now to get you out of your home to see them), the band is touring as part of a package deal with other 90’s “alternative” rock outfits Local H, and Filter, where they will be hitting such places as the Olmsted County Fair in Rochester, MN. And no offense to any of those bands, but that’s kind of a sign of how far their stock has fallen over the course of roughly the last 15 years, give or take.

I’m choosing to revisit Betty now, twenty years later, not because it’s one of my favorite records of all time, but last summer I did go through some kind of Helmet revival, where I re-purchased three of their four original albums released before disbanding in the late 90’s. Also, I have a very vivid memory of purchasing Betty on CD from my local Wal-Mart right around the time it came out, and I have a vivid memory of being surprised that a place like the Wal-Mart in Freeport, IL would have this album.

The 90’s were certainly a different time, weren’t they?

Prior to this, I had disappointedly purchased a 4-song EP of Helmet’s early material—the Born Annoying EP was the only thing by the band that the big box Music, Movie, and Book store Media Play had when my family and I had gone there recently, with my hard earned allowance burning a hole in my pocket. And since I was, you know, 11 at the time, I wanted something with a song I knew on it—the band’s track “Milktoast” had been featured on the aforementioned Crow soundtrack.

What I didn’t realize then, and wouldn’t for another three or so years, was how Helmet progressed from a very brash, shouty, post-punk sound, peaking with it on their full length Strap it On, before easing into a slightly more melodic, if not slightly less-abrasive style by the time their major label debut arrived in 1992.

In comparison to the somewhat accessible, yet hard-edged rock sound of Meantime, Betty comes off as a little looser. It’s front loaded with all the “rock” songs, but towards the end, it doesn’t so much lose steam as it does meander a bit, and it grows a little too experimental and precocious for its own good—I’m directly looking at the free-form jazz leanings of “Beautiful Love,” the oddball funk on “The Silver Hawaiian,” and sloppy, jokey “Sam Hell,” a bizarre, rhythm-less stomp that closes up the album.

Similarly to an album like Superunknown, Helmet’s canon hasn’t aged poorly (well, for the most part) but it also isn’t something I’d consider timeless. Betty, specifically, when put on today, twenty years later, sounds like it’s been pulled right out of a time capsule.  The guitars are hard and heavy, crashing down on you like a warm, detuned ocean (like the opening riffs of “Speechless.”) And the production on the drum kit is so quintessential of the time—the forceful, violent snare hits, the distant crashing of the cymbals, and then the somewhat flat sound on the bass drum—I liken the give and take between the bass and snare almost like a basketball being rhythmically bounced in each song.

There’s also some questionable studio trickery on frontman Page Hamilton’s vocal track—a trend of the era, I guess—with a watery filter on “Clean,” and then some kind of digital warbling on “Rollo.”

It took me until I was roughly about 13 or 14 until I really understood that albums were meant to be listened to (and hopefully enjoyed) start to finish. Until then, I had been the kind of listener that would only play the singles or popular songs off of a record, rarely bothering to sit with something all the way through. With the way Betty is structured, I have memories of listening to the first half of it, but my familiarity with it stops after the song “Tic.” As a whole, Betty is not, like, a GREAT album. It occasionally can sound a little generic at times, and indicative of the times as far as what “rock” music is supposed to sound like. But it obviously made some kind of a lasting impression on me as a kid for it to be something I revisited at 30, and felt the need to write a thinkpiece on as it turns twenty years old. I mean, thinking about the aggressive desperation of “I Know,” with Page Hamilton shredding his voice, resigning himself to basically unintelligible screaming by the end of the song, along with the interesting drum pattern that structures the song—that’s what really brought me back to the band in the first place last summer.

In revisiting Helmet’s select discography, I find myself in the similar place I was in when I went back to The Downward Spiral and The Fragile at the end of 2012 and start of 2013. It’s music that I didn’t carry into my adult life, but to some extent, stuck with me.  I’m not ashamed to admit that I listened to Helmet when I was a kid, but enough distance has grown between myself and whatever attracted me to heavy music like this, that it’s not the kind of then I can embrace wholly now, pushing 31. I mean, I can embrace it enough to buy a used copy of Betty off of Abundatrade for like .01 and the cost of shipping, but do I like Helmet enough still to go see them at the Olmstead County Fair?

(The answer is probably no.)