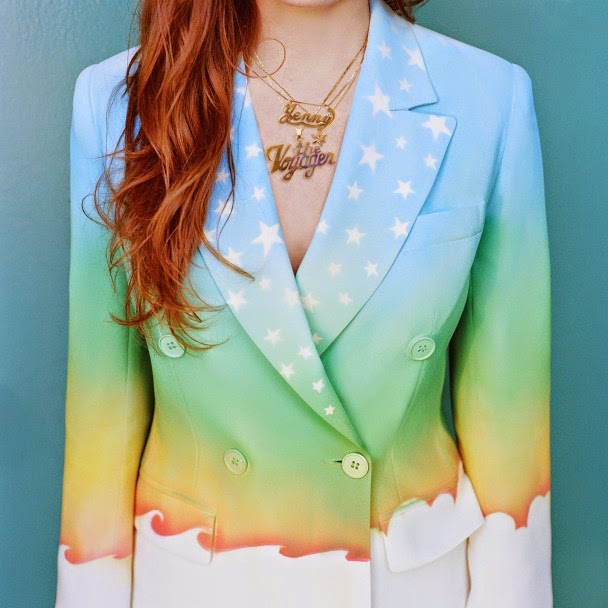 For me, things with indie rock chanteuse Jenny Lewis took a turn in 2008, when she released her first solo album (apparently her 2006 LP with The Watson Twins doesn’t count.) I remember listening to Acid Tongue over the stereo at the bookstore I was working in at this time—we sold the CD in the store, and the more I heard of it, the more dismayed I was by how completely uninteresting and boring it was.

Cut to two years later, when she released a collaborative LP with her boyfriend Jonathan Rice—I’m Having Fun Now. Sure, the lead single “Scissor Runner” was catchy, and sure, the follow up single “Big Wave” was okay, but as a whole, the album failed to deliver, and other than those two songs, I don’t remember anything else about it, save for that tinted red cover art of the both of them, but primarily focusing on Lewis, looking disinterested, siting on the pavement.

Basically, I just wanted Jenny Lewis to make another album similar to what ended up being Rilo Kiley’s swan song, Under The Blacklight—one of the few albums that I can name off hand that has an uncanny grasp of the history of contemporary popular music. Yes, okay, in the last seven years, there are parts of Under The Blacklight that haven’t aged well—and yes, there were parts of it that weren’t all that great from the get go (looking specifically at “15” and “Smoke Detector.”) But the entire first side of that album is pretty much unfuckwithable. Even Blake Sennett’s single contribution as vocalist, “Dreamworld,” is pretty dope.

Aside from the Jenny and Johnny album, and the official word that Rilo Kiley was all finished up, Lewis has remained somewhat quiet in recent years, but she has returned again now as a solo artist, dropping her 2nd LP, The Voyager, an effort that, in spanning ten tracks, shows some growth musically speaking, but lyrically, there are some flat out cringe inducing moments that give reason for pause.

Copping some Fleetwood Mac vibes as she did on Rilo Kiley’s “Silver Lining,” The Voyager opens with the smooth, slightly soulful sounds of “Head Underwater,” which turns out to be one of the album’s strongest tracks—and as “The shit got real,” Lewis sings early on—the song also serves as a bit of a thesis statement for the self-referential lyrical content of the album.

When she was still fronting Rilo Kiley, part of their compelling backstory, or whatever, was the disintegration of her relationship with (and later, disdain for) the group’s co-founder and guitarist, Blake Sennett. On Under The Blacklight, there are some truly heartbreaking slices that you have to wonder if they were directed at Sennett—“I never really loved you more,” she sang on “’Till The Angels Come Around.”

There’s plenty of that pseudo-jealous former lover flow on The Voyager, and it’s tough to tell how much of it is really autobiographical: “I heard she’s having your baby, and everything is amazing,” is a very pointed line from the aptly titled “She’s Not Me,” a song that later, Lewis sings, “Remember the night I destroyed it all, and told you I cheated? Then you punched through the drywall.”


Structurally, The Voyager is frontloaded with its finest material—the first three songs work the best. The longer the album goes on (and it’s really not that long) I wouldn’t say “the worse the album gets,” but the songs become less effective, both musically speaking, and from a lyrical standpoint. The conceit of relationships that have fallen apart, men she’s cheated on, and getting older in Los Angeles kind of wears thin after a certain point. And on a song like “The New You,” you can’t help but wince on the opening line of, “When the twin towers fell, and it all went to hell,” because sure, why not? Blame 9/11 for the end of your relationship.

The Voyager is by no means a great listen, but it is also not completely unlistenable. Given Jenny Lewis’ love of all things sun-soaked and California, it should not be surprising to hear that the production values are crisp and warm, similar to that faux-vintage sound Beck sought out earlier this year; and even with Lewis favoring a very specific sound—not so much country rock, but close at times—that is not to say that The Voyager isn’t without its modern sounding touches.

Even with all of its faults, Lewis still tries (and succeeds) in making a record that is, if nothing else, fun to listen to once through, but it is not the kind of album that begs to be revisited often, if at all.

The Voyager is out on July 29th, via Warner Brothers.