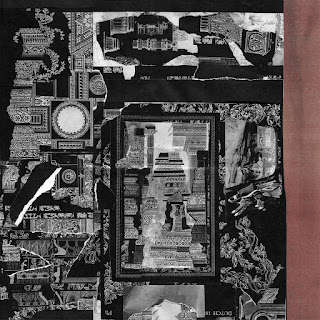 These kids are just a hair older than Loveless.

But that youthful exuberance shows through clearly in the debut release from Portland’s Hausu, Total. Recorded over a two-year period, Total has an incredibly cohesive sound. The band self describes the album as “time-tested rock-music.” And while you can most definitely hear influences running rampant through Total, don’t write off Hausu as just a bunch of kids copying their favorite artist’s style. They are quick to note that they attempted to go much deeper than emulating a sound, but rather “searching for the small, indescribable things within” that made those artists mean something to them in the first place.

Total is heavy duty. Hausu have been described as post-punk, or post-hardcore. Whatever they are, they certainly come after something else has already happened. You can hear echoes of Sunny Day Real Estate, and in other blurbs about the band, the expression “early SST punk” gets thrown around (very early Sonic Youth and Dinosaur JR, for example.)

And yes, on the album’s opening track “Chrysanthemum,” (and also elsewhere) occasionally frontman Ben Friars-Funkhouser sounds a little like Robert Smith. But that’s totally okay, and kind of interesting when juxtaposed with the aggressive sound of the music. You can make comparisons all you want, or mention influences, but Hausu is a unique band, and Total is a very original sounding record.


Total at times can be quite beautiful—“Gardenia” has some kind of somber gorgeousness to it. It can also be loud and terrifying—“Vasari Joust” reaches some pretty hardcore levels of post-hardcore.

Total is co-released by Sub Pop offshoot Hardly Art, who are handling the LP and CD, while Bridgetown Records is handling a limited edition cassette copy. As I had mentioned in my piece on the Cousins LP (also a cassette on Bridgetown) I’m really happy that bands are making this kind of music right now. 20 years ago, when the members of Hausu were in diapers, they would be considered an “alternative rock” band. But now, that term is antiquated. An “alternative” to what, exactly?

Today, Total is an alternative to a vast majority of “indie rock”—the kind Pitchfork reps pretty hard, and then kind you hear on 89.3 The Current (if you live in the Twin Cities.) Bands that aren’t special, bands that have no discerning qualities about them, have similar, two word names, and all churn out the same bland and boring product. Bands that will be forgotten about within five years, when a new crop of acts with the exact same aesthetic arrive.

I’m not speculating that Hausu can last forever, but what I’m saying is that the ten songs on this cassette can last forever. There’s a brilliant timelessness within these songs—they walk a line that teeters between being quite lovely, and flat out wrathful. Total is an impressive debut effort, and it’s one of the more refreshing records released this year.

Total is available now on cassette courtesy of Bridgetown Records, or on LP/CD via Hardly Art.