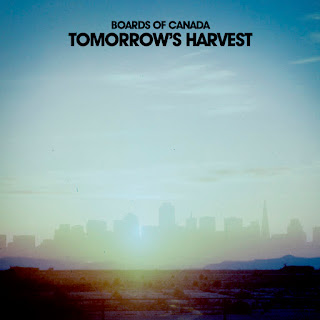 For a band that is nowhere near being a household name, Boards of Canada really went above and beyond to announce their new album.

It started on April 20th—Record Store Day—where mysterious, unmarked 12” records were placed in various record shops. Only two have been found, apparently. Each record contained a very small snippet of music, and each cover contained a number.

This lead to snippets being played on BBC Radio, a commercial during Cartoon Network’s Adult Swim programming, and finally, a password protected website. And after ALL OF THAT, it was revealed that the mysterious Scottish duo were releasing their first full-length LP in almost a decade—Tomorrow’s Harvest.

But the weird, mysterious stuff didn’t stop after that. There was a video premier for the single, “Reach For The Dead,” which was broadcast at midnight, on a building, in Tokyo. Then there was a four-song listening party at a defunct waterpark in the California desert. Because why not.

And finally, if that wasn’t enough, on Monday, June 3rd, the band live streamed the album in its entirety—effectively breaking the Internet.

Boards of Canada are on Warp Records—probably one of the “larger” independent label operating today, but their stable of talent isn’t really doing Arcade Fire or Queens of The Stone Age numbers. All of this promotion seems REALLY expensive, and even albums on major labels don’t get this kind of bizarre exposure. So the real question becomes—is this record worth the hype machine that has been constructed prior to its release?

Similarly to how Daft Punk used brief, mysterious bits of promotion to announce their new album, only to work people up to a fever pitch (it debuted at number 1 on the Billboard Top 200 Chart.) While Boards of Canada do not have the same widespread appeal as what Daft Punk is currently peddling, their marketing effort is certainly creating interest.

In comparison to their previous full lengths—Tomorrow’s Harvest has an overall darker sound to it. Specifically when compared to their debut, Music Has The Right to Children, which could be whimsical at times, and was full of laid-back, dope beats.  Almost every song on Tomorrow’s Harvest has an impending sense of urgency about it. While I was listening to it, I was watching my companion rabbits do whatever it is they do in the evening. And suddenly everything they did was soundtracked with this sense of immediacy—like them eating hay has never been more exiting as it is when “Cold Earth” is playing in the background.

There are also moments of triumph—“Palace Posy” evokes a feeling similar to that of “dlp 1.1” from the Disintegration Loop series. “Nothing is Real,” another stand out on the album, is more triumphant sounding, even it its simple repetition—it transcends to become jubilant.

The sequencing on Tomorrow’s Harvest is meticulously intentional—the songs ebb and flow, and as things head towards the end, the double shot of “New Seeds,” and “Come to Dust,” offer an impressive sense of finality.

“Jacuquard Causeway,” the album’s longest song, is also it’s finest. It comes early on, and it lures you in with its bitcrushed drums, and warm synth tones. And it’s the synth tones throughout that give Tomorrow’s Harvest a strange past meets future sound. Using analog synthesizers, some of these songs could have easily been made in the 1970’s or 80’s—but it’s all also very modern sounding at the same time. At times, there are aspects that are reminiscent to the Blade Runner soundtrack—if that soundtrack had been produced by someone with an ear for hip-hop beats.

Tomorrow’s Harvest is structured in a way that there are shorter, interludy pieces in between what could be considered the main “songs.” While there are stand out tracks to mention by name, this album is best digested as a whole, uninterrupted, from start to finish.

Overall, Boards of Canada have used heavily filtered photographs as their album covers. In today’s world of Instagramming every photo people take with their mobile phones, a photo like the one on the cover of Tomorrow’s Harvest is common place. But in listening to the record, and embracing the sensations it conjures, it’s obvious that this album can become the soundtrack for all of the Instagrammed moments in your life.

Tomorrow's Harvest is available in the US on June 11th, courtesy of Warp Records.