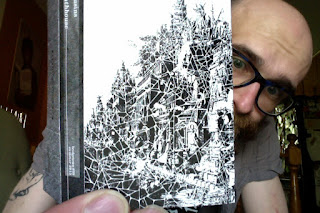 I’m really happy that a band like Cousins are making the music that they do in the year 2013. While there are some obviously modern comparisons and influences throughout their debut full length, Bathhouse, there is more than a distinct nod to indie/alt-rock bands of the 1990’s.

Hailing from Milwaukee, the ten tracks that make up Bathhouse are relentless—fast, sometimes sloppy post-punk. And for as gloomy they can come off as—thanks in part to the low and mumbly vocals of front-Cousin J. Wyatt—listening to this cassette is a lot of fun.

That’s right. I said cassette. Bathhouse is part of the Summer Batch of tapes from BridgetownRecords. And while it’s summer, this isn’t exactly “top down, speakers up” music. Bathhouse opens frenetically and noisily with “Abdicator, “ and only continues to build off of the momentum that comes with each song. “Brother’s Books,” is easily one of the most accessible, even with Wyatt’s semi-menacing vocals buried deep in the mix, musically, it owes a ton to upbeat post-punk that came before it—Icky Mettle-era Archers of Loaf and The Promise Ring. Elsewhere, on the album’s peak, “Drone,” you can hear echoes of the much beloved yet always underrated 90’s outfit Failure, and heading into the final tracks, on “Ackigahara,” where if the opening few seconds aren’t a wink towards My Bloody Valentine’s “Only Shallow,” I don’t know what is.


And all this name-dropping and comparison isn’t a bad thing, and it’s not done to take away from the talent that Cousins certainly have. And it may certainly be unintentional that the band displays its influences so prominently on the duration of Bathhouse.  To their name, to date, Cousins have one EP, one cassette single, and then this full length, so they are still a relatively new and young band. With the urgency they perform with and display on the ten tracks scattered across Bathhouse, it’s easy to expect them to grown more comfortable with their sound in the future.

Bathhouse is available now on cassette and as a digital download, courtesy of Bridgetown Records.