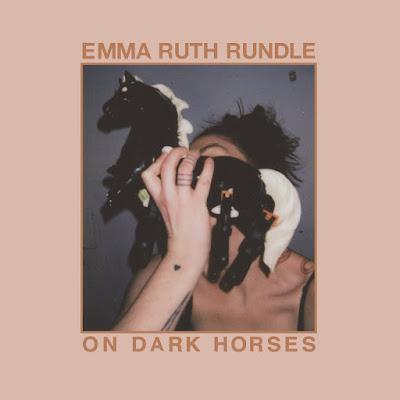 I don’t want to say that I use the debilitating depression I found myself in for a large portion of 2015 and most of 2016 as an excuse, or whatever, for sleeping on a lot of albums, but the poor state of my mental health during this time made it difficult to keep up the momentum needed to continually listen to and write about new music, let alone, like, get out of bed and function as a person.

One of the albums that I had downloaded and had every intent of listening to in the fall of 2016, when I was transitioning out of working for the paper, into working at the co-op, was Marked For Death, the sophomore album from raucous guitarist and vocalist Emma Ruth Rundle.

However, the album when unlistened to, and a review when unwritten—like so many others that have both come before it, and after it.

Rundle has returned, two years later, with her third solo full-length, On Dark Horses and after listening to it, two things are abundantly clear—the first is that I made a huge mistake by missing out on Marked For Death upon its release; the second is that, from the moment On Dark Horses begins, Emma Ruth Rundle is not here to fuck around.

Throughout the album’s eight tracks—it’s entirely too short, if you ask me—Rundle is unrelenting in her ability to channel an otherworldliness with her unhinged howl, as well as creating and maintaining a tone and atmosphere, allowing it to unfold naturally through the progression of the album, and making everything she does appear effortless.

Right out of the gate, when Rundle and her stable of players slam down on the pummeling and thundering first notes of the opening track, “Fever Dreams,” it’s apparent that Rundle—in her time spent as a solo artist, as well as performing in myriad outfits—is an expert at balancing tension and release. “Fever Dreams,” for example, like a number of other songs on the record, both snarls ferociously, and soars triumphantly. It’s a startling give and take—making these things occur within the same song—and it makes On Dark Horses an incredibly surprising, refreshing, and wholly original record.

Rundle structures On Dark Horses so that it isn’t so much frontloaded with its most compelling material, but the first half is pretty much unfuckwithable—a practically flawless run of four songs that are both accessibly written, but are also boiling over with a torrential, visceral nature. The album loses this momentum slightly after it hits the halfway point, beginning with “Dead Set Eyes.” It’s maybe also at this point in the record, five songs in, when the sound that Rundle has ultimately committed to for On Dark Horses, may lead you to believe things are beginning to come across as a little ‘samey.’

That ‘sound’ is really the album’s fatal flaw, but it’s also quite admirable just how strong Rundle’s brand is—overall, from album to album, but also specifically on On Dark Horses. In even just sampling her previous efforts, you can hear Rundle’s development of this haunted, borderline tormented aesthetic, and in this collection of songs, the aesthetic peaks.

While she snarls and soars on “Fever Dreams,” she commands cacophonic, furious blasts on “Control,” balancing those out with a quiet/loud/quiet structure to the song’s arrangement; with the album’s longest song, “Darkhorse,” the pummeling rhythm (thanks to drummer Dylan Naydon) powers the song forward, while Rundle creates a swooning, dizzying, and hypnotic environment, strumming out distorted and distended guitar chords like her life depended on it, speaking in disjointed, evocative imagery—“It’s the darkhorse we give legs to, no one else can ride; In the wake of strange beginnings, we can still stand high.”

As the album’s first side closes, she slows things down to a dreamy, hazy crawl with “Races,” repeating the phrase, “Nothing’s gonna stop us,” making it a mantra of sorts.

The high point of the album’s second side also happens to be its final track—it may not be where she snarls the hardest (that is saved, mostly, for the first half), but it is, without a doubt, where she soars the highest. In doing so, Rundle takes On Dark Horses to a place of unthought-of majesty—“You Don’t Have to Cry,” is, in a sense, the inverse of the visceral tension and anguish of the first side, swapping it out for a huge, sweeping, cathartic exhale.

It goes without saying that On Dark Horses is true to its name—it’s a dark record, with little, if any, light that is able to break through the world Rundle builds. It’s not sad, or hopeless, but it by no means a joyful collection of songs. In that darkness, Rundle thrives, however, creating relatively concise and focused songs that live in a pensive, tension filled, and at times dramatic environment. Rundle drenches everything in sight, including her voice, in layers of cavernous reverb, making it, at times seem like On Dark Horses is broadcasting from deep within the Earth, or from another plane entirely.

There are songs that can be taken on their own—removed from the context of On Dark Horses, but the album itself, I believe, is meant to be listened to as a whole, from beginning to end, connected by Rundle’s penchant for ominous and overcast tones, as well as similar themes that run loosely through each of the eight tracks. Through the crunchy distortion and seemingly endless and swirling echoes, with On Dark Horses, Rundle has established herself as a performer not to be trifled with, and has made a huge, mesmerizing, and surprisingly gorgeous artistic statement.