Album Review: Annabel (Lee) - From This Side 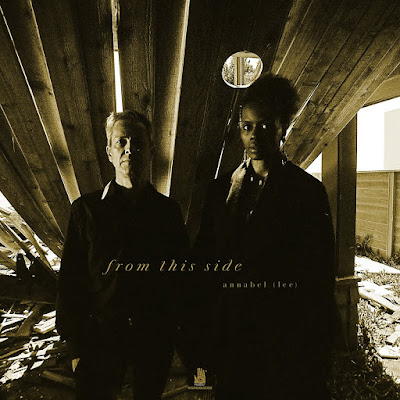 Arriving only six months after their sophomore album, The Cleansing, the once mysterious duo of Annabel (lee) have returned with a very brief three-song EP, From This Side, an effort that finds the pair moving further away from the other worldly and evocative sounds that comprised their startling debut, as well as further removing the enigmatic shroud that once surrounded them.1

From This Side is a relatively stripped down affair—both in the fact that it is a sparse three tracks, but it also finds Richard and Sheila Ellis using very little in the ways of additional instrumentation; long gone are the post-Portishead atmospherics that made their debut, 2015’s By The Sea…and Other Solitary Places such a compelling and haunting listen. Even when the EP concludes with the swooning titular track, and the duo Ellis finds themselves creeping slowly back into that unsettling territory, this time it’s done with dramatically arranged woodwinds and strings, as opposed to manipulated samples.

From This Side opens with its most playful track, “The Latest News,” which is cut from relatively the same cloth as many of the acoustic, jazzy tracks found on The Cleansing. It makes sense—both Richard and Sheila have a jazz based background. And yes, while the music is less inorganically atmospheric and slithering, the one constant that has carried over from their debut, into The Cleansing, and now into this EP, is the Ellis’ interest in the life (and death) of Edgar Allen Poe, his infamous poem “Annabel Lee,” as well as what could only be referred to as ‘the calling of the sea.’

The characters of “Annabel Lee,” along with Poe himself, find themselves in “The Latest News,” and the EP’s second track, the plaintively plucked “Down in Mystic,” both literally and figuratively plunges the listener into the depths of the water, evoking what the duo call the ‘sense of calmness one has when surrendered to drowning.’

By far, the EP’s most successful track is its closing moment, “From This Side.” “You were crying in your dreams last night,” vocalist Sheila Ellis sings as the song’s startling opening line. “I saw crystal tears in the moonlight. Could very well be, you had me in mind/After all this time…I know,” she continues, her ethereal voice floating in with the dense mix of sounds that swirl around her.

For listeners who have been following the Ellis’ since their debut three years ago, From This Side is a welcome addition to their small, but growing, body of work. It’s also somewhat of a pleasant surprise that it arrives so soon following their last full-length effort. The acoustic-based, jazz focused structure of a bulk of this EP is, for me, not as immediately captivating as the dark and cavernous places they explored on By The Sea, however, it is a concise release that, upon additional listens, opens up and begins to slowly reveal itself more.

1- It seems worth mentioning that, for a duo that were hesitant to use their full names or even give away much about their identities on their debut, it’s a pretty bold move to place themselves on the cover of this EP.

From This Side is available now as a digital EP, via Youngbloods.