The (final) Bearded Life - My Rabbit, My Daughter 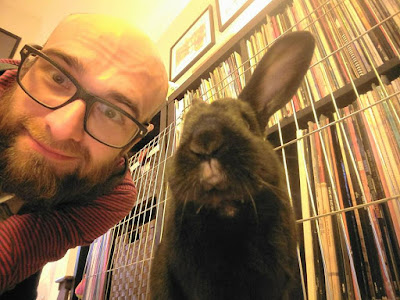 Since December, 2013, I've been writing a column entitled "The Bearded Life" for the Southern Minn Scene magazine. That is all coming to an end with the July issue of the publication.

Since it's a monthly column, I've fallen into the habit of sharing the current issue's piece near the start of the month. However, much to my surprise, what I submitted for July's issue made its way online late last week.

Perhaps that is because the person who is now in charge of the magazine is uncertain as to how to schedule website updates; perhaps it is because they are hard up for content on the website, and just wanted to put something up there.

Or, perhaps it is that they just want to be rid of me. And I don't fault them for that.

If you feel like giving the Scene website a click through, please feel free to follow this link. It's a bit underwhelming since none of the images I submitted along with my piece made it onto the site.

My Rabbit, My Daughter

A year ago, an acquaintance of mine shared a link on Facebook for an opinion piece titled “No, Your Dog is Not Your ‘Baby’—Saying That is an Insult to Moms.”

Published on a D-List Buzzfeed knock off, and written by a woman who is also responsible for essays like “Why I’m Still Nursing My Three-Year-Old,” the piece is, at its core, nothing more than click bait; a controversial hot take designed to rile up both sides of the discussion.

After I skimmed it, I provided my acquaintance with the helpful comment of: “This is the worst thing I have ever read.” I was never really sure where she fell in this argument—she has both a dog, and a young daughter. Eventually, she went on to delete the post all together.

The conceit of the piece is that being a parent to a human child is exponentially more difficult of a burden (and maybe more personally rewarding?) than caring for a companion animal. “You can mostly ignore your dog,” Elizabeth Broadbent, the author of the essay exclaims. “Five minutes of inattention on my part and my toddler’s drinking bleach and bathing in the toilet.”

Maybe I’m the wrong person to weigh in on this. Maybe I shouldn’t say anything at all.

I don’t have any children, and I presume that almost all children born are the result of an accident—a broken condom or a forgotten birth control pill. My wife is constantly reminding me that some people actually want children, a concept that I will never understand.

Broadbent is self-aware enough to realize that she is coming off as a self-righteous parent with what she’s written. And while she’s gotten herself all worked up on behalf of parents everywhere, she’s also insulted people who care about their companion animals more than other human lives, an audience she has no problem alienating.

I’m sure it’s tough to parent a human child; I can’t even fathom just how financially, physically, and emotionally draining it is. But what I do know is what seven years of living with companion rabbits has taught me.

Maybe you’re like me, and the term “pet” bothers you. Pet implies ownership, and I do not own my rabbit. She is not my property, and this is why I prefer the term “companion animal,” or the slightly more clunky “the rabbit that lives in my home.” Do parents feel a sense of ownership over their children?

Maybe you’re like me, and idioms that imply violence against animals upset you. You hear the expression “killing two birds with one stone,” and you think, “Why are we even throwing rocks at birds in the first place?” I would suggest another expression to use in place of it, but I believe the editors of this publication would deem it entirely too offensive for print.

Maybe you’re like me, and you have to hold back your disapproval and disconcerting looks when someone balks at the cost of veterinary care. It’s fascinating, because I highly doubt any parent out there would bat an eyelash at the price of medical attention for a human child.

As I’m sure you can tell by this point, there were a lot of things about Broadbent’s essay that bothered me, but the thing that got to me the most is this line—“You can mostly ignore your dog.”

You could do that, if you are some kind of garbage person. If you have a dog, or a cat, or a rabbit, or any kind of other animal living in your home, sure, you could ignore it; but why would you want to? You’ve brought their life into yours—the least you could do is spend time together. More than likely, the animal enjoys spending time with you.

Also, I’m fairly certain that negligent parenting is looked down upon, and is usually the kind of thing that government organizations eventually intervene in.

There are people who, when I am talking with them about my life with rabbits, will utter what has become one of my least favorite expressions: “They’re like family.” And it takes every fiber of my being to restrain myself from breaking that expression down, and asking them what is holding them back.

Used in this way, it becomes a metaphorical barrier for something much larger than the person who said it could possibly imagine. Maybe they don’t even realize what it implies, but to me, it shows that, sure, this person cares about the animal living in their home, but they don’t care as much as if they were talking about a human blood relative.

Just open yourself up to the possibility—your companion animal is family.

I probably shouldn’t get into the topic of people that adopt animals only to return them to the shelter or rescue organization they came from, or people that suddenly need to rehome an animal when they are going to move, or decide to have a child.

Recently, I was contacted by someone who only reached out to me because they knew I live with a rabbit, and they wanted information on how to rehome their own—this person had recently had a baby, and were concerned their child might be allergic to the rabbit.

So obviously, the rabbit has to go, and it was an arduous exercise in control on my part not to unload on this person until they were reduced to a sniveling mess.

The crux of Broadbent’s essay is to chide people who call companion animals “furbabies,” or “furkids.”

“Say you love your dogs,” she writes. “Say they make your life worth living…Call yourself a dog person. But don’t call your dog a baby…Because baby, it’s not even close.”

We have friends who referred to their dogs as “furkids,” but to my knowledge, I have never referred to our rabbit, Annabell, that way. I am a cool rabbit dad, and she is my rabbit daughter. To her, I hope I am more than just the white guy that knows how to get the cilantro out of the fridge. I know I am—I know it in the nose boops, face bonks, and smooches she gives to me.

I am not cut out to be, nor do I want to be, a father to a human child—for a number of reasons. In Broadbent’s conclusion, she claims people like me would make our feelings “germane” to the discussion, but to her, that is “neither here nor there,” which leads me to believe that she is the type of internet writer that can dish it out but is unable to take it.

I see why parents would want validation for their choices to bring a child into this world (remember, no child asks to be born), so as fun as it has been writing an 1,300+ word hot take as a response to Elizabeth Broadbent, I understand why she was so worked up in the first place—her bio claims she has three children (as well as two dogs, both of whom she probably loves less than her children.) However, she seems unwilling to see both sides—that respect, patience, family, compassion, and kindness come in different forms, and in the end, those are the things that I’ve learned from seven years of living with rabbits.

I still may never understand why someone would want to have children; she may never comprehend the deep love I have for Annabell, but the common ground that I am willing to acknowledge is that parents, to both other humans and companion animals, care about someone else in ways that words can’t begin to articulate.

So, baby, maybe it is that close after all.
Labels: companion rabbit personal essays poorly written thinkpiece southern minnesota scene the bearded life