At the end of April, my editor at the Southern Minn Scene magazine—who was in the middle of trying to assemble the June issue of the publication—was unceremoniously laid off.

It was part of a company wide downsizing, and he was told it was being done as a ‘cost saving measure.’ His duties, he was informed, would be split up among two or three other people.

Needless to say, it has been a strange, disappointing, and frustrating couple of weeks since he was let go.

I was going to write a big, long thing airing out all of my sour grapes with the situation, going into detail about how poorly everything has been handled in his absence while, despite my best efforts, all I can do was sit idly by and watch the slow, painful demise of morale among the writers, along with the decline of the magazine itself.

However, writing something that lists my many grievances is really just petty and bitter, you know? I should just learn to be like that bitch from Frozen, and let it go.

And truthfully, who would want to read all of that anyway? Who wants to read something about how a bunch of freelance writers are being treated poorly under the management of someone new?

My guess is that nobody actually wants to read that, so here’s the condensed version:

Following my editor’s dismissal, and after watching just how badly things were going without him, it became very clear to me that I could no longer write for the magazine. I have written my column, “The Bearded Life,”since December of 2013. Originally conceived as an ‘observational humor’ column, it became a lot more than that—some of the time it wasn’t very funny at all, and that was something I struggled with over the last three years.

But, Rich Larson, bless his heart, he let me get away with it, and rarely, if ever, balked at anything I turned in to him.

The July issue of Southern Minn Scene will be my last. It’s an ‘animal/pet’ themed edition, so at least I am going out on somewhat of a high note. Along with contributing my column, I also wrote a long feature story. I don’t have a lot of confidence that they will be published online via the Scene’s website, but they will have a home here at the beginning of new month.

So, where are we going?

Following Rich’s dismissal, he went right to work on something new—The Next Ten Words; and he’s already seen an unprecedented success with one particular post w/r/t the passing of Chris Cornell. I hate to use expressions like “it went viral,” but seven million views later, how else can you describe it?

The Next Ten Words is currently gestating; Rich hopes to have the official website up and running in July. For now, he still wants to generate content—both his own, as well as from other writers, and it’s being housed on a Wordpress blog, aptly titled The First Ten Words. 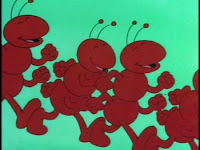 My first piece for The Next Ten Words, “I Have Had it With These Motherfucking Ants in My Motherfucking House,” went live on Monday morning. When I emailed it to Rich, his response was, “Is this the return of the humor column?” It’s funny, sure, but I can’t vouch for what is going to happen in the future. So laugh now, while you can; you may be crying later.

These on-going and regular contributions will be housed under the name “The Column of Disquiet.” It’s an extension of “The Bearded Life,” in a sense, but just not called “The Bearded Life.” For what it’s worth, the title is in reference to The Book of Disquiet, from Portuguese author Fernando Pessoa.

Also, for what it’s worth, please consider throwing a few bucks Rich’s way for the site. Contrary to what you may think, this shit doesn’t pay for itself. He, and I, would appreciate it.