Hot New Joint: "The System Only Dreams in Total Darkness" by The National 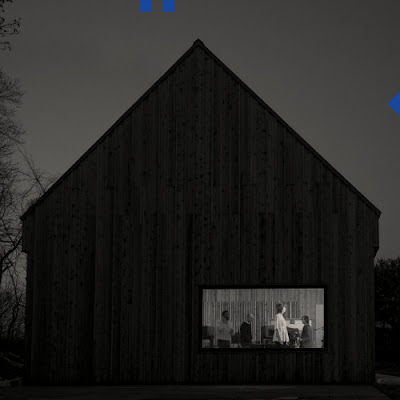 The National have been on my mind a lot lately.

Maybe because it’s spring—and, traditionally, the band has released a new album in the month of May; sometimes on my wife’s birthday. It is kind of what we’ve come to expect from them.

Last year, the group was holed up in the studio, and occasionally debuted a new song live at the smattering of shows they played, but National frontman Matt Berninger made a point of saying there would be no new National album until 2017.

This May is also the tenth anniversary of the group’s seminal fourth album, Boxer (thinkpiece coming soon), so I’ve been ruminating on what that album did for them as a band, and how they’ve continued to grow and mature in their sound in the decade that has followed.

The spring of 2017 is almost over, and The National have missed my imposed deadline for a new record; however, their seventh album, Sleep Well Beast, will arrive in September, and it has been preceded by the cumbersomely titled single, “The System Only Dreams in Total Darkness.”

The National’s last effort, 2013’s Trouble Will Find Me, wasn’t a bad record. It captured where the band was at that time, sonically coming to terms with that point in their career, and it relied pretty heavily on big, shout along anthems. From start to finish, the thing was a little uneven, and kind of slow moving at times. It did find them experimenting a little more with the band’s palate, which is what they seem to be doing with Sleep Well Beast, or, at least, the single.

Opening with a startling layer of processed female vocals, “System” is heavy on the synth pools, miscellaneous beeps and boops, drum machine clattering, and in the center of the song, it features a rather uncharacteristic (and somewhat polarizingly received) blistering guitar solo courtesy of Aaron Dessner.

The one thing that has become apparent over the last decade is that Berninger has grown more comfortable (well, as comfortable as he can be) with his role as a singer. Moving beyond Boxer, you can hear him finding more confidence in his vocal range and abilities, opting to sing more on High Violet and Trouble, as opposed to the speak/singing he did on the band’s earliest material.

In an interview w/r/t the single, Berninger described “System” as an “abstract portrait of the weird time we’re in.” Abstraction used to be the band’s strongest suite, and Boxer represents the last time his lyrics were truly hyper literate, abstract and evocative fragments, with both High Violet and Trouble Will Find Me seeing Beringer writing from a more direct and accessible place.

Is “System” self-aware? It’s tough to say. Does the line “We’re in a different kind of thing now” reference this shift and growth in sound? Perhaps. Does “We said we’d die alone of lonely secrets” call back to a lyric from Alligator—the infamous worry over blogger obscurity of “Bedroom kids who buy it for that reason” in “Lit Up?”

Maybe I’m just reading too much into it.

Either way, “System” finds Beringer making a slight return to that evocative, shadowy place, balancing abstract ideas and phrases with an incredibly direct approach. The National aren’t known as being a “hook driven” band, but “System” is incredibly rollicking, powered by an unrelenting and crisp rhythm that files itself in tightly underneath those layers of synth and that distorted guitar.

“The System Only Dreams in Total Darkness” is a big sounding song, from a band that’s capable of aiming for the rafters—however, it never quite reaches the explosive levels that other, anthemic songs by The National reach, and that’s okay; it gets to where it needs to be, and in the end it’s an exercise in minor restraint, finding that balance between direct and abstract, tension and release, bright and jaunty, and total darkness.

Sleep Well Beast arrives on September 8th, via 4AD. This song is an instant download when you pre-order the album from the band's webstore.
Labels: hot new joint new music review. single review sleep well beast the national the system only dreams in total darkness