'I don't need anyone, and these days, I feel like I'm fading away' - 20 years of 'Recovering The Satellites' by Counting Crows 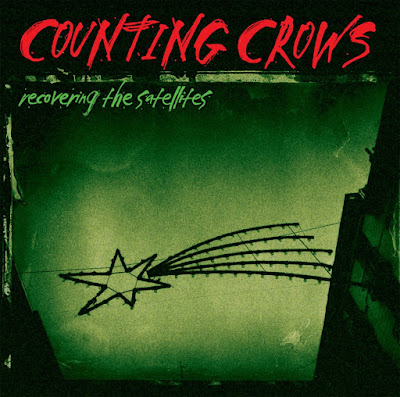 Everything, eventually, celebrates some kind of ‘milestone’ anniversary.

Things turn 10. Then they turn 20. And because everyone loves nostalgia, it’s become popular among internet music writers to go back and revisit specific albums on milestone anniversaries to discuss what the album in question has meant for them personally throughout their life, as well as to reevaluate the merit it may or may not still have.

Since the beginning of the year, I’ve had a running list saved as a sticky note on the desktop of my computer titled ‘20th anniversary think pieces,’ and I’ve done a pretty terrible job of keeping up with it. I blame that mostly on my former job writing for two newspapers (which made me not want to write once I got home) as well as my somewhat debilitating depression (which has always been a problem, but was exacerbated by working for the paper.)

I should probably be honest and realize that some of these on this list, I’m not going to get to—like ATLiens by Outkast, which turned 20 back in August. An important record in their developing career, I arrived, like 19 years late to the game on that one and am probably not qualified to write anything of value about it.

Tori Amos’ weighty third album, Boys for Pele, is another one that’s been on the list, which am maybe slightly more qualified to talk about—I was always aware of it growing up in the mid-1990s, but didn’t hear it for the first time until 2002 when I immersed myself in her catalog. It stood out mostly because of how strange it is, its length, as well the cohesion Amos created throughout the album.

Also, “Hey Jupiter” is one of the best songs she’s ever written.

2016 is nearly over, and these commemorative thinkpieces aren’t going to write themselves. So as I sit here on my day off from my new job, I thought I should try to tackle one that is coming up on its 20th anniversary next month and has been on the list since the beginning of the year. It’s an album that I have, some how, carried with me into adulthood.

On October 13th, 1996, I stood in a Target store, clutching a copy of Counting Crows’ Recovering The Satellites, the band’s sophomore album, set to be released the next day. I found it in a brown cardboard box that had been left in the entertainment department—the box itself included all of the Tuesday new releases.

I was, like, 13 at the time—an overweight eighth grader, and chances are I probably had money to buy it, but was more than likely not allowed. That was a common occurrence throughout my formative years—I would be in trouble for my grades in school, or something else, and would be barred from buying anything with my allowance.

I eventually went on to buy the album with my after-Christmas money, and because I was still young, and didn’t really know how to listen to music the right way yet, I only listened to the album’s singles—“Angels of The Silence,” “Daylight Fading,” and of course, the ubiquitous “A Long December.”

I was a fan of the band—I had spent many an afternoon three years earlier seeing the video for “Mr. Jones” on heavy rotation on MTV, and would continue to be a fan of the band through the release of their 1999 effort, This Desert Life.

When I was a senior in high school, I wound up rediscovering Recovering The Satellites. I wish I could remember why, or what prompted me to really dive into the album from start to finish, but I can’t. I just have a vague memory of driving through a backroad in the darkness, listening to “Goodnight Elisabeth” at full volume in the old white mini-van I drove after getting my license.

For an album that has cemented itself into my life for 20 years, I suppose I would say I am fairly well versed at it, however, to prepare myself for writing another commemorative thinkpiece, I sat down and listened to it from start to finish yesterday afternoon and I was pleasantly surprised by how well a majority of it has held up over all this time.

Sonically, it’s like a night and day difference between the band’s debut August and Everything After and Recovering The Satellies. Perhaps the idea of ‘music production’ came a long way in three years. or perhaps ditching T.Bone Burnett for Gil Norton served the band well in this instance. Structured around loud, ringing, crunchy electric guitars, the album attempts to, and succeeds in most cases, capture an unhinged urgency that is remarkably still present in the music today.

Volatile, dark, tortured, and paranoid—most people probably don’t think of those words when they think of Counting Crows, as well as their dreadlock’d lead singer Adam Duritz. They probably think of him, dancing around in a fringed jacket in the “Mr. Jones” video, or they think of the band’s later and more insufferable material, like their insipid cover of “Big Yellow Taxi.”

Or that song from the Shrek movie. 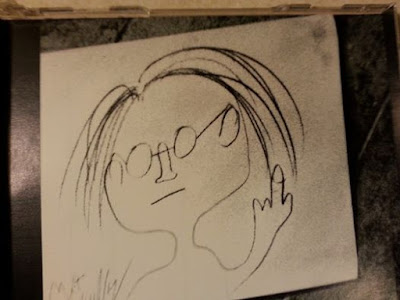 However, Recovering The Satellites is an incredibly volatile record. The band members themselves sounds like they are playing for their lives at certain points, and Duritz sings like he needs to get these songs out of him. Songs like “Angels of The Silence” and “I’m Not Sleeping” have an incredibly raw, visceral feeling to them—like they are on the verge of collapsing under their own weight and ambitions.

Arriving at an even 14 songs and clocking in around an hour, very little of Recovering The Satellites is unsuccessful, and as my recent listen indicated, the record only begins to lose steam near the end, before it’s saved by “A Long December” and the album’s epilogue, the short, acoustic “Walkaways.”

By 1996, Duritz was already some kind of adult-oriented alternative rock lothario, having bedded two of the three cast members of the show “Friends.” He’s always been a pussy hound (he probably still is) and his muse for this album is the torment that comes out of his failed relationships.

“All of a sudden she disappears—just yesterday she was here,” he sings as the album’s opening line in “Catapult,” the song that begins the album’s nearly flawless seven-song run. It seems like a long stretch to not have any points that falter, but somehow Duritz and company managed to pull it off—from bombastic, frustrated angst of “I’m Not Sleeping,” to the pensive, somber reflections of “Goodnight Elisabeth,” the sweeping, epic grandeur of “Children in Bloom,” and the ramshackle self-aware caterwauling of “Have You Seen Me Lately?”

The album doesn’t really “fall apart” per se in the second half, though the pacing changes drastically beginning with “Miller’s Angels,” a song that was said to have been written for the Sean Penn drama The Crossing Guard, but was rejected by producers. The songs’ infamous coda was written after the fact for the inclusion on the record.

Other latter material that hasn’t quite aged as gracefully include the meandering “Mercury,” the mostly forgettable “Another Horsedreamer’s Blues,” and the bland “Monkey,” which does, however, include a very early shout out to Ben Folds, in a pre-Whatever and Ever Amen world.

This album, and the band, are probably best known for “A Long December.” It’s one of their best, and despite its wordless refrain, Duritz really hits his stride at using evocative language in painting his picture. Yes, the “all a lot of oysters but no pearls” is a little cloying, but the “smell of hospitals in winter” line has always hit me hard, as well as the winter making you laugh a little slower and talk a little lower.

When it was released, Recovering The Satellites was an emotionally charged album and even with the passage of time, that emotion still resonates loudly. Following their successful run in the 1990s, the band remains together and tours regularly. They’ve released four additional albums since the beginning of the 2000s, one of which was a collection of covers. Like many “alternative” outfits that found success during this time period, they have yet to recapture that success as popular tastes change, but have somehow managed to remain relevant for a specific audience.

In 2016, it’s not “cool” to like the Counting Crows. I’m not sure if it was ever cool. But they’re a band that made three really great albums in a six year span of time—albums that I’ve managed to hang onto into my adult life. It’s not like I sit down and listen to these as much as I did when I was a teenager, or even in my early 20s. But as it approaches its 20th anniversary, Recovering The Satellites proved to be an album worth revisiting. It captures a moment in time—both for the band, who were trying to grow into a louder sound, and for Duritz, who was struggling with his newfound fame. It also captures moments in time for me, when it was a record that I turned to during various points in my life.  Self aware, self effacing, tormented to the point of rolling your eyes, loud, fragile, and at times, even fun, Recovering The Satellites remains a high mark for the band as well as music of this ilk during this era.
Labels: 1996 20th anniversary a long december alternative rock counting crows nostalgia personal essays poorly written thinkpiece recovering the satellites