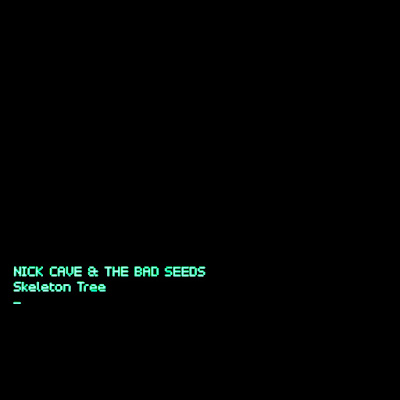 As much as I hate to use the expression ‘headphone record’ to describe something, I’m at a loss for another way to talk about the startlingly intimate new record from Nick Cave.

Restrained and evocative, alarmingly human and incredibly claustrophobic, Skeleton Tree is, for better or for worse, a very public expression of private grief.

Arriving at a very skeletal eight songs, it is said that half of the record was complete prior to the accidental death of Cave’s son in the summer of 2015. The idea of “death” hangs very heavily over a bulk of the record’s material. “You fell from the sky/Crash landed in a field near the river Adur,” he states in his rumbling, haunted baritone voice in the album’s first song “Jesus Alone.” “I knew the world—it would stop spinning now since you’ve been gone,” he continues on “Girl in Amber.” “I used to think that when you died you kind of wandered the world.”

Then, later on the album’s centerpiece, “Magento”: “The urge to kill somebody was basically overwhelming. I had such hard blues—down there in the supermarket queues. And I had a sudden urge to become someone, someone like you—who started out with less than anyone I ever knew.”

Billed to Nick Cave and The Bad Seeds, musically (perhaps on purpose) Skeleton Tree is a very sparse affair. Using the muted, reserved sounds of the band’s previous effort, Push The Sky Away, as a starting point, Cave and the Bad Seeds turn things even more inward, mirroring the very personal subject matter contained in the album’s lyrics.

Skeleton Tree opens and closes with its most straightforward and accessible songs, but this is the kind of album that doesn’t care about ease of access to a listener. You’re either with it from the beginning, or it just isn’t for you. “Jesus Alone,” the album’s startling opening track also served as the de facto single for the album, released a week before the rest of the record was due, which was an interesting turn for the album and its self-contained concept.

Accompanying the release of the record is a documentary film entitled One More Time With Feeling—chronicling the recording and performance of the record. Originally it was planned that no one would hear any music from the record until the saw the film (released on Sept. 8) or bought the album (available the next day.) But that was thrown out the window—both with the preview of a single, as well as with the fact that the album leaked on the Wednesday prior to release.

Based around string flourishes, Cave’s piano tinkling, a feedback loop, and jazzy drumming, “Jesus Alone” is the kind of song that it’s easy to become enveloped in. All at once directionless and yet full of a clear endgame, Cave rattles off stream of consciousness verses with lines like “You’re an African doctor harvesting tear ducts.”   The song serves as a bit of a thesis statement for what’s to come—however, it is a slight bait and switch, sonically speaking.

Moving away from the organic, full-band arrangements on previous Bad Seed albums, like the double LP Abattoir Blues/The Lyre of Orpheus, Skeleton Tree has a very distant, cold feeling to it—earmarked by the usage of chilling synthesizers, dusty and at times glitchy samples, as well as a minimal reliance on traditional “rock band” instrumentation. It takes a few listens to get used to the structure of many of these songs—including the aforementioned “Magneto,” as well as the track that follows it, “Anthrocene.”

Meant to be taken as a whole, the album is paced pretty well, and even in such a short set of tunes, there are ones that are more successfully executed than others. The dirge-like “Distant Sky” is one of its weakest moments, despite its efforts to be profound and moving; and the foreboding darkness of “Anthrocene” weighs it down a little too much.

However, even songs I was a little uncertain about during my first listen, like the synth-heavy double shot of “Rings of Saturn” and “Girl in Amber” grew on me with subsequent times through.

The album concludes with its title track—serving as an epilogue to the seven songs that preceded it. Set to strumming acoustic guitars and piano, it’s the most “Bad Seeds” sounding song among the set. “I called out right across the sea. But the echo comes back in, dear. And nothing is for free,” Cave sings tenderly, in a fragile voice, as if he is attempting to come to terms with the devastation he has faced with in the last year. “And it’s alright now,” he continues, as the song fades into silence.

Skeleton Tree, and its compelling, heartbreaking backstory, makes it an album that seems almost too personal—like it’s the kind of thing I shouldn’t be allowed to listen to. But here it is: Cave’s attempt to deal with his grief. It’s the kind of album that’s not out to win new fans, or reinvent the band’s sound—it may even alienate some of the band’s fans who were hoping for something a little more volatile, or at least a little more structured.

A stark portrait of how one can attempt to make something beautiful and thought provoking out of an unspeakable tragedy, Skeleton Tree is a moving statement—it’s difficult, dense, but worth the effort, making it one of this year’s essential listens and cements Cave’s place as one of the most impressive songwriters of this generation.