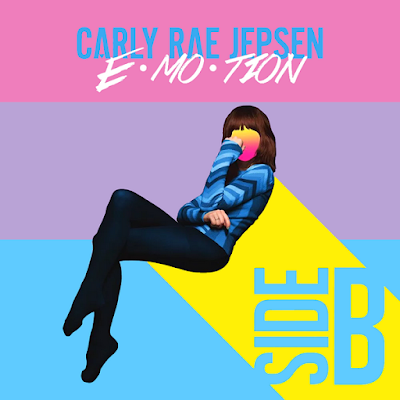 It seems like A LOT longer ago than just a year that Jepsen released E•MO•TION, the album that was supposed to prove to the world that she was more than just a one-hit-wonder. And while it was critically well received, it was not as commercially viable as some were expecting from the gal who was responsible for the massive hit “Call Me Maybe.”

Despite that, Jepsen earned herself pockets of devoted fans (often in the indie crowd) who were drawn to her very affable, listenable blend of 1980s inspired pop music. It also helps that she earned indie cred by working with Dev Hynes, Ariel Rechtshaid and Rostam Batmanglij.

To celebrate the year (man how can it only be just one year) anniversary of the album, Jepsen has recently released E•MO•TION Side B—an EP of eight songs that didn’t make it onto the final album.

Cut from the same cloth, these eight songs are a collection of equally as bombastic, slick, sugary, and synth-drenched pop songs—all relatively solid, the songs are slightly less focused than their counterparts, making it relatively easy to see why these were left off of the album.

Side B opens with a triple-shot of big, bold, energetic pop songs—“First Time” sounds like something that would fit in perfectly on an FM station in the 1980s, and both “Higher” and “The One” aim high in their huge sounding refrains.

But it’s the gigantic “The Fever” that is one of the collection’s most successful songs—lyrically it leaves a little to be desired: “My breath was lost when you said ‘friends.’ Well that could work but I’m still hot for you.” But the song itself is structured so well around a wall of synthesizers, and an insatiable hook that a line like that is easily forgivable. “The Fever” is one of the songs that easily could of have fit in well on E•MO•TION, and is probably one of 2016’s finest pop moments.

Within the effort’s second half, the moody “Cry” is another stand out. Darker sounding than the other seven songs included, it finds a slightly somber Jepsen delivering the verses (and surprisingly the refrain too) in a more restrained vocal range.

I would hesitate to say that Jepsen is the kind of artist that would undertake a “concept album,” but thematically, there are a number of similarities and connections that occur within the songs found on Side B—most often it is of unrequited love; he wants to be just friends, she wants something more. Or, in the case of “Cry,” she wants him to open up, and he’s both emotionally and physically unavailable.

The EP hits a bit of a wall with “Store,” which is its weakest and most perplexing song. In its narrative, Jepsen wakes up in someone’s bed, but it’s not the bed of the one she loves the most. In an effort to peace out without having to have some kind of awkward goodbye, she just tells him she’s “going to the store.” The song itself starts out just fine, and shows a lot of promise, but completely falls apart with the repetitive, irritating refrain.

I apparently liked a song off of E•MO•TION enough to pick it as one of my favorite songs of 2015, and despite how fun that album was as a late-summer listen, it’s not something I have found myself returning to for subsequent listens. Maybe pop music, even with the best intentions, doesn’t have a lot of sticking power in today’s modern music landscape. Side B is not out to redefine Jepsen as an artist, but it serves as an excellent companion piece to what was a relatively good album, and it also serves as a reminder that Jepsen herself is a musical force to be taken seriously.

She took her time constructing a follow up to 2012’s Kiss, and it unfortunately did not pay off in a way that her record label was hoping for. But it shows that she is at least thoughtful about the songwriters and producers she chooses to work with as well as the direction her career is taking.

Side B is out now on CD available from Jepsen's website, as well as a digital download from the regular digital outlets.
Labels: album review b-sides carly rae jepsen new music pop music review