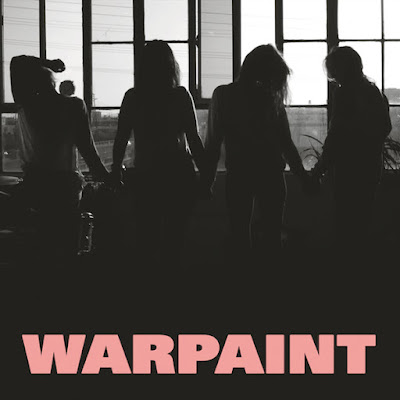 They sure are a band—originally rising out of California indie rock obscurity thanks to their 2010 full length debut, The Fool, which contained what is still one of their best songs, “Undertow.” The album itself was, if I can recall correctly, a fairly seamless blend of psychedelic, hypnotic seduction that teetered into various musical aesthetics throughout its run.

The quartet were sure quiet after the release of The Fool, returning at the beginning of 2014 (a long time by popular music standards) with its self-titled follow up. At the time I reviewed it, I remember referring to it as a “fascinating” listen that showed a band continuing to grow.

But, you know, ask me the last time I listened to it—because that’s a real problem when you write album reviews all the time. Rarely do you find something you want to return to for leisure listening.

Remaining in the collective conscious over the last two years, the girls in Warpaint have returned with their third LP, Heads Up, which finds the outfit trying to bridge the gaps between their influences and sounds—merging their hazy and woozy leanings with dance-driven and slinking rhythms.

A lengthy affair (running nearly an hour) the band frontloads Heads Up with its most accessible material, so that as it nears the end, it feels as if the album has lost its steam before it finds its footing again with the dream-like guitar work on “Above Control.”

The record itself starts with a sparse, simple beat that finds its way into the band’s trademark elements—crisp sounding production, a deep bass groove, intricate, shimmering guitar plucks, and near-ethereal vocals; and, I mean, this all happens like within the first 30 seconds of “Whiteout”—a song that sets the tone for at least the first half of the record as far as the band’s focus on combining atmospherics and non-organic sounds with impressive rhythms and a ‘live’ feeling energy—something they build on with the unnerving noises and slithering, slinking beats of “By Your Side.”

Warpaint reaches its “peak” ambitions on Heads Up early on with the album’s first single (and third track in sequence) the driving, danceable, and overall, pretty fun “New Song.” Yes, sure, the lyrics are slightly insipid (“You’re a new song, baby. You’re a new song to me”) but it’s a track that finds its groove right out of the gate and is unrelenting in its energy and tempo.

“New Song” is an example of how Warpaint’s soundscape has grown exponentially within the last six years. The group piles on the elements—weird voice-based synth sounds, overlapping vocal tracks, and accessory percussion are just some of the layers crammed into a four-minute pop song.

Heads Up’s second half is where things start to veer into a slightly more self-indulgent and less accessible territory with “So Good,” “Don’t Wanna,” and the vocal dissonance of “Don’t Let Go.” This is the point in the record where it begins to test your patience slightly, and the pacing slows down in comparison to the high energy from the previous half.

It’s not that this second of the album is bad, though—it’s still marginally interesting to listen to. It’s just a lot slower and more deliberate in its execution. As Heads Up “heads” into its final moments, Warpaint continues to pull the listener deeper into the heady, swooning depths with the cavernous slow jam “Dre” before picking things up with the shuffling title track, and the glitchy and moody “Above Control,” which my wife said reminded her of The Cure due to its guitar atmospherics.

Heads Up closes with an acoustic epilogue, the fragile and pensive “Today Dear,” which calls to mind the very similar in tone “Baby” from The Fool. It’s a fitting closing track, based on its somber arrangement and delivery, but it also feels a bit out of place tacked on a the end, following all of the songs built around such frenetic energy.

Two and a half years ago, I said it was fascinating to hear Warpaint growing as a band. They are still growing in 2016, and it is still interesting to hear that process. The group has been together for less than a decade, and they’ve had their share of line up changes in the early years, so as the four-piece they are today, it’s a group that works well together but is still figuring out how and where all of the pieces fit together. Heads Up is the sound of those pieces continuing to fall into place. What it lacks in cohesion it makes up for in its sonic palette, energy, and overall ambition.