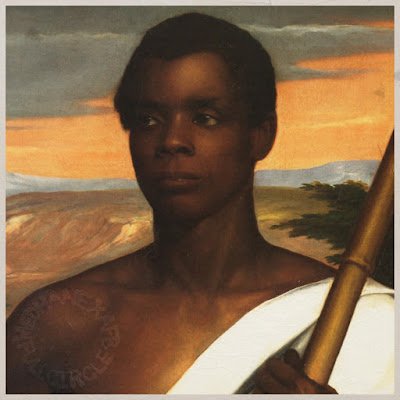 Arriving mere months after his proper full-length debut, Own Pace, spread out across a slender eight tracks, and running 16 minutes in length, one could say that both the Full Circle EP, as well as as the artist responsible for it, Medhane (pronounced Mehdonny, in case you weren’t aware), are unrelenting in their respective nature.

Born Medhane-Alam Olushola, Full Circle, produced entirely by Olushla himself under this AFB moniker, could be looked at as a victory lap for a rapper who is still very much riding the wave of success and opportunities that Own Pace provided—however, it can also be, and more than likely should be, viewed as a stark, blistering, albeit brief, collection of new material from a young, restless voice in music.

Much like the way Own Pace was structured, Full Circle wastes no time (I mean, it really has no time to waste) pulling you right down into its world. From the moment the opening track, “Dan Freeman” begins, and Olushola begins ad-libbing prior to the track’s first verse, musically, a long, dark shadow forms, and rarely, if ever, does any light break through.


The thing that makes Olushola, as well as a number of his peers (Caleb Giles, Pink Siifu, MIKE, King Carter Slums, et. al), such compelling performers is the careful juxtaposition of lyricism and production—and that is what makes Full Circle such an unrelenting listen. For those 16 minutes, it has grabbed a hold of you, and in turn, you don’t want it to let go; you hang on every syllable coming from Olushola’s gruff voice, and you are entranced by the swirling, clattering beats he’s produced.

Swirling is the best word to describe how Full Circle opens—“Dan Freeman,” less than two minutes and a blistering, dizzying way to begin the effort, spirals around you with a series of woozy, reversed, off-kilter sounds, weaving themselves around a skeletal, clanking rhythm. I hesitate to say the song is ‘ominous,’ but it is, most certainly, a stark way to open the EP; and against that clattering, sparse rhythm, Olushola allows the cadence of his voice to skip and skitter along the top of it, just above all it all, with lyrics that walk the line between hip-hop bravado (“Throwing shade, it never reach me—game easy”) as well as the more pensive, introspective lyrics that comprised a bulk of Own Pace—“Dolo early summer days/heavy weight/wonder why December gray/let it rain/accept what you can’t never change every day,” or the statement that opens up the effort’s final track: “Why relish the hurt?”

From a production standpoint, Olushola remains in this metallic and murky territory for a bulk fo Full Circle, only stepping out within the effort’s final two tracks—the jubilant, jittery “Big38,” and then the soulful, and surprisingly smooth “4Evafaded.” And, even though it is an incredibly short, concise effort (the longest track is not even three minutes) with Olushola manning the production under his alias, this through line gives Full Circle a sense of total sonic cohesion.

Own Pace found Olushola very open about trying to work through a long bout with depression and anxiety—the opening track, “Trauma and Grace” should have been a clear sign of that. I hesitate to say that Full Circle is a ‘less personal’ collection of tracks, but lyrically it is much less direct with its approach, with the focus more on stream of consciousness delivery; this, at times, can be a little overwhelming, in the sense that once Olushola opens his mouth, there is often a hungry, breathlessness with which he performs, so you have to really keep up, and pay attention, literally and figuratively hanging on every word, waiting for a clever throw away, or some kind of thought provoking metaphor to rise above the rest—like the “murky water feel like Flint, at the mountain top I took a glimpse…see how the horizon sit,” which arrives in the midst of an unrelenting verse at the top of “I Was Just in The Mara,” one of only two tracks on there project to include a featured performer—Masassai delivers the song’s second verse, while Akai Solo, an incredibly prolific performer, slides in for a guest spot on “Natural Leaf.”

Full Circle isn’t so much a ‘sound collage,’ the way that, say, Earl Sweatshirt’s Some Rap Songs or Pink Siifu’s Ensley are, but with the short running time of these tracks, as well as the lesser emphasis on directly confessional lyrics, it has the feeling that it is a collection of vignettes—each one self-contained and capable of standing on its own, but all eight of them working together to create a larger picture.

The thing about Full Circle is that it seems like it ends as soon as it begins; something 16 minutes in length is never at risk of overstaying its welcome, and as “4Evafaded” comes to an abrupt end, concluding the EP, you’re left with the feeling of wishing there was even just a little bit more to come—and maybe it feels that way because it is such an immersive, unrelenting listen. From the moment it begins, to the moment it ends, you’re really in it, so it’s a little jarring when things come to a somewhat sudden end.

There is maybe an unwritten need to be prolific within the underground rap circles that artists like Olushola, MIKE, Pink Siifu, Ade Hakim, and Navy Blue, among others, run in. It’s easy, in this era, to be a mostly independent artist, self-releasing material on the internet, in places like Bandcamp, or making an album available for streaming only via Soundcloud. It can be a little daunting, at times, to wade into this territory, or feel like you need to keep up with every song, or album, an artist has released.

While it has only been roughly four months in between the release of Own Pace to Full Circle, Olushola did, up until recently, only have two very short EPs to his name—issued in 2017 and 2018 respectively. So this turnaround is surprising and welcome from an artist who is both a gifted, thought provoking lyricist, as well as a compelling voice within the genre. And what it lacks in its clearly confessional and direct lyrics, Full Circle makes up for it with its startling, all encompassing aesthetic, that lingers well after it has finished.