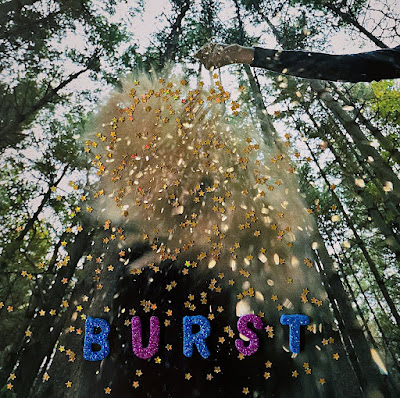 In the press materials for the buzz-worthy, captivating debut full-length from the Columbus, Ohio-based quartet, Snarls, there is mention that MTV apparently described the group as ‘the best of emo and shoegaze.’ I have a lot of questions about that—mostly I didn’t realize MTV, as an entity, even cared about contemporary music (popular or otherwise) at this point, so I’m uncertain why they are attempting to categorize a relatively new, young band; but more curious than that, is the usage of the genre tags ‘emo’ and ‘shoegaze’—neither of which are descriptors I would jump on when speaking about Burst, but if you squint hard enough as you are listening, I suppose you can hear trace elements as the album unfolds.

There’s a lot music out there, new and otherwise, that is waiting to be discovered. And there are times when it might seem overwhelming if you think about everything you may want to give a listen to, or if you think that there’s something out there that is really great you might be missing out on if you aren’t always perpetually checking music news outlets or other corners of the internet for information on the latest, hottest new ‘thing.’

If you aren’t already doing it, following poet, writer, and cultural critic Hanif Abdurraqib on both Instagram and Twitter is a blessing, and if you are on either of those social media outlets, I encourage you to look him up. When he’s not talking about deep dives on Etsy to find bizarre, vintage t-shirts, sneakers, basketball, or his anxiety—he’s rarely, if ever, really led me astray with his musical recommendations, which is how I was introduced to Snarls. Abdurraqib, also from Columbus, referred to Burst as his favorite debut album of the year (so far)—and he’s not wrong.

Across the album’s concise running time and 10 song track list, a very beautiful, visceral catharsis is created, as the band taps into, yes, emo and shoegaze influences, but more than that, jaw dropping harmony vocals, a whip-smart aesthetic that owes more to dream pop jangles and early to mid 1990s ‘alternative rock’ than anything else, as the band casts a long, sometimes very gloomy shadow that throughout, still manages to maintain its pop music sensibilities; even when it is at its most downcast, Burst is, at times, a record that has a sense of humor and knows when, and how, to use it, ever circling a place that is both surprisingly invigorating as well as being downright fun.

Burst is structured to walk the line between slower, more pensive numbers, and songs that are exponentially more energetic—though, really, no less somber in their overall tone. That juxtaposition between a song, musically, that seems like the kind of thing you can nod your head to, or even, if one were so inclined, pump your first to, with the plaintive, pleading, clearly emotion-filled lyrics and delivery of the vocals is, at first, a little startling, and it shows that the band, specifically in the album’s opening track (and early released first single) “Walk in The Woods,” which is, by far, one of the album’s most impressive moments, and an audacious, attention grabbing, confident ways to begin the record.

There are other moments, too, throughout, that are quite audacious, as the band walks that line between creating tension and release—“Twenty,” and “Better Off” are two, right away, that come to mind as other stand out, attention grabbing songs on Burst, each constructed with a palpable amount of explosive drama and desperate longing, both musically and lyrically.

One of the reasons I’d never jump right away to calling Snarls a ‘shoegaze’ band is that even with the distended torrent of guitars that do appear, off and on, throughout Burst, the vocals from singer and guitarist Chol White, and the stunning harmony provided by bassist Riley Hall are not buried deep in the mix like one would anticipate from a band heavily influenced by shoegaze outfits—contemporary, or acts from the past. The vocal tracks are not so much pushed out in front of everything else, but they very, very clear, which works well for when Hall and White blend their voice together on the refrain of “Hair,” as well as during the enormous sounding refrain on “Walk in The Woods.”

Lyrically, I can tell why a band like Snarls, and an album like Burst, could be called ‘emo.’ It’s not ‘emo’ in the sense that we think of it now—like Dashboard Confessional, or any band you’d see promoted at Hot Topic in the early to mid 2000s; Snarls are emo in the sense that they are emotional—yes, these are, at times, infectiously written ‘alternative’ rock, guitar driven songs, but at their core, the lyrics are often quite emotional, or, at least, they come from an emotional place, even of those emotions aren’t incredibly complicated. It is, of course, the way the band sells those emotions—often it is when both Hall and White let their vocals collide, like on the ridiculously powerful refrain of “Walk in The Woods”—“I can’t quit you baby, no matter how hard I try. You’ve got me in a knot, but it’s my fault it’s tied.” Then, not only do they let their vocal collide, but absolutely soar above everything else with the last few lines: “I’m waiting on you to make it worth the while—that I’m stuck here. I’m so stuck here.”

The two manage a similar tactic on the pensive, regretful “Twenty.” Presumably the members of Snarls are relatively young, so for a group so young, it’s a very, very stark song: “I’m not who I thought I was gonna be,” White sings, lowly, in the song’s first verse. “Twenty seems further than it ought to be.” It’s the song’s refrain that really lingers, though, well after the song has concluded: “Forgive me for waiting to give up until now. I know it’s late in the game, but I still got you.”

Burst concludes with two of its most swooning, grand moments—both of which manage to almost capture and condense everything great about this record, and this band, into eight minutes. “Falling” finds the band leaning heavily into a dream pop, gauzy aesthetic, blending multiple, shimmering layers of cascading guitars, wish hushed, restrained vocals; and the album’s titular track also serve as its closing track, which is structured around a heavy torrent of guitars, a thick, unrelenting bass groove, and lyrics that maybe among the darkest, or at least most reflective on the record: “When I die, may I burst with a crack of thunder and a lot of glitter? White and Hall sing, splitting their voices across these words. “When I die, may I say I lived the vest life? And I might cry, when you say goodbye.”

The rest of “Burst” is built around the repetition of one, borderline haunting question—“Will you say goodbye?”

For as dark, or at least emotionally driven as Burst can be at times, it is still a record that is powered by a youthful musical exuberance—one that isn’t afraid to wear its influences on its sleeves, and is never at risk of coming off derivative of those acts, or those genres, but both pays tribute as well as pushes this sound forward. Burst may really be one of the best debut full-length you’ll hear in 2020, but more importantly than that, it is a window into the preternatural talent of a relatively young band that is spilling over with promise and potential.