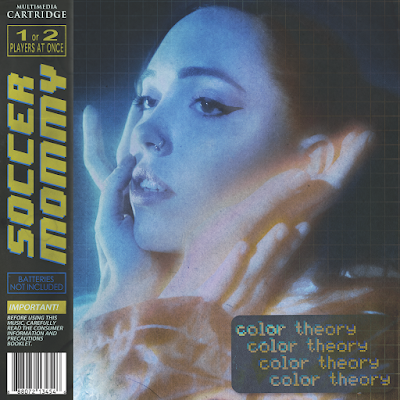 The modern day album roll out is a strange thing. It either happens in a slightly more traditional sense—a single paired with the new album announcement, and a release date on the near horizon; or it happens as a surprise, with the album arriving mere days after it is initially revealed.

Or, there is a long, slow roll out, lasting for months, with little, if any, explanation as to what the end game is until a formal/traditional announcement is made.

The latter is how the latest effort from Sophie Allison’s Soccer Mommy project was unveiled, which is, truthfully, what kept me away from it, at least partially, until the album title and release date were shared.

Color Theory’s slow unveiling began in September, with the release of “Lucy,” the album’s first single. Dubbed an ‘unnerving look at the face of evil’ in the Pitchfork write up, and accompanied by a lyric video with what could only be described as a Maxtrix-esque aesthetic, I was uncertain what to make of it, and I erroneously stayed away.

I also stayed away from the follow up single, released two months later—the sprawling, seven minute opus, “Yellow is The Color of Her Eyes.”

However, I began giving Color Theory my complete attention once the album, Allison’s third full-length as Soccer Mommy, was officially announced, alongside the third single, “Circle The Drain,” an infectiously structured harrowing look at depression, and by far, one of the best songs of 2020.

Spread across 10 songs, Color Theory stops short of being a traditional ‘concept album,’ but it is a tightly knit cycle of closely connected songs—written while Allison was touring continually in support of her breakthrough Clean, the album, according to its press materials, ‘confronts the ongoing mental health and family trials’ of Allison’s life, as well as explores, through the use of color, three central themes: sadness and depression (blue), physical and emotional illness (yellow), and finally, darkness, emptiness, and loss (gray.) The result takes Soccer Mommy, as a project, to new sonic heights—there is a depth and complexity found in the instrumentation and arranging that shows an enormous amount of growth coming from Allison as a songwriter and performer.

Clean arrived less than two years ago, and it was released shortly before the debut full length from Lindsay Jordon’s Snail Mail, Lush, a peer, of sorts, to Allison—both incredibly young and preternaturally talented, both records more than tipped a hat to guitar-heavy alternative rock that came over 20 years prior. Color Theory is still a guitar heavy record, but there is, by comparison, a lot more happening this time around, with Allison and her band incorporating myriad atmospheric, dreamy tones throughout, as well as stripping things back and using the acoustic guitar to lead a song, dusty sounding drum machines, and finally, the surprising (and surprisingly impactful) inclusion of a string arrangement on the album’s stark, self-effacing “Royal Screw Up.”

One of the most admirable things, and impressive things, about the songwriting on Color Theory is Allison’s ability to dress up her lyrics inside infectious, unassuming melodies. It’s most apparent on “Circle The Drain,” which features an enormous (though reserved in its execution) sing-a-long refrain: “Things feel that low sometimes even when everything is fine,” she begins in the ‘pre-chorus’ that leads into what could more or less be looked at as the album’s mission statement: “Hey, I’ve been falling apart these days. Split open, watching my heart go round and around…circle the drain—I’m going down.” And the disguise lyrics like that wears is so sneaky, it takes a few listens for the seriousness of the song (and therefore the rest of the album) to sink in.

She does this, too, right out of the gate on the album’s straightforward (musically speaking at least) opening track, “Bloodstream,” a song that leans heavily into that guitar-driven, indie, ‘alternative’ rock sound that ran throughout her previous effort, but just below the surface of those chugging riffs and bursts of noisy feedback are some very real lyrics about the dangers of nostalgia—“Remembering running through my yard like a wild stream. Just a little kid—blood flowing into my rosy cheeks. Now a river runs red from my knuckles into the sink, and there’s a pale girl staring through the mirror at me.”

Lyrically, Allison walks a fine line on Color Theory—the songs about her mother’s terminal illness, or at least songs that have lines that reference it—are impossible to miss, as are songs that relate to mental health and the odd feeling that comes from coming out of adolescence and entering adulthood (she will be 23 in a few months.) So it walks a very fine line between being incredibly direct, but also being very vague and shadowy, which is what begins to happen midway through the album’s first side after the acoustic, gorgeous, and haunting “Royal Screw Up.” In a song by song breakdown with Pitchfork, she said she wrote it in less than a half hour, but it’s the kind of thing that lingers long after it is over, thanks to the jaw dropping arrival of the strings (it is seriously a moment that took the wind out of me the first time I heard it) as well as lyrics like: “And I want an answer to all my problems. But there’s not an answer. I am the problem for me.”

The album’s first side ends with “Crawling in My Skin,” another straight forward, indie rock stomp from a musical perspective, though both it, and the song that arrives before it, “Night Swimming” find Allison’s lyrics turning toward the more fragmented and ambiguous with their use of imagery. The same can be said for “Night Swimming,” though it is a surprise musically—featuring no percussion whatsoever, it relies on tightly plucked acoustic guitars and heavy, heavy atmospherics courtesy of the EPS 16 synthesizer (used throughout the record) as well as processed, effected, dreamy guitar work, making it the most ethereal song on the record.

I hesitate to say that the album’s momentum shifts, of changes, after the halfway point, but the pacing and energy level is noticeably different on Color Theory’s second side, specifically as it reaches its conclusion. It is in the album’s second half that you find both of the singles released well in advance of the album—“Yellow is The Color of Her Eyes” opens things up, and “Lucy,” is tucked in the middle of this second half.

Again, as she did in the album’s first half with dressing up the personal struggles written into “Circle The Drain,” Allison does the same on “Up The Walls”—a quickly paced acoustic shuffle, with additional layers of atmospheric guitar effects woven into the song’s fabric, lyrically it about the difficulties that come from having mental health issues, having a supportive partner, but knowing that their patience can only go so far and that you might no longer be capable of being the person they once loved: “I hate to be this person who’s climbing up the walls,” Allison sing’s in the song’s opening line. “I’m scared the girl you love is hardly ever here at all…Oh love, was I everything, everything you wanted back then?” All before ending the song with that same question, just rephrased—“Am I everything, everything you want still?”


The album ends with an arresting and personal double shot with the sparse, dissonant, and tense “Stain,” and the glitchy, slithering, slow motion “Gray Light” The former features instrumentation from Allison alone, strumming hard on an electric guitar, with some additional keyboard tones adding depth to the arrangement, while she double tracks her vocals, plaintively and pleadingly delivering lines like, “Yeah, I’m always stained and it’s never coming out. Yeah, I’m always stained—it’s a match that’s been burned down.”

The latter makes one more usage of Allison’a ability to mask the darkness of her lyrics by juxtaposing it against unlikely instrumentation. “Gray Light” is a long, hard confrontation on mortality, both her own and that of her mother—the attraction and fear that death has. The song, structurally, teeters back and forth on a ramshackle drum machine pattern that skitters underneath pensive guitar strumming, but as it heads into its final moments, switches tones and becomes heavily distorted and somewhat disorienting, with the final words uttered being things that will haunt well after the song, and the album, have stopped: “I can’t lose it—the feeling I’m going down. I can’t help it—I’m watching my mother drown.”

There’s some humor that is lost, I think, in reading through the aforementioned song by song breakdown between Sophie Allison and Pitchfork writer Quinn Moreland; the interview ends, as Allison explains why she chose “Gray Light” to be the album’s final song, with her saying, “It’s a bright, happy record.”

Right before that, though, she says she picked it as the last song because it ‘feels like death.’ “You and everything in your world are drowning in a complete loss of hope. I wanted the album to have this incline in energy and then drop into full emptiness,” she says, adding the song specifically captured a lot of themes from the record, but also gets into what the final ‘part’ is about—fear, death, loss, and emptiness.

I think it goes without saying that Color Theory is both an ambitious step forward for Soccer Mommy as a project, but it’s also a very, very bleak record, though not totally void of hope, or optimism, even if it is partially false. Yes, the lyrics are dark and honest (Allison herself has misgivings about how honest she can be in her lyrics at times) but musically, it’s intelligent enough to try and lighten the mood or at least distract temporarily. Even a song like “Lucy,” with the repeated refrain of “Quit taunting me” is the kind of thing you don’t react to right away, and is wild infectious in the way it is presented.

As one might anticipate, there is little, if any, resolve to be found by the time Color Theory ends, and I think that’s the point; or, at least, one of the points it’s trying to make. There are no easy answers to be found when it comes to the thematic elements of the record, and as the drum machine and keyboards begin to break apart and vanish at the end of “Gray Light,” you have to bet kay with there not being any answers, easy or otherwise, but try to take some small amount of comfort in knowing that you are not totally alone.

Knowing that there is this record—brilliant, deeply personal, and visceral.