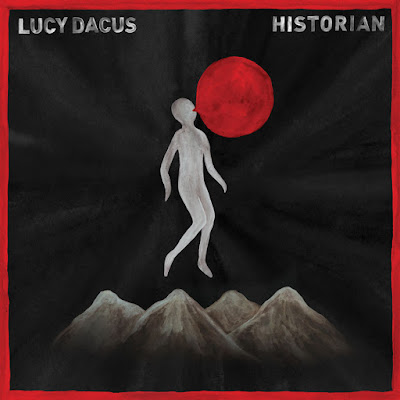 There are two things that happen within “Night Shift,” the first song on Lucy Dacus’ sophomore album Historian, that made me stop what I was doing and take notice.

The first occurs just slightly over a minute in—Dacus begins to raise her voice just slightly, and delivers the straight faced lyric, “Am I a masochist—resisting urges to punch you in the teeth, call you a bitch, and leave?” Hearing that, so early in the song, sung over a clean sounding, strummed electric guitar, made me wonder what I would be in store for with the rest of this song, let alone, the rest of the album.

The second moment arrives at roughly the halfway point in the song—at six and a half minutes long, “Night Shift” is already an audacious way to open the album. A little over three minutes, Dacus and her band round a corner, and the song shifts gears completely. It’s still the same song, and the same track, but it’s so drastically different, that during my initial listen, I had to do a double take to confirm I hadn’t moved on to song number two.

It’s in this second half where Dacus works in the titular phrase of the song, turning it into an embittered mantra—“You’ve got a 9 to 5, so I’ll take the night shift. And I’ll never see you again if I can help it,” that she winds up howling over a cacophony of fuzzed out guitar, riding it out until the end.

Things have moved very quickly for Dacus and her band. She unassumingly released the clever single “I Don’t Want to Be Funny Anymore” at the end of 2015 via Egghunt Records, and issued her debut, No Burden, in early 2016. During that time, she was flooded with a number of offers, and wound up inking a deal with Matador, who reissued No Burden to a wider audience.

Recently, there has been a huge boom in women, barely in their 20s, who are keeping guitar-driven (and often sad) music alive and well—Phoebe Bridgers, Soccer Mommy, and Dacus’ Matador label mate (and good friend) Julien Baker are included among those; the arrival of Historian really couldn’t have come at a better time.

Dacus is more than just another young sad girl with a guitar, though. Throughout Historian, she sings with a smoky, impressive, and otherworldly howl, and her band sounds incredibly tight throughout the album’s ten songs. Working with Matador allowed a larger budget for Dacus, though this isn’t some kind of slick sounding pop record. It doesn’t ‘clean up’ the ramshackle, scrappy sound she established on No Burden; it just tightens things up, and gives her a little more room to explore her dynamics, like adding lush string arrangements on songs like “Nonbeliever,” and on the somber titular closing track; or a horn section on “Addictions,” and the late arriving “Pillar of Truth.”

Throughout, Historian is an album full of surprising bombast, emotional highs, and evocative lyrics, creating the kind of listening experience that it’s all too easy to get lost in. Dacus uses vivid imagery like “Freeze frame, tidal wave in the passenger side,” she begins on “Addictions. “I’m still a nervous kid after all this time. Can you imagine what it’s like to be here with you now?” and “Reading in the phone booth, sucking on a ginger root. I never got to talk to you—why is this the image I come back to?” on “Next of Kin.”

However, Historian isn’t all just images of broken hearts or difficult love; “Yours and Mine” deals with the rioting over racial injustices in Baltimore, “Nonbeliever,” one of the album’s best tracks, mirrors Dacus’ own struggle to distance herself from a religious upbringing, and the devastating and explosive “Pillar of Truth” confronts the mortality of her grandmother.

From a production stand point, Historian re-teams Dacus with No Burden producer Colin Pastore, and here, he does an excellent job of making use of the Matador budget, but staying true to Dacus’ ‘indie rock’ aesthetic—finding the balance between jangly and rough, and overproduced. It’s a warm, crisp sounding record—one you can tell that the overall sound of was labored over to get it just right.

Despite being a most excellent record that works both from start to finish, as well as having tracks that really stand out, one minor flaw that weighs Historian down ever so slightly is that across the album’s ten songs, Dacus and her band rarely leave their comfort zone. Yes, the flourishes of strings and horns are a nice additional layer, but things can, at times, start to sound a little samey, and the pacing of the record slows in a few areas after the halfway point.

Sidestepping the blunt force sadness of her peers, Historian is a surprisingly exhilarating listen. It isn’t without its darkness, but the tight musicianship and song arranging, paired with Dacus’ unique vocal range and impressive lyrics make her an important artist to watch in 2018, and Historian an important album to hear.