Album Review: Christoph De Babalon - If You're Into It, I'm Out Of It (20th anniversary vinyl reissue) 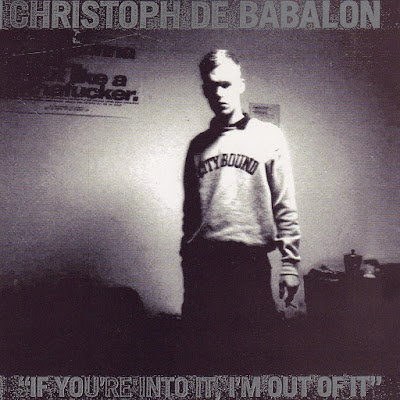 Over time, I’ve learned to take nearly every positive Pitchfork review I come across with a grain of salt. I can’t force myself to like something, even if it has been dubbed ‘Best New Music’ and was bestowed with a rating above an 8.0.

But every once in a while, all that praise will point me in the direction of something I otherwise would have slept on.

I think it speaks volumes of my current level of interest in new music and contemporary popular music in general that one of the records I’ve enjoyed the most and spent the most time listening to in the first few weeks of 2018 is from 1997.

They had me with that murky cover art and the moderately confrontational album title, but the 8.4 rating and tagging it as a ‘Best NewReissue,’ along side the co-sign from Thom Yorke sold me on the blistering, claustrophobic, and cacophonic If You’re Into It, I’m Out of It from Christoph De Babalon. Originally issued in 1997 via the fledgling ‘breakcore’ label Digital Hardcore Recordings, the album has been remastered and reissued on vinyl for the first time in two decades.

A lot of things from 20 years ago haven’t aged well, and I stop short of saying that If You’re Into It is a timeless record, however, I will say that listening to it now is like hearing a head-on collision between the future and the past. It’s a bleak record—I mean, describing it as ‘dark’ doesn’t even really do it justice. It’s a rollicking, cavernous, unnerving journey that is nearly all tension, and little, if any release.

Released at a time when compact discs were the most popular form of physical media, If You’re Into It is a sprawling effort, clocking in at 77 minutes; spread across 11 tracks, the album is bookended with its lengthiest works—closing with the one-two punch of the 11 minute, dread-filled “High Life (Theme),” and the frenetic, bombastic “My Confession.” The album itself opens with one of its most captivating moments—the 15-minute dirge “Opium.” 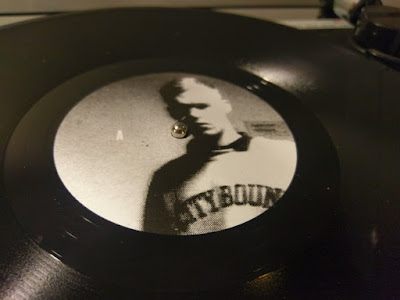 A slow, codeine crawl doesn’t even begin to describe how stretched and haunted the droning in “Opium” sounds as De Babalon alternates tones, building a horrific sense of palpable anxiety—it’s simply something that has to be heard to be believed. On top of that, he begins to fold in a number of terrifying and atmospheric samples that echo throughout the track’s latter half—otherworldly screeches, muffled and layered voices, and reversed tones from bells all haunt as the piece comes to a conclusion.

If you made it through that, congrats—it’s not so much a bait and switch, but only, like, half of the record is like that. The other half is incredibly influenced by the time it was created.

In 1997, electronic music was having as big of a moment as it was ever going to have. MTV ran a late night video block, “Amp,” dedicated to electronic artists on the rise; acts like The Chemical Brothers and Prodigy went from being esoteric cult acts to world domination—heights neither would see again; and sub-genres like drum and bass and jungle began to form within pockets of the electronic community.

Perhaps influenced by the aggressive and antagonistic sounds of Digital Hardcore and its flagship artist Atari Teenage Riot; perhaps influenced by the sound of time times—either way, many of the tracks on If You’re Into It are frenetically and breathlessly powered by breakneck speed and distorted percussive rhythms—often becoming dizzying and kaleidoscopic in their nature, there are moments when listening to the album that all you want to do is jump around wildly to the music, take a bunch of drugs, or simply just fuck some shit up.

Or all of the above.

De Babalon strikes an impressive balance between the moody, unsettling droning and the tracks structured around the skittering beats—while “Opium” wisely takes up the entire A side of this 2xLP reissue1, the B side kicks into overdrive with a nearly flawless, cacophonic, and vigorous run of tracks—“Nostep” thrives with synthesizer beeps and boops and a familiar jungle/drum and bass sampled beat; “Expressure” is unrelenting in its pacing as drum samples and wonky keyboard sequences pummel you.

One of the things that became apparent during my initial listen of If You’re Into It is just how influential of a record this thing really is—on a song like “What You Call A Life,” (one of the best on the record), De Babalon manages to successfully merge both the unsettling, droning atmospherics with the jungle beats, arriving at a proto-Burial sound.

And with the aforementioned co-sign from Thom Yorke, who called it the ‘most menacing record’ he owned, If You’re Into It was released a few months after OK Computer, and throughout, it is obvious the effect it had on the sounds Yorke explored with Radiohead later on Amnesiac, as well as on his two solo efforts.

“Brilliance” begins the album’s C side, and it’s ominous, dated sounding synth tones, and overlapping, skipping voice samples are reminiscent of what Daniel Lopatin, aka Oneohtrix Point Never, would later explore in 2011 on the experimental Replica. And while the rest of this side leans very heavily into the more chaotic sounds, De Babalon closes the album up with a sharp juxtaposition of both aesthetic he’s tried to represent throughout If You’re Into It. “High Life (Theme)” shudders and haunts, possibly striking a more terrifying tone than “Opium,” and the low rumble, quickly paced drum and bass percussion and clanging bells of “My Confession” bring the record to a collapsing, sinister conclusion. 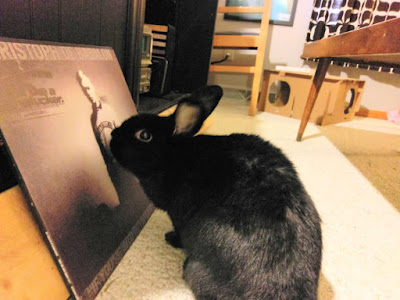 There are records that, throughout my life, I bought them for one reason or another, and at that time, I was just ‘not ready’ for them. Tricky’s incredibly dark Pre-Millennium Tension is one that comes to mind right away. I bought it in 1997, when I was 14 years old, and it took me until I was in my late 20s to really get it. I hesitate to think how I would have responded to hearing a record like this upon its release, so I am pleased that it’s something I discovered now, via this reissue, at a time when I am more open to something of this nature.

I hesitate to say that If You’re Into It, I’m Out Of It is a ‘statement of beauty,’ simply because it’s so unsettling and at times ugly. I guess you could say it is an album that has surprising moments of untraditional beauty, musically speaking. I would go so far as to say that, as an artist, it’s De Babalon’s defining statement because it captures a moment in time—this perfect instant where the sound he had been working toward reached an impressive, thought-provoking, and cohesive apex.

1- I realized I wrote 1,000+ words about this album without discussing the quality of this remaster, which is, apparently, something I do a lot with these reviews. Anyway, considering I have never listened to the original LP or even CD of this album, I can’t speak to what the remaster may add to the sonic depths of If You’re Into It; however, the new vinyl pressing sounds immaculate, walking a tightrope between clarity and richness, while staying try to the grimey, lo-fi aesthetics of the album’s atmosphere.

If You're Into It, I'm Out Of It is out now via De Babalon's own Crossfader Entertainment. You can order copies (complete w/ complimentary download) from Boomkat.
Labels: 1997 20th anniversary album review Christoph De Babalon digital hardcore drum and bass electronic If You're Into It Then I'm Out Of It jungle new review vinyl reissue