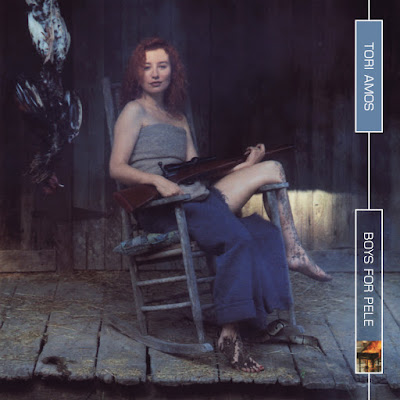 Please note, a heavily edited and condensed version of this piece will be appearing on the website Spectrum Culture in the near future.

It begins, and ends, in a near whisper.

Released in 1996, Tori Amos’ third album, Boys For Pele, was a commercial gamble. 18 tracks, clocking in at 70 minutes, the word “dense” doesn’t even begin to describe this thing. A concept album about the problems with and various facets of masculinity, religion and spirituality, and making sacrifices to the volcano goddess Pele—amongst other topics (Courtney Love, Amos’ ex-partner, et. al)—Boys For Pele is a difficult, demanding listen; however, it is a surprisingly rewarding one as well.

One of her most successful, despite the risk, it contains one of her best known singles (“Caught a Lite Sneeze”) as well as one of her most devastating songs (“Hey Jupiter.”) Intensely personal while still hiding behind layers of mystique and evocative, fragmented lyrics, Boys For Pele is fragile and gorgeous, all while being volatile, dissonant, and cacophonic.

I was in 7th grade when Boys For Pele was released in January 1996. Coming of age in the 1990s, I was well aware of Tori Amos—both “God” and “Cornflake Girl” were staples of MTV at the time, and I can recall seeing advertisements with the startling cover art for Pele in various publications at the time. However, I didn’t get into Tori Amos—and specifically Boys For Pele—until my second year of college.

On a whim, I bought her 2002 effort, Scarlet’s Walk, a concept album about traveling America in a post-9/11 world. My friend Liz was (and probably still is to some extent) a gigantic Tori Amos fan, and so shortly after I let Scarlet’s Walk sink in, I dove into Amos’ canon, burning copies of almost her entire discography. Boys For Pele and From The Choir Girl Hotel stuck with me the most at the time; and now, so many years later, Boys For Pele still sticks with me. There are things that occur on the album that you are unable to shake.

At times, Amos barely rises above a whisper—see the introductory track, “Beauty Queen,” which quietly slides into the sweeping grandeur of “Horses.” There are many moments like that, of just Amos and the piano, and then there are moments when she layers the bombast—one of the most notable things about Boys For Pele is the incorporation of the harpsichord—an ornate, slightly charming, slightly dissonant instrument that she then pairs with more aggressive lyrics—barking “You think I’m a queer—I think you’re a queer,” on the album’s breathless second proper track, “Blood Roses”; then, shortly after that, “Professional Widow” arrives—the song that may or may not be about Courtney Love, featuring a slow motion, industrial sounding dirge backing her harpsichord playing, while Amos herself utters the expression “Starfucker” over and over throughout, ending it with the unsettling yelp, “Give me peace, love, and a hard cock.”

But not everything is this confrontational. There are moments of whimsy as well, like the short “Mr. Zebra,” the blink and you miss it Eagles lyric that begins “In The Springtime of His Voodoo,” and even the jaunty twinkling of “Father Lucifer,” a song inspired by Amos’ experimentation with psychedelic drugs with a South American shaman, where she allegedly met the devil.

A bulk of Pele is Amos at her finest—balancing the dramatic, grand, sweeping piano-driven songs like the string laden “Marianne,” the slow motion, haunting “Not The Red Barron,” and the cathartic release of “Putting The Damage On,” with the slinking, and sultry—“Doughnut Song” and “Little Amsterdam.”

The album’s high point arrives halfway in, in the form of “Hey Jupiter,” a song that haunts me still, 14 years after I first heard it. Apparently written after Amos was visited by the ghost of John Lennon in a hotel room in Arizona, this is yet another song that begins as a whisper before growing into something else entirely; and it was only recently that I realized the wordless, otherworldly howling Amos lets loose with during the song’s refrain is very, very similar to the same wordless, otherworldly howling that concludes Prince’s “Purple Rain.”

To commemorate the album’s 20th anniversary, and to stress its impact and importance for Amos herself as an artist (she self-produced for the first time on Pele), as well as its place among her canon with her fan base, the album was recently reissued and remastered, complete with an additional disc of supplemental material including b-sides from the era, remixes, and live performances.

For the hardcore Tori Amos fan (as many of them are), they probably already have around 11 of these songs—those are the tracks found on the “Caught a Lite Sneeze” and “Talula” singles. Many of them are cut from a similar cloth as the songs that made it onto the album: “That’s What I Like Mick” and “Toodles Mr. Jim” find Amos in a very whimsical mood; “Alamo,” Graveyard,” and “Frog on My Toe” find her sparsely accompanied and dramatic in tone; and “Sucker” finds her returning to the dissonance and confrontational tone of “Professional Widow.”

Also included in the ephemera is the “Dakota Version” of “Hey Jupiter,” which changes the structure of the song drastically, making it less impactful for me, but, according to Wikipedia, emphasizes the similarities between it, “Purple Rain.”

One of the big selling points to picking up the reissue of Boys For Pele is the inclusion of the unreleased track “To the Fair Motormaids of Japan,” which was recorded during the album’s sessions but has not seen the light of day until now, despite some kind of fan mythology surrounding it. The song would have fit in well within the context of the album—another sparsely arranged piece, it finds Amos balancing the give and take between her fragile whisper, and her visceral, cathartic howl.

In revising Boys For Pele now, one of the things that struck me about it is just how timeless and relevant the ideas found within it are. “Boys on my left side, boys on my right side, boys in the middle—and you’re not here,” she sings on “Caught a Lite Sneeze,” before following it up with, “I need a big loan from the girl zone.” And on the unearthed demo “Fire Eater’s Wife/Beauty Queen,” Amos asks, “What would this world be like without nasty girls?”

On the heels of recent aspects regarding the 2016 Presidential election—Clinton herself running for President, Trump’s aside of calling her a “nasty woman,” the concept of “grabbing a woman by the pussy,” and the threat of reproductive rights being at risk by the government, the exploration of femininity and feminism on Boys For Pele was an early rallying cry for women, and twenty years later, we are still sadly behind the times.

The idea of a concept album can be daunting to a listener, and Amos’ discography is filled with them. Boys For Pele is an odd listen that is both incredibly inviting and warm at times, while still keeping you at an arm’s length with its unnerving tension. For the longtime Amos fan—you already know how good this album is. For the casual fan, or those who are just discovering this album because of this reissue, Boys For Pele is an excellent place to start the journey through her canon.

The deluxe reissues of Boys For Pele, both the 2xLP and the 2xCD, are available now via Atlantic/Rhino.