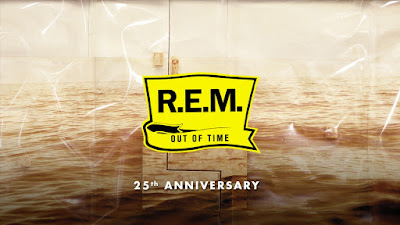 Growing up in what is commonly referred to as the “MTV Generation,” I don’t remember an age when I wasn’t aware of REM. As a kid, I distinctly recall the videos for “The One I Love” and “It’s The End of The World as We Know It.”

I also remember the video for “Losing My Religion.”

Directed by Tarsem Singh, the angelic and pseudo-religious imagery weirded me out at such a young age—in 1991, I was eight years old. But now 25 years have passed; I am 33, and REM’s commercial breakthrough, Out of Time, is celebrating a milestone anniversary. To commemorate, the group has reissued the album in a number of formats—including its first vinyl pressing since 1991, a two CD set complete with demo recordings1, and a three CD set that tacks on a live session.

I don’t not like REM, but I would consider myself a fair-weather fan at best. We have a small selection of their records that I listen to occasionally, and outside of the rather strong affinity I have for their song “Strange Currencies,” I’d say that’s about it. When I was a kid, my parents got a copy of Out of Time from the BMG record club, then later, in a post-“Everybody Hurts” world, a copy of Automatic for The People—so revisiting Out of Time now is a slight trip back in time for me. I don’t have memories of the album’s “deep cuts,” but I remember the song’s jaunty opening, “Radio Song,” very well because as a kid, KRS-One yelling “The DJ sucks!” really sticks with you.

I, also, unfortunately remember the ubiquitous “Shiny Happy People,” which, according to Wikipedia, the band themselves hate. I would say that this is probably one of the worst REM songs—way worse than “Stand,” which is also pretty bad. I mean, they’re kind of similar in their lyrical insipidness and musical stupidity, but come on. “Shiny Happy People” is garbage.

Out of Time was the band’s second album for Warner Brothers. I stop short of saying it was a dramatic departure from the “college rock” sound REM was known for up until this point, but it’s an album that finds them maturing, and incorporating a number of new elements they had previously only toyed with on Green—their major label debut, including additional instrumentation and string arrangements, as well as a commendable level of risk and experimentation, best exemplified on the spoken word track on the album’s second half, “Belong.”

But through that maturation, listening to Out of Time now (both as an adult and 25 years removed), it seems to lack not so much focus, but cohesion. Sonically, and stylistically, it’s an album that’s all over the place, and that makes it hard to concentrate on while listening. For the time, it was probably big, bold, and ambitious, and keeping it within that context, it’s impressive. But there’s also nothing that holds it together. It opens with something borderline funky and somewhat whimsical prior to turning it all inward with something incredibly pensive and nervy, before turning it all in even further with something that brings the pacing of the album to a screeching halt.

It’s the arrival of “Near Wild Heaven” that brings the band back to the sound listeners were familiar with at the time; a sound they really only dip back into within the final selections of the album—the rollicking “Texarkana,” and the album’s surprisingly triumphant closing track, “Me in Honey.”

It can be looked at as a transitional record. By 1990, the band was growing out of the “jangle pop” sound they had built their name since the early 1980s. Out of Time lacks the downcast, contemplative acoustic leanings of its follow up, Automatic for The People, as well as the conceit of a “big dumb rock record,” that the band would play with in 1994 on Monster.

While it is a complete reflection of the time, and it hasn’t aged terribly, there are also themes and ideas present that are still very relevant 25 years later. “The world is collapsing around our ears,” Michael Stipe sings as the album’s opening line on “Radio Song,” a lyric that is rather unsettling given the result of the recent Presidential election.

Then, of course, there’s the dramatic “Losing My Religion,” a song that, as an adult, I have come to have more appreciation and respect for—as I have with many songs I slept on from the 1990s. Apparently a Southern phrase for losing your civility or composure, the song itself, aside from its dated production values, still holds up incredibly well—Peter Buck’s mandolin riff absolutely slays, and Stipe’s pleading, confessional, mysterious lyrics still haunt. It’s also an incredibly smart song—tackling rather serious and dark fragmented lyrics without alienating the listener by dressing the entire thing up in the guise of a pop song. Sure, it’s a bit of a downer as far as pop songs go, but REM knew what they were doing by making this song so catchy.

I don’t want to say that Out of Time is a bad album. It sold 18 million copies worldwide, and spawned the band’s biggest (and unlikeliest) hit song, so if I were to say it was “bad,” I’d be in the minority. I think it goes without saying that it is maybe the most important entry in their mid-period canon—shifting away from one thing while trying to grasp for another. Through this anniversary reissue, it is an album that is worth revisiting, but because of its jumbled structure, and even if it has a certain rough around the edges charm to it, it lacks the total clarity of Green and Automatic for The People.

1- It seems worth noting that I got all the way through writing this review and found no great way to include any information about these demo recordings. For a fair weather fan like myself, they do nothing to either add or subtract from the listening experience. Some of them are instrumentals, so if you are into REM karaoke, they are probably right up your alley. Other than that, it is just an opportunity to hear these songs in very early, skeletal stages—something designed for a true, hardcore REM fan.