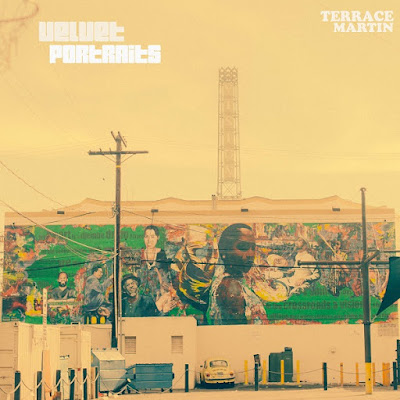 By all accounts, I should be someone who likes Kendrick Lamar. But despite my best efforts—and believe me, I have tried on more than one occasion—I just can’t bring myself to see what all the fuss is about.

However, one thing that Lamar has done is brought a number of jazz, funk, and R&B arrangers and musicians to the forefront of popular music—which, after giving in to the Kamasi Washington triple album at the end of last year, I’ve realized this is a very good thing as far as being introduced to performers you may otherwise not have heard of.

Such is the case of Terrace Martin, a multi-instrumentalist and producer who just released his second album, Velvet Portraits, a relatively solid and enjoyable set that seamlessly and nearly effortlessly blends hip-hop, jazz, funk, and modern R&B into something that isn’t so much new, or unique—but is still admirable, familiar, and extremely listenable nevertheless.

Velvet Portraits works the best, and finds the most success on its instrumental tracks, including the smoothed out, sun soaked funk of “Valdez off Crenshaw,” the skittering percussion and slow motion grooves of “Curly Martin,” and the hip-hop infused beats on the swirling “Tribe Called West.”

That is not to say that the pieces that feature vocals are unsuccessful by any means, but there is an odd generic, and slightly less captivating and interesting feeling to those tracks (like the ready for public radio sounds of “Push” and “Patiently Waiting”) when compared to the atmosphere created by the instrumental, more jazz based songs on the record.

But there are exceptions to even that: there’s the codeine drip of  “Never Enough,” and the impressive G-Funk blasts of “Turkey Taco.”

Despite the back and forth nature of a release like this, where the track list alternates between instrumental breaks and vocal based tracks, taken as a whole, Velvet Portraits is a surprisingly fun and accessible listen. For those who are just starting to dabble into more jazz, funk, or R&B based music, it doesn’t really serve as an introduction to the genres because of how modern it all sounds, but it does help with the process of opening more doors to like minded artists, both from the past and from the present.