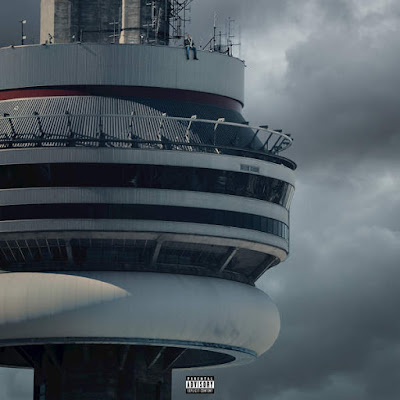 I haven’t been very kind to the rapper named Drake, have I?

I gave a rather tepid review to his 2013 opus Nothing Was The Same, and in doing so, incurred the wrath of Drake fuck boys fan boys in the comments section; and I could only be bothered to half-review his 2015 effort, If You’re Reading This, It’s Too Late.

And now Drake has returned from his perch high upon the CN Tower, where he gazes down on “The 6”—what he lovingly refers to Toronto as—with the long gestating project, Views From The 6, now just shorted to VIEWS (yes, all in capital letters like that.)

To say that listening to VIEWS is an exercise in patience is an understatement. It’s a bloated, self-indulgent affair—clocking in at a mind boggling 20 tracks. Worse than that, it’s a horribly turgid album, whose first half limps along lifelessly through song after song that offer nothing memorable to discern one from the other.

The main issue I take with this album is the same issue I’ve taken with Drake in the past, and that’s the subject matter he chooses to cover in his body of work. By all accounts, it’s very difficult to be Drake. Fame comes at a price, and that price weighs heavy on his head.

Drake spends a bulk of VIEWS lamenting his tragic life—the money, and how it changes things, the difficulties of maintaining friendships (“I can’t trust no fucking body,” he belts out at one point.) But even more than that, VIEWS is about the difficulties maintaining a relationship with a woman.

It’s also during the album’s first half that I realized, while Drake has spent the better part of a decade finding massive amounts of success as a popular recording artist—he’s not very good, is he?

Like, I mean, for a singer and rapper, he’s not very technically gifted—so what is it about him that has made him so successful?

Sure, “Best I Ever Had” was a novel hit with its punch lines about making a pussy whistle like the theme from “Andy Griffith,” but what is so special, or unique, or captivating about Drake as a performer that makes him someone we should care about?

On VIEWS I hesitate to say he’s phoning it in, but there is little to no energy coming from him as he blandly sings and kind of shout raps his way through complaints about how long it takes for the object of his affection to message him back.

The second half of VIEWS isn’t, like, any better, really—though there are a few reprieves. While it’s nothing major lyrically, the beat to the recently released single “One Dance,” arrives sounding like a god damn revelation when compared to the 11 songs that come before it.

Then there are the surprising lyrics in “Childs Play” about Drake’s fondness for The Cheesecake Factory—and how since it’s a family restaurant, he doesn’t want to engage in an argument with the woman he is dining with. As laughable as it all is, it’s really one of the one few engaging, interesting moments on the album.

Similarly to Beyonce’s just released Lemonade, which featured the seemingly one-off single “Formation” tacked on at the end, VIEWS concludes with the song that launched a thousand internet memes—the infectious, polarizing “Hotline Bling”—showing up here as nothing more than a bonus track.

Really, the album concludes with the title cut—a somber reflection on Drake’s road to success, which ends with the very poignant line: “If I was you, I wouldn’t like me either.”

You aren’t going to get an argument from me there.

What are the things that one can take away from an album like VIEWS? That Drake is proud of where he’s from, but due to the massive amount of success he’s found, his life is incredibly challenging, and since that’s all he knows, that’s what he’s going to rap and sing about. He just wants love, but he can’t seem to find it, and even when he has love, he can’t seem to keep it.

There are people who don’t like Drake—there are those that call him “the softest in the game.” Then there are people who really, really like Drake—taking to Twitter and calling VIEWS a classic even before it was released. I tried. Really. I did. Part of me knew I wasn’t going to like this album even before I pressed play, and I almost didn’t want to spend the time listening to it, and writing up a stupid review of it for that very reason.

But I tried. I thought maybe this’ll be the time that Drake finally clicks with me and I see what’s so great about him. But it didn’t happen. And for an hour and twenty minutes, I was pretty much bored to tears by an uninspired, incredibly boring, flaccid listening experience.