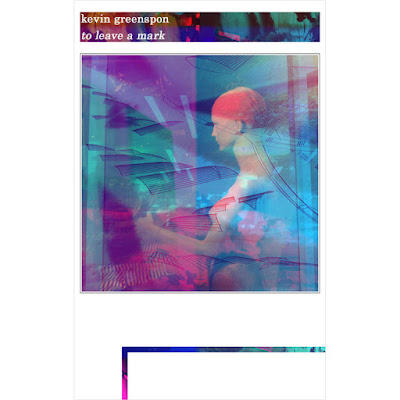 I suppose over the given duration of an artist’s career, some growth and change are to be expected. Such is the case with experimental musician and Bridgetown Records gawd Kevin Greenspon.

His earliest material of guitar compositions were, to say the least, incredibly harsh at times—just listen to anything from his collection In Serial; a bulk of it descends into horrific, cacophonic feedback and noise.  I mean, for me, it’s great, because I like that sort of thing. But it’s not for everyone.

Other pieces tried to rein that dissonance in a bit, folding it into more ambient, and accessible soundscapes—peaking at this shift with his early 2012 effort Maroon Bells.

Greenspon’s last solo effort, 2013’s Betrayed By The Angels saw him shifting away from any kind of guitar work—ambient or otherwise—and favoring more cascading waves of synthesizer tones. And, in a sense, “Happiness Pt. 2,” the first track on Greenspon’s latest solo joint, To Leave A Mark, is a natural extension of that sound. For 4 minutes, plaintive synth melodies twinkle and shimmer around you. It’s charming, hypnotic, and its pattern of descending notes and sounds is catchy—something that, even in a genre like “experimental” music, Greenspon has always been a pro at incorporating.

However, To Leave A Mark, is a major stylistic departure from anything else Greenspon has done up until this point. “Happiness” is a bit of a false sense of security—it soothes you, and lulls you in to what you think the tone of the rest of the record is going to be.

The rest of To Leave A Mark owes much to the early 90s techno and electronic landscape—still focusing on a pop sensibility, but maintaining a cold, mechanical atmosphere thanks in part to the synth propelled beats and sounds.

I suppose the weird sci-fi robot looking mannequin on the front cover could have been a dead giveaway of the heavy emphasis on technology.

To Leave A Mark is an adventurous departure for Greenspon—and it’s not all unnerving beats and skittering synth noises like on “Imprint Impulse” or “Lexical Trap.” There is some warmth and comfort found on the album’s final two pieces—the slow rushes “A Step Towards” and the title track both recall a similarly evoked feeling from Greenspon’s best ambient guitar work; here, the execution is just performed using a different instrument.

It’s an intriguing and restless balance that he strikes on To Leave A Mark. Greenspon has done a little bit of everything since starting to release material in 2008; outside of the ambient and harsh instrumental work that he’s primarily known for in the underground tape label scene, he put out a split EP with Cloud Nothings, comprised of lo-fi, fuzzed out, bizarre garage pop—a style he did revisit with his friend Jon Barba on the 7” Already Dead in 2012. After two years of relative silence and work on his label, releasing myriad cassettes for others, it shows that as an artist, Greenspon is still evolving with his peers, his own influences, and the times.

To Leave A Mark is out now on Bridgetown as a cassette, compact disc, or digital download.