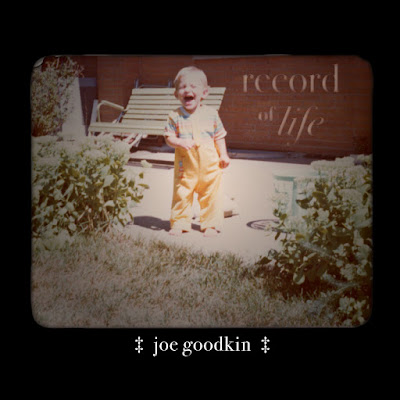 Every time I’ve listened to Record of Life, I’ve started to cry.

I suppose I should back up here.

I was introduced to Chicago-based singer/songwriter JoeGoodkin through my job as a writer for the Northfield News, and I’m pretty sure this is the only time that my job and this blog will ever intersect.

For a number of years, Goodkin has been touring the country performing a song cycle he wrote based on Homer’s “The Odyssey.” He was playing his “Odyssey” show at both of the colleges in town, and I wrote an advance on the event—talking about his career and how he developed the concept.

During our email exchange, I think he may have mentioned he was working on a new solo EP (released under his own name, and not via his band Paper Arrows) and that he’d be putting it out later in the year. I told him that I wrote for this blog, and that I’d be down to review it once it was closer to the time of the record’s release.

Well now here we are, on the eve of Goodkin’s Record of Life, a heartbreaking, profound, self-aware and self-referential set of six astoundingly personal songs that cover marriage, divorce, life, death, dogs and cats, love and loss, regrets, getting older, friends we don’t see enough, fragmented childhood memories, and just about anything else that makes up what you could call “the human condition,” all set against the backdrop of Chicago.

In short, hyperbole aside, it’s nothing short of a statement of beauty and a triumph of the human spirit.

“I’ve got a long list of regrets that I keep in my head,” he sings—the opening line of the first track “Dog and Cat,” a song that, if anything, serves as a bit of a thesis statement for the record—outlining who Goodkin is as a songwriter, and the premise for Record of Life.

Goodkin knows exactly what he’s doing on a majority of Record of Life—he’s trying to break your heart.

On “Gray,” the first song he wrote for the record, he asks “How do we know to say goodbye,” as he prepares himself for the time when his grandfather, as well as his beloved dog, will both pass away.

On “My Friends,” the album’s incredible centerpiece—underneath grand, sweeping guitar plucking, Goodkin paints a picture of his two best friends from high school—coming of age in Chicago in the mid 90s, before all going off their separate ways, and the struggle of maintaining friendships for over 20 years. The way he says, “I meant it every time I said ‘I love you man,’” with his voice multi-tracked, makes you want to call everyone you ever fell out of touch with just to say hello, and apologize for not keeping up your end of the friendship.

With “Three Ghosts,” he gets even more personal (if that’s even possible) talking about people from his past—some of them are dead, and one of them he never even met; to make things even more grave, all of the deceased mentioned within the song committed suicide.

It’s not all devastation, however, on Record of Life. Goodkin realizes that he is now the age his parents once were in old family photographs on the aptly titled,” As Old As I Am Now”—the concept of which is a big of a paradigm shift in thinking about time, your family, and your own mortality.

If “Dog and Cat” serves as the introduction to Goodkin’s life and the record, “Something to Love” serves as the conclusion—it’s the most self aware of the set, with the goal of the song being to write one more song for Record of Life. In most cases, something this self-aware would come off as cloying and irritating. But here it works, sealing up these songs within themselves.

I asked Goodkin how he put himself in this kind of a headspace—to write something so self-contained. He said he always ‘writes his way in’ to an album, and then stops and looks at the themes and ideas he’s collected, then tries to ‘write his way out.’

He said that “Gray” was written from a different place—the rumination on the impending losses surrounding him—and it put him in a different frame of mind. Rather than writing with his band, Paper Arrows, in mind, and rather than have a broad, shallow connection with his lyrics, find a deep, and narrow one.

After writing “Gray” and “Dog and Cat,” he said that the rest of the material came falling out: “I wrote the entire album in two months. I thought about the personal things I'd wanted to write about but hadn't, and just wrote about them.  There's a terror in full-disclosure/narrative writing but there's also a freedom: you just tell the truth so that part of it's easy,” he told me.

There is some real soul baring honesty on Record of Life as he discusses his own divorce, his subsequent second marriage, and his wife’s former partner (one of the subjects of “Three Ghosts.”) It’s the kind of record you can liken to a confessional letter you write, seal in an envelope, and drop in to a mailbox—only to regret doing it the instant it slips from your hand.

But that’s also what makes it so good.

Musically, it’s a raw, simple record—with Goodkin multi-tracking both his distant, haunted sounding electric guitar, as well as his vocals. But it’s also a warm, comforting record, and the fact that it’s so sparse allows you to focus on just how dense the lyrics are.

Despite Goodkin’s thought process to write an album to create a deeper, yet narrow connection with listeners, it’s actually easy to find bits of your own human condition within his own—specifically the passing of a companion animal, realizing your parents were once as old as you are now, and the difficulties of maintaining friendships over the years.

On Record of Life, Joe Goodkin takes you for a half-hour journey through his experiences, and through that, he challenges you to create your own record of life using the powerful imagery his lyrics evoke, putting yourself back into memories you may not want to revisit, or have forgotten about completely until something he says triggers that memory for you, creating an intense and interactive listening experience.

Without a doubt, Record of Life is one of the most important records of 2015.

Record of Life is out on June 30th, via the man's own Quell Records imprint.