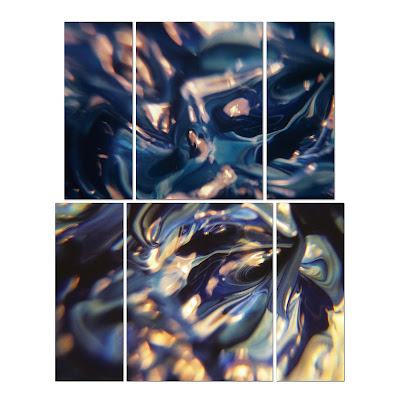 Since the inception of this blog, I think I've repped about five releases from Kevin Greenspon’s most excellent Bridgetown imprint. It’s one of the more professionally run tape labels out there right now, and he’s reached his milestone 100th release.

Certainly not a conflict of interest, Bridgetown 100 is a split LP between Greenspon himself, and like-minded artist Paul Skomsvold, also known as Former Selves.

It’s been a minute since K.G. has released any of his own material—early in 2012, he dropped the Maroon Bells EP, and last summer he collaborated with his friend Jon Barba (who records under the moniker Nicole Kidman) and released the Already Dead 7”.

Greenspon’s solo output has grown more ambient and more transcendental, and his contribution to this split LP, Betrayed by The Angels, is a natural, and incredible step forward with the sound he’s been honing for years. It’s also a gorgeous record—at times heartbreaking, at times unforgiving—and it is a remarkable accomplishment.

Blending shimmering guitars and synth tones until you can't tell them apart; Greenspon’s compositions continue to form, even as he is tearing them down at the same time—on “Against Words,” beautiful, and tranquil sounds are juxtaposed against harsh, unrelenting feedback, creating a jarring and honest listen.

Betrayed’s opening track, “The Last Good Day,” is by far the most affecting piece, creating countless layers of contemplative synths and somber guitars. It also sets the stage for the six tracks that follow, each one building off of the atmosphere of the one before it. Greenspon’s side of the split ends harshly, with “Truth and Falling,” where the underlying rumble of feedback slowly overtakes everything else in the song—finishing the album with around forty seconds of just straight up noise.


Skomsvold’s portion of the split, Apropos of Golden Dreams, opens with the heavily-Instagrammed nostalgia inducing feelings of “Golden Dreams,” segueing nearly seamlessly into the second piece, “Empyrean Waltzes,” that segues into the closing track, “Watercourse Way.” Not so much a “song cycle,” or a “concept album,” but the three pieces work together to take you on a multi-layered journey.

Skomsvold continues the bittersweet/nostalgic feeling into “Watercourse Way,” which walks a fine line between melancholy and hopefully—similarly to the one-off project from Sigur Ros frontman Jonsi, Riceboy Sleeps.

K.G. and Paul Skomsvold/Former Selves are no strangers to one another—their music complementing each other well in just about every area you can think. They both contributed pieces to a cassette release from last year, the now out of print Ingress/Perspective. This split LP really affirms the belief that their music isn't really an extension of each other, or not even really that they are mirroring one another, but it shows two artists who are able to evoke very strong feelings from the work they do. If you let it envelop you, as you should, Betrayed By The Angels/Apropos of Golden Dreams is an emotional listening experience.

Betrayed By The Angels/Apropos of Golden Dreams is available on LP and as a digital download, via Bridgetown Records.