Real Men Give Paddington (or, Easy Jokes About Toxic Masculinity) 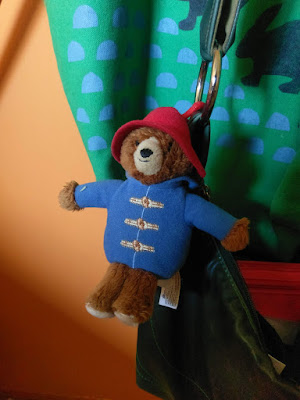 Last year, around this time, I contributed something to the 'man issue' of River Valley Woman, a women's magazine (obviously) published in southern Minnesota. The editor, Eileen, had come across my work in Scene, and had approached me about putting something together. Either too polite to tell me to stop sending her stuff, or maybe she does really like it (?) I wrote another piece last fall about mental health, and the one earlier this year about finances.

The 'man issue' of RVW is upon us again, and even though this was written during a time of personal duress, I was pleased with how this came together; however, the hot button issue of a 'pro-life billboard' was admittedly too much for the magazine, and Eileen had to cut around it. So what I present to you below is the unedited version of my piece. The version that ran is available to read here, on the RVW website.

Also, it seems worth noting that, after I figured out the angle I was taking, I wanted to title this, "Real Men....How Many of Us," but I thought that in 2018, a Kanye West reference was not a super great idea; and also, how many women reading this magazine would get a moderately obscure Kanye West reference?

I was heading south on I-35 recently when a billboard, just outside of Lakeville, caught my attention.

The ad features a man holding a newborn baby; like, this baby is fresh out of the oven, and the man is wearing what a hospital-issued cap over his hair. The implication of the billboard is the child belongs to this man, and in huge letters the billboard states, “REAL MEN LOVE BABIES.”

There’s fine print, too—alerting motorists to the fact that a baby’s heartbeat begins 18 days after conception. This billboard, if you hadn’t figured it out, is a large piece of pro-life propaganda.

This got me thinking—not about being pro-life or pro-choice. No, that’s not what this is about.

This billboard got me thinking about the idea of being a ‘real man.’

An easy joke I can make here is I must not be a real man because, to begin with, I’m not very fond of being around children.

An easy joke I can make here is I must not be a real man because my wife and I don’t have any children, and we’re going out of our way to ensure that is how it stays.

Based on the genitals attached to my body and crammed into my underpants, I am a ‘man.’

But what makes a man a ‘real man?’

And using this billboard’s bold statement as a metric, if I’m not a ‘real man,’ what am I?

Temporarily forgiving its unfortunate induction into the ‘bro-intellectual’ canon, there is a moment in the movie Fight Club that comes to mind: Brad Pitt and Edward Norton are riding the bus, when Norton spies a Gucci advertisement for men’s underwear.

“Is that what a man’s supposed to look like?” Norton deadpans, to which Pitt begins cackling manically.

Is a ‘real man’ supposed to spend hours at the gym in order to have rippling muscles?

An easy joke I can make here is I must not be a real man because, despite the upper body strength I have now thanks to my rigorous day job, I am actually incredibly frail.

A strong breeze could knock me over.

There is a stereotypical idea of a ‘real man,’ and the activities they are supposed to enjoy: a ‘real man’ like sports, specifically football, because it’s incredibly violent; or hunting, because it’s completely okay to take the life of another living thing; or yard work, because by mowing your lawn twice a week, you’re proving to the other men in the neighborhood that you are the realest man of them all.

A ‘real man’ is handy—he can build; he can repair; he is not intimidated when he takes his car in to the shop when it’s making ‘that sound.’

A ‘real man’ doesn’t feel—he buries his feelings deep inside, to a place so far down, he may never be able to find them again.

I don’t like sports; I am adamantly opposed to any kind of cruelty toward animals; yard work is the bane of my existence; I measure once and cut twice and hope for the best.

When the car makes ‘that sound,’ I had the keys over to a mechanic, hoping the grin on his face is not implying he will take advantage of my lack of mechanical know how.

I wear my myriad feelings like a merit badge covered sash, draped cross my feeble body.

Despite my best efforts, I am still a man. And without getting too existential, I am ‘real.’

Questioning somebody’s masculinity is an age-old insult—e.g. saying, “If you were a real man...” in order to get a rise out of somebody, hoping they’ll magically pull all that masculinity out from wherever it was hidden, suddenly putting it to use.

There is a fine line between masculinity, and ‘toxic masculinity;’ of falling into a stereotype, a societal or familial expectation—or, instead, choosing to play against type.

I’m not really sure why anyone would want to identify as a ‘real man’ at this point, or why they’d feel attacked if someone used a lack of masculinity as an insult. Being a man isn’t that great to begin with, and being ‘real’—like, alive in the world today, is not much better.

On Valentine’s Day this year, I gave my wife a small, plush Paddington The Bear keychain. She took a photo of it, putting it on social media with the caption, “Some men give flowers. Real men give Paddington.”

Does this gesture make me a real man? Or does it just mean I am thoughtful?

If you want to fire up a complicated gas grill, charring enormous chunks of meat, while sipping a can of beer out of one of those little foam things, all immediately after you’ve built something that will remain intact and not fall apart the second someone walks by it—then fine, play into the stereotype, or the idea, of what a ‘real man’ is supposed to do.

However, be self-aware enough to know when to walk it back; know when to be thoughtful, and know when to embrace whatever emotions you’ve suffocated. Know how your masculinity, or lack there of, impacts those around you, and what you can do to change, or grow.