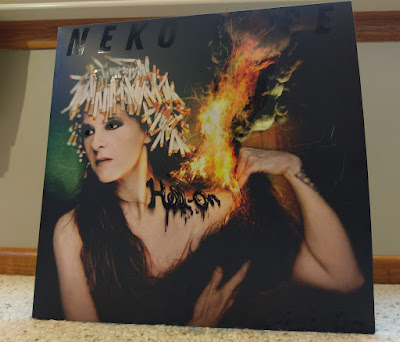 The idiom of not judging a book by its cover is a terrible cliché—this applies to album covers as well, and it’s hard not to think of this expression after taking one look at the cover art to Hell-On, the new album from Neko Case.

Though the eyebrow raising art should come as no surprise to those who are familiar with Case: on the cover of Middle Cyclone, she was depicted hunkered down on the hood of a car, holding a sword; a strange portrait of her head, drastically distorted, was found on the cover of her last record—2013’s masterful The Worse Things Get, The Harder I Fight, The Harder I Fight, The MoreI Love You; things were weird in her early days too—just take a quick look at the covers of Furnace Room Lullaby or Blacklisted.

Wearing a hat, or crown, or something, made out of cigarettes, her hair exaggerated in its color and length, swooping down to cover her bare chest, Case looks stoically off to the side as serious flames are superimposed on her shoulder, with the title of the record, written seemingly in feces, underneath.

Musically, Hell-On begins in such a way that, alongside the cover art, wants to keep the listener at an arm’s length. Opening with the titular track, it takes its time reaching the moment of accessibility, where it sounds even remotely familiar to anything Case has recorded in the past, spending its first half dabbling in unsettling dissonance, odd rhythm, and strange, yet sometimes whimsical, instrumentation.

But following that, Hell-On returns to familiar musical territory—and even as the album slowly and deliberately unfolds song by song, and even with the occasional dip back into something slightly more difficult, it’s an incredibly profound, stark, and dense artistic statement that takes a hold of you and never really lets you go. 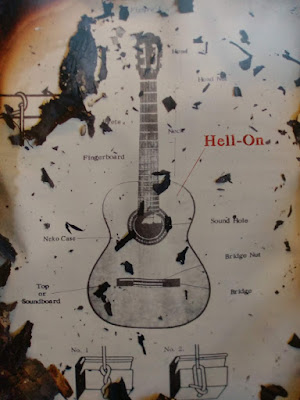 In the world of contemporary popular music, five years can feel like an eternity, but that’s how long it’s been since Case released a solo album. In the interim, she hasn’t been idle—she contributed vocals to two albums with the long running Canadian indie rock collective The New Pornographers, and released an excellent collaborative album with k.d. lang and Laura Veirs.

She also spent time trying to privately deal with personal matters—both of them unfortunately becoming public; in 2017, while in Sweden, working with producer Bjorn Yttling (of Peter, Bjorn, and John fame) on tracks for Hell-On, her home in Vermont caught fire. At the time that the news was reported, Case denied that it was even her home, though this year, in the album cycle for Hell-On, admitted it was her home that burned—she had been trying to keep it out of the press completely because she was dealing with stalkers, and went as far as to call the local paper to beg the editor to remove her name from the story.

In an interview with Pitchfork, she explains the editor wouldn’t concede, and she called him a cunt—when asked to comment, said editor told Pitchfork that the story on the fire at Case’s house was handled no differently than any other public safety matter, adding it was a ‘newsworthy’ story due to taxpayer resources being used to extinguish the fire.

As someone who worked for a newspaper for two years, though I never truly covered ‘public safety,’ I can say that the ambulance chasing that comes when there’s an accident or a fire, or something else where people are at their most vulnerable, always made me incredibly uncomfortable. So I can see why, for privacy’s sake, Case wanted her name taken out of the story, and it doesn’t surprise me in the slightest that the newspaper staff she dealt with did not give a shit about the human aspect of something like that, and simply saying that it’s ‘public information.’ 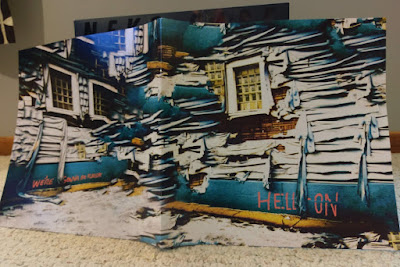 While this incident may have happened while Case was already working on Hell-On, the private and personal tumult have certainly informed the record; the house fire alone single handedly inspired the lavish, oversized liner notes that are housed in the vinyl edition of the album, and knowing this element of backstory, it’s not too difficult to read into lyrics like “You don’t have permission to take any pictures/Be careful of the natural world.”

Hell-On is structured so that it finds its pacing with the album’s grand, sweeping second track, “Last Lion of Albion,” and Case has not so much front loaded the album with its catchiest or most accessible material, but following the halfway mark, it becomes slightly less focused on hooks, and the songs become a little weightier. And following the slightly uneven opening track, Hell-On enters a pretty flawless five song run—the aforementioned “Albion” gets an assist from k.d. lang on additional vocals during the gigantic, shout along refrain; Case slows the pacing down with the evocative meditation on femininity “Halls of Sarah” then channels girl groups from the 1960s with the infectious groove and dark humor of “Bad Luck.”

Heading into the album’s halfway point, Case unveils the album’s longest track—the sprawling, seven minute “Curse of the I-5 Corridor,” featuring guest vocals from Mark Lanegan, lending his cigarettes and whisky baritone in an effort to let the song’s incredibly personal lyrics resonate. On it, Case reflects, with a moderate amount of regret, on the life she’s made for herself over the last 20+ years as a musician—“I waited too long to write this down,” she begins, continuing about missing the time when things were more mysterious—“I miss the smell of mystery—reverb leaking out of tavern doors and not knowing how the sounds were made,” she explains, before uttering the album’s bluntest line: “I left home and faked my I.D., I fucked every man that I wanted to be; I was so stupid then.”

The album reaches its crest with what I think is its best track, “Gumball Blue,” co-written with Case’s New Pornographer’s bandmate, Carl Newman. It begins very unassumingly, and remains that way until the end, when it bombastically explodes—but it’s the imagery Case uses in “Gumball Blue” that makes it one of the album’s most impressive moments.

“So sorry for the trouble,” she begins. “The times we’ve been afraid of each other because we didn’t understand all the spells we cast without trying. We pushed through, shipwreck in my lap. Sorry stains my mouth gumball blue.”

As the album’s second half opens, Case adds a flair for the dramatic with “Oracle of The Maritimes.” Co-written by Laura Veirs, it’s a stark, big sounding ‘story song,’ one that juxtaposes the ideas of beauty and ugliness, and balances that with ideas of a woman’s identity. It’s heavy duty, and it only gets heavier as Case explores similar themes on “Winnie.”

As Hell-On descends into its final three tracks, it arrives at what is probably its most surprising, and also one of its best (right on par with “Gumball Blue”) moments in “Sleep All Summer,” a slow burning, somber love song that is technically a cover song—written by Crooked Fingers’ Eric Bachmann, it becomes a devastating duet between Bachmann himself and Case, pleading with each other during the song’s refrain: “Why won’t you fall back in love with me?” The cover, presented here, is quite an improvement on Bachmann’s original, recorded in 2005, as well as being vastly better than the 2009 cover from St. Vincent and The National, taken from a Merge Records 20th anniversary compilation. 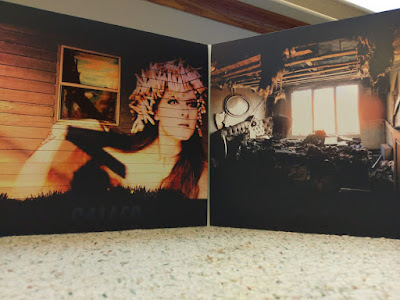 She re-teams with Carl Newman as co-writer on the shimmering, yet haunting “My Uncle’s Navy,” one of the album’s darkest and heaviest sounding moments, it’s downcast sonics become a far cry from the alternative country twang that people associate Case with—though she does return to that on the album’s closing track, “Pitch of Honey,” a song, much like the opening track, that is split into two distinct sections, the latter here, being when that familiar musical aesthetic returns.

There’s a lot to take in with an album like Hell-On—I think that goes without saying. There’s also a lot that reveals itself upon additional listens; it’s an immediate album in many respects, sure, but there are so many recurring ideas throughout—e.g. so many of these songs involve lyrics about fear, or being afraid, and Case returns to imagery of the sea, or at least water, on more than one occasion. It’s details like this that are important to understanding the depths this album goes to, and those are the kind of details that you begin to take note of after sitting with the record many, many times, opening yourself up to it, and all of its complexities.

Hell-On is a powerful album, one that, even in moments of unevenness, is meant to be an immersive listen from beginning to end, albeit with a few stand out moments that can be removed from the total context. As a songwriter, Case is continually full of surprises—an evocative, imaginative lyricist, there are fragments from The Harder Things Get that still haunt me to this day, five years after the fact; and there will most certainly be parts of Hell-On that I am unable to shake for years to come.