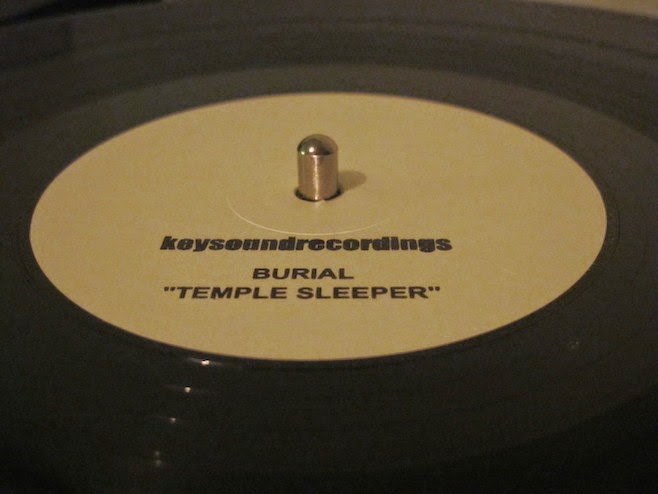 There are very few things in life that make me let out some kind of audible noise of surprise or excitement. And usually, the things that DO cause me to make such a noise are music related—like despite how underwhelming it kind of ended up being the end, I was pretty jazzed when I read that Get On Down had reissued Hell Hath No Fury on vinyl.

The other day, I made some kind of noise in my cubicle in the newsroom when I saw the headline that there was A NEW SINGLE FROM BURIAL AVAILABLE RIGHT AT THAT VERY MOMENT.

Burial missed his usual deadline of sneaking in at the end of December and fucking up everybody’s “Best of” list for the year—he did it in both 2012 and 2013 with surprise releases, but 2014 was a very quiet year for him, save for the throwaway track that he contributed to the Hyperdub 10.4 compilation.

The Pitchfork story hasn’t (and probably won’t be) updated to reflect it, but Fact Magazine claims that “Temple Sleeper” is “new-old” music, and if you compare what occurs throughout its six minute running time to Burial’s output over the last four years, you’d draw that comparison to.

Since the dude is so enigmatic, it’s really tough to say when this was really recorded. Shit, he could have made this at the start of the week, you know? Who is to say? I’m just going by what the internet is telling me, which is how we get our information, right?

“Temple Sleeper” is not, like, essential Burial. Nor does it redefine what he does musically speaking. It’s also no throwaway track. If it was recorded prior to, say, 2011 or 2012, it serves as a bit of a preview of what he wanted to do with music—and that is to make multi-movement “pieces” rather than short four-minute songs. Looking at it that way, “Temple Sleeper” arrives as a bit of an early sketch of things to come later on.

The track itself wastes no time getting down to business with your typical Burial affects—crackling static, disembodied voices, and overall dissonance. Within the first movement however, “Temple Sleeper” clips along exponentially faster than anything he’s done in awhile, favoring a speed and very simple synth pattern that seems like they are “club ready.”

The second movement of the track begins about four minutes in, and the switch in direction is pretty sudden—drastically shifting to a heavy 90s flavored drum n bass style rhythm with a weird sample of someone yelling “come on!” thrown in for good measure. The intensity of this section is out of hand—it’s like someone just took a bunch of ketamine and is wylin’ out; or, slightly less interesting—it sounds like music from a Mortal Kombat movie.

The third movement arrives less than a minute later—slowing things down slowly, or at least trying to scale back on the intensity. It’s another “club ready” beat, reminiscent of Moby’s production work in the mid-90s, complete with a pitch-shifted voice sample, looped, saying, “We’re about to go to another dimension.”

And then, just like that, it’s over. The whole thing comes to an abrupt stop at 6:38, which is why, again, it feels like a rough sketch or experiment in how to switch gears multiple times throughout the same track.

The fact that Burial has remained nearly anonymous, and incredibly mysterious over the course of the last eight or nine years is still amazing. Dude gets outed, but he still manages to lurk in the shadows—just letting the music speak for itself—and usually, it speaks volumes. Sometimes it comes off as a bit of a definitive statement.  Which his why “Temple Sleeper” is so puzzling. I paid $1.11 for this track—I didn’t think it worth the $12+ (plus international shipping) for the white label vinyl single. But what did I pay for? Meaning, what is the point of this track?

It’s not bad. But it’s also not amazing and life affirming. It feels unfinished and out of place to release it now, in 2015, when Burial has come so far as an artist with a message. So is this some kind of cash grab on the part of the label, Key Sounds? It’s Burial’s first release not sanctioned by Hyperdub. Or if this really is “new” and not “old-new,” is this a sign that Burial has yet changed directions in the way he composes?

Really, all of these questions will go unanswered. The dude rarely gives any kind of information to the music press, and I doubt he will speak on a 6 minute single, seemingly released on a whim.

For the Burial completest it’s worth a listen, but as it screeches to a halt, it leaves one feeling drastically underwhelmed.

"Temple Sleeper" is available now as a white label 12" single from Key Sounds, or as an mp3.