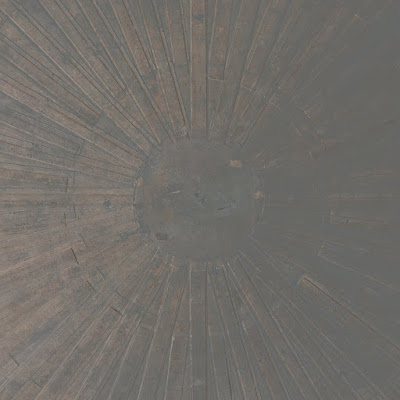 According to the short description of Selva Oscura on the Temporary Residence website, composers and performers William Basinski and Lawrence English have been friends, or at least in correspondence with one another, for roughly five years, and this effort—spanning two lengthy pieces—is the first time they have collaborated with one another.

I get the impression that neither of them are strangers to the idea of collaborations—Basinski regularly works with Richard Chartier, and the Australia-born English’s discography is full of collaborative, as well as solo efforts.

I’m very familiar with a bulk of Basinski’s canon—The Disintegration Loops being the most well-known and possibly one of the most impressive things accomplished in experimental and ambient music in the last 20 years—but he is, obviously, much more than the six hour set of decaying, haunting sounds; though his other efforts, like the four track collection 92982, or his more recent releases, Cascade/The Deluge and A Shadow in Time, all have a very distinct ‘Basinski’ quality to their tone and aesthetic.

Lawrence English, on the other hand, I have really only been aware of by name—he contributed a piece, “Cooperative Drive,” to the 2012 Air Texture compilation, but I, as of yet, have not explored much of his body of work—solo, or collaborative.

From what I can surmise, the two pieces on Selva Oscura—the titular track, running nearly 20 minutes, and “Mono No Aware,” clocking in around 19 minutes—are very ‘un-Basinski’ in the way that they do not build toward something and then slowly begin to decay and fall apart. They are both works that are in constant motion—similar to the lengthy, multi-movement pieces from Andrew Hargreaves’ Tape Loop Orchestra project—meaning that things are regularly shifting throughout, as it leads to some kind of resolution.

The first piece, “Mono No Aware,” more or less orbits around a somber, mournful tone, though it takes English and Basinski a minute to arrive at that feeling—that’s the difficult thing about ambient and experimental music; composing and performing it, I’m sure, are incredibly challenging—to be able to manipulate and sustain these long pulses and drones, and still make it compelling. Writing about it, too, is also difficult—I can’t rely on lyrics to analyze or ‘song structure,’ or whatever.

It’s all about the evocative nature of wordless music—and you have to find the words to describe it.

Across 19 minutes, “Mono No Aware” is, at first, an exercise in reserve, as the duo builds a strong sense of, not so much tension, but there is a very gradual, very deliberate build and growth into when this piece begins to take shape, as it were. It’s around the halfway point—or roughly nine minutes in, when that tension, or anticipation, gives way to low, pensive tones that effortlessly coast in, and, without even realizing it, continue to slowly shift and evolve.

Of the two pieces included on Selva Oscura, “Mono No Aware” is the more direct in its evocative, emotional nature—the titular track, arriving second, focuses more on the long, sustained drone; the first section, lasting roughly six minutes, is also very reserved and deliberate in its execution, with small ripples that give a hint of hopefulness. However, that shifts pretty dramatically as the piece slides into the next movement, and things begin to sound much more ominous.

Punctuated by a low, foreboding rumble, the second section of “Salva Oscura” is dominated by a metallic clanking noise—it all sounds like something right from the third season of “Twin Peaks.”

The piece shifts out of that at around the 10, or 11 minute mark, and ruminates on a sustained, pensive drone—an ‘ominous, ethereal woosh,’ if you will, that gradually introduces some faint slices of synthesizer blips that tear slightly through the fabric Basinski and English have woven—the pensive nature of “Salva Oscura” eventually dissipates into a slightly lighter sounding resolution that brings the piece to its gradual conclusion.

The expression ‘selva oscura’ translates roughly to ‘dark wilderness’—or, at least that is what a quick internet search told me; I suppose that is a fitting title for the sound, and structure, of the collection’s titular piece. As a whole, Selva Oscura is compelling, though not as much so when compared to Basinski’s other efforts—it lacks the transcendental nature that he is able to conjure, and perhaps that comes from the collaborative nature of this project.

The aforementioned synopsis of the album states this effort was recorded simultaneously in both Australia as well as in the United States—though it doesn’t elaborate much more on how, exactly, that works. Despite the fact that it may not be as captivating or immediate as other experimental and ambient music I’ve listened to in the past, it is still an interesting listen, and the collaborative nature gives the whole project an air of mystery to it that definitely finds its way into the compositions that Basinski and English created.

Selva Oscura is out on October 12th, on CD or LP, via Temporary Residence.