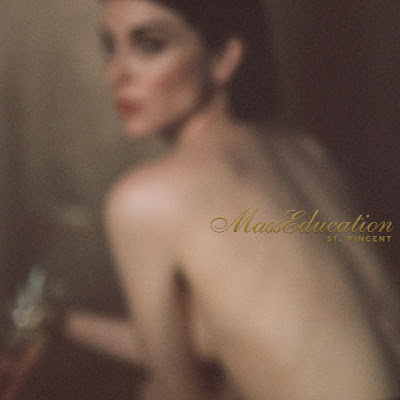 Roughly a year ago, when Annie Clark released the fifth album under her St. Vincent moniker, the polarizing experiment in hyper-sexualized,Technicolor pop music, MASSEDUCTION, the first time my wife and I listened to it was in the car—not the most ideal setting for a first time through with an album, but there had been some kind of hang up with the shipping of my LP (it wouldn’t arrive for well over another week) so we had to make due with the consolatory mp3s I put on our iPod.

As my wife scrolled through the device, looking for the album, she exclaimed, ‘Mass Education,’ when she found it. I had to break it to her that it was, in fact, called ‘Mass Seduction,’ and that it was all one word, and all the letters were capitalized.

So imagine her delight when, a year after the release of that album (one we are both still on the fence about), Clark returned to that set of songs, had dramatically rearranged them for piano—performed by wunderkind Thomas ‘Doveman’ Bartlett—releasing a companion album of sorts, aptly titled, Mass Education.

Recorded a full two months before the release of MASSEDCUATION, an interesting, strange fact about this companion piece, Mass Education finds Clark and Bartlett stripping these songs completely of their slick pop trappings—the liner notes, a printed, charming ‘hand written’ letter from Clark herself, explains she and Bartlett didn’t rehearse together, or even discuss how to approach the material in this format; instead, they recorded each song live, together, performing two or three different takes, then selecting the best one to include in this collection.

The thing that keeps MASSEDUCATION at an arm’s length—well, one of the things, is that it’s less of an album and more of a statement, or declaration, and a culmination of a fully realized persona. Clark, as St. Vincent, was always swiftly moving away from the idiosyncratic ‘indie rock’ she started making in 2007 with her debut, Marry Me; she always had oddball tendencies that slowly started to reveal themselves. I guess I thought she had reached her ‘peak’ or whatever in 2014, with the self-titled St. Vincent album—however, I was wrong.

The other thing that keeps MASSEDUCATION at an arm’s length is, I hate to say ‘sloppy’ song writing—but it’s ‘pop’ song writing—I guess we can thank Jack Anotoff for that. In a sense, Clark is way too smart for that kind of thing, but on that album, she embraced it whole-heartedly.

Jumbling the song’s original track list, Mass Education scales back the hyper-sexualized façade of the originals, transposing them into a reserved and pensive sensuality. Because the structure has been reorganized, there are some very awkward transitions—that is one of the first very noticeable things about Mass Education.

Sometimes it’s really tough to tell, and that’s the frustrating thing—it’s an album with no easy answers.

When Clark described MASSEDUCATION, she said it was an album about ‘sex, drugs, and sadness,’ and it’s that last part—the sadness—that was mostly lost in the pop music sheen of the bombastic arrangements the songs were originally written with. Here, however, all three of those things are loud and clear.

There are some songs that don’t really change all that much when reinterpreted for solo piano—“New York,” which originally featured Bartlett on piano, is less jaunty in this form, but the sentiment is still relatively the same; and “Happy Birthday, Johnny,” one of the most devastating tracks from MASSEDUCATION, and perhaps the most personal Clark has ever gotten with her songwriting, was originally very sparse. Now it is just, you know, even sparser, and a little less structured.

That kind of loose, nearly improvisational tone that Mass Education takes is charming, and admirable. Bartlett and Clark have known each other for a decade, and have run in the same social, and musical, circles, including The National and Sufjan Stevens. The whole ‘two friends playing off one another’ atmosphere from their recording sessions is palpable, and makes the entire endeavor interesting to say the least.

Across the album’s 12 tracks (it does away with the instrumental interlude from the original) there are specific songs that lent themselves well to the reinterpretation—Clark opts to open this collection with “Slow Disco,” MASSEDUCATION’s penultimate moment—one that she has already chosen to remix, releasing the “Fast Slow Disco” single earlier this year. Jokingly, she called this iteration “Slow Slow Disco,” and the somber, bittersweet anxieties of the lyrics—“I know what everybody’s thinking,” Clark swoons during the song’s second verse. “I’m so glad I came but I can’t wait to leave”—rest beautifully atop Barlett’s confident piano arrangement, and in a sense, this very short, haunting vignette becomes the Mass Education thesis statement.

Once the MASSEDUCATION opening track, now Mass Education’s final moment, “Hang On Me” also translates incredibly well to a simple arrangement—though in its original incarnation, it was one of the more sparsely structured tracks. If “Slow Disco” is the thesis, then “Hang On Me” becomes a bit of a closing remark, with Clark’s fragile voice singing, “You and me—we weren’t meant for this world,” though here, it’s unclear who she’s talking about: is it she and the former lover (presumably Cara Delevingne, whom a bulk of MASSEDUCATION is more or less about) or, in this case, is it she and Bartlett—two friends who have spent a number of infinite New York City nights together, drinking too much, and waking up to what Clark calls ‘exquisite hangovers.’

Then, there are the other eight songs on Mass Education—seven, I guess, really, because we should just get this out of the way right now: the most mercurial, perplexing moment on MASSEDUCATION, the maligned, glitchy pop of “Pills,” doesn’t work here either. It was a bad song to begin with, and stripping it down to just a piano, doesn’t help it be any better.

So there are these other seven songs then, and here’s what is frustrating about Mass Education is that there are moments, or parts, or sections of these other songs that really do work, or really are impressive—then there are other parts or sections or moments that are awkward, or cringey. It’s a maddening given and take that Clark and Bartlett manage to sustain, presumably unaware of how not everything is going to translate from heavily processed pop to bare bones piano.

Or maybe they are aware, and they just don’t care.

The prepared piano (while pretentious) lends a touch of whimsy and charm to the slink of “Savior,” though the lyrics about kink and fetish don’t exactly land when they are only backed by a single instrument—however, this is one of those songs where you can hear that give and take: Bartlett ditches the prepared piano during what serves as a refrain for the song, and Clark herself abandons the sultry swagger that she has been singing with, as she literally pleads in a gorgeous higher register, singing “Please,” over and over again, as the piano swirls around her.

The titular track, or what was the titular track from MASSEDUCTION, finds Bartlett stalking around the lower keys on the piano, creating an ominous environment for Clark to yelp, “I can’t turn off what turns me on.” This is, as a whole, one of the songs that doesn’t really work—it’s not as unlistenable and insipid as “Pills,” but the dissonant and sparse accompaniment doesn’t assist Clark—the song itself, lyrically, is mostly the same repeated phrases which I guess may work a little better in a pop song format. It was also here, especially at the end, when I got a hint of mid-90s Tori Amos. I hate to say that, almost, because I don’t want to be like, “Oh it’s a female singer and a piano so it sounds like Tori Amos,” but there’s a moment, near the end, where Clark becomes unhinged, her voice caterwauling, and it reminded me a lot of the conclusion of Amos’ “Professional Widow.”

Clark is raw and unhinged throughout a majority of Mass Education—I think that’s the point. There’s no time for multiple takes to make sure the vocals land just how she wants them. She never really misses a note, but her voice is certainly not as polished or labored over as it is on her other studio albums; it’s a trick that adds to the intimacy of the project.

I hesitate to say that the songs presented in Mass Education are ‘dramatic’ reinterpretations, mostly because some of them might not be dramatic enough to push the song in question forward. As terrible as a song like “Pills” is, it maybe would have been more palatable if Clark and Bartlett had, rather than just mostly transcribed the original structure to be suitable for showy piano, actually stripped the song completely and started over from a different place.

There is drama, though, on Mass Education—don’t get me wrong. Bartlett and Clark maintain the theatricality from the original, just present it in a different light. “I try to write you a love song,” she whispers somberly at the end of “Los Ageless.” “But it comes out a lament,” a line that becomes much bigger than itself when you look at both this, and MASSEDUCTION as break-up records, reflecting on her whirlwind year of sex and drugs, ending in sadness.

In the end, in trying to balance the highs and lows of this companion piece, Mass Education arrives as a bit of an inside joke or anecdote that Bartlett and Clark share that they are trying to let you in on—only you are having a hard time getting it. It’s not a bad album, but it also is not a great album. It frustrates and intrigues, similarly to its predecessor. It also continues to cement Clark as an ‘Artist’ (with a capital A) who has come incredibly far over the last decade plus. It’s hard to believe there was a time, around seven years ago, that she blushed at the idea that the phrase “I spent the summer on my back,” from “Surgeon,” could mean anything other than being depressed—now, she sits with her back bare, both alluring and unsettling in a way I can’t really describe, for the album’s cover art.

As an ‘Artist,’ both MASSEDUCTION and Mass Education are huge artistic endeavors and statements—if you are a longtime fan of Clark’s work as St. Vincent (as I am, and as my wife is who is still undecided about both of these records), just marvel at the fearless risks she continues to take with the St. Vincent persona, in letting you in and keeping you far, far away—it’s a dance of both tension and release that is incredibly admirable.


Mass Seduction is out now as a digital download, on CD, and on LP. Please note if you order the LP from Clark's webstore, it does not come with a coupon for mp3s of the album.
Labels: album review annie clark doveman mass education MASSEDUCTION new album new review piano arrangement reinterpretation slow disco. st. vincent thomas bartlett