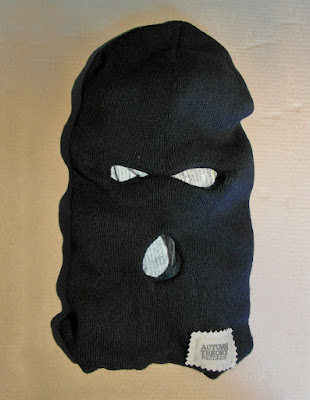 Who is Roland Jones?

I wish I knew—a figure shrouded in an alluring and an unsettling mystique, Jones—whoever he may be, came onto my radar in the spring, when I was introduced to the 199X Lost Tape, the first of three releases in 2018 for Jones.

Trying to find the words to describe what Jones does, musically speaking, is maybe as difficult as trying to figure out who he is—it’s a fascinating, charismatic, and a completely unnerving aesthetic, concocted almost effortlessly.

All three of Jones’ 2018 efforts have been released via the Sound Transitions imprint, based out of Washington State; following the release of the 1999X Lost Tape, Jones returned mere months later with Raw Technique, Volume 2—a follow up to the original Raw Technique collection, released a year ago; if that weren’t enough, Jones has returned yet again with Strictly For Playaz, Volume 6—though, to my knowledge, there are no volumes one through five.

I stop short of saying that what Jones is doing is ‘like nothing else I’ve heard before,’ because there is an almost instant familiarity to it, even if you are hearing it for the first time—that is how effortless he makes this all seem.

Using the descriptor ‘lo-fi’ is a great place to start—everything is seemingly cloaked in an inescapable murk, and from a production standpoint, it isn’t so much ‘chopped and screwed,’ or drenched in a codeine haze—but you get the idea of the kind of atmosphere Jones creates on these releases. It’s like the convergence of rap music from the early to mid 1990s, DJ Screw, and SpaceghostPurrp; it’s so incredibly dark and bizarre, but at the same time, it is so fucking compelling, accessible, and hypnotic.

Jones’ efforts are all released via cassette—with his 2018 output also being available digitally (there is a cryptic message on his Souncloud page about DM-ing him for his canon from 2016-8)—so the pieces are all, give or take, relatively short in length; sometimes they may be too short, at least for my liking. I mean, these releases could really go on much, much longer, and I would be completely happy with that.

How Jones exactly does what he does, though, is still a mystery to me, even with as much as I listened to the 199X Lost Tape earlier this year, and even with how many times I’ve played both Raw Technique, Volume 2 since downloading it at the end of September. Across both releases, as well as on Strictly For Playaz, Volume 6, Jones mixes equal parts of spooky, dusty sounding, skittering, and extremely atmospheric hip-hop beats with other worldly, practically disembodied, and taken out of context vocals, pulled from myriad places, pitch shifted and distorted. I mean, in some cases, you can try searching a repeated phrase or slightly less distorted lyric that you hear in an effort to discover the point of origin—but after repeat listens, it’s truly best just to sit back and enjoy these tapes for what they are, rather than trying to dissect specific elements. 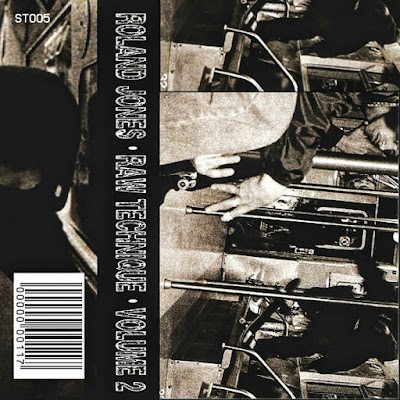 Spanning 16 tracks, the first thing you hear when Raw Technique, Volume 2 begins is a short burst of laughter—a slightly menacing cackle, is more accurate in describing it. The cackle returns throughout the intro track, “Sittin,” as Jones works in a spooky piano sample, and a very bass heavy drum beat.

It serves as a way for Jones to ease the listener into the atmosphere he’s going to create on Raw Technique; it’s also one of the album’s most accessible moments—there are a few of those sprinkled throughout, including the sleigh bell jangles and head nodding groove of “In It To Win,” or the jazzy, energetic, scratch heavy “Episode XV,” which immediately follows “In It To Win.”

That is not to say the rest of Raw Technique isn’t accessible—but the ghostly mix of manipulated vocal samples pulled from obscure places (E.G. “RA” is structured around a lengthy sample of “The Head Nod,” a 1995 song from Mad Skillz), juxtaposed against murky, and at times, disconcerting beats, like the slow motion crawl of the late arriving “Is My Clique,” or the blown out dissonance of the album’s final track, “Pre Meditation.”

Constructed of 15 tracks, the recently released Strictly 4 Playaz, Volume 6, is, as of this writing, not yet out of print—there are six copies of the cassette left via the Sound Transitions Bandcamp page, ready to be dispatched on the 18th.  Like its predecessor, a number of the tracks on Strictly are punctuated by the unsettling cackling sample—and here, as demonstrated on “Pullin Somethin” and “Glock on My Lap,” Jones includes a caricature of a voice manipulated with some kind of ‘radio’ or ‘deep bass’ effect—similar to the tags you hear when you download something off of Datpiff; though, in execution, I am not entirely sure why he chose to include that layer—it takes you out of the dusty, moderately spooky environment he’s working to create. 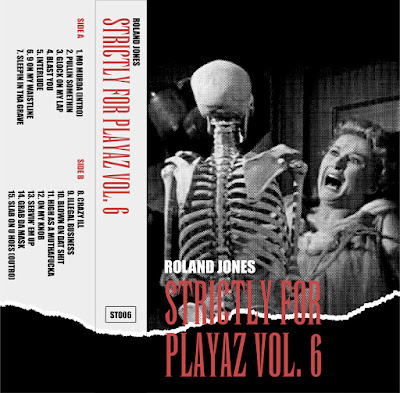 Based on the bizarre and haunting cover art for Strictly alone, you should get the idea that this is a slightly different kind of collection of material—the pieces are all much, much sorter, and the focus, more or less, is on concocting that unnerving, dark atmosphere: the tracks have titles like “Mo Murda” (a Bone Thugs reference for those paying attention), “9 on My Waistline,” “Sleepin in Tha Grave,” “On My Knob,” and “Slab on You Hoes.”

Throughout, Jones walks that line between creating groove-oriented, more instrumental compositions that are far less menacing or unsettling—then switches gears completely and steers things into a dissonant and disquieting place; the give and take he creates, both on Strictly, as well as on Raw Technique, make for fascinating listens.

The work of Roland Jones, it should be obvious by now as we are quickly approaching the 1,000 word mark, is not for everybody—it’s a niche kind of sound for a very specific listening audience: fans of rap music, and fans of wildly experimental sounds. In the Venn diagram of those two groups, I’m not sure how much of an intersection there is. Jones, shrouded in mystery, is making absolutely fearless music that is capable of striking fear—or at least making you slightly uncomfortable as begin immersing yourself in it; both releases have a completely mesmerizing effect that will stay with you long after you’ve finished listening.