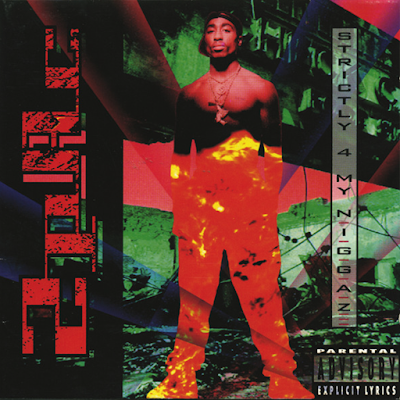 I was ten years old the first time I heard the name Tupac Shakur.

It was the winter between 1993 and 1994, and I would have been in fifth grade. I was home sick for what seemed like weeks (though it was probably a few days) with my first of many bouts with bronchitis. Bedridden, I would drift through my sick days by reading comic books, feigning interest in the schoolwork I was missing out on, sleeping when I could, and watching hours and hours of daytime television.

It was during these days where I first discovered cooking programs like “Great Chefs, Great Cities”; it was during this time that I came across the wonder that was “Supermarket Sweep”; and it was during these December or January days that I found myself becoming very familiar with the same block of music videos airing in a regular rotation on MTV.

It was during this span of time that I first heard “Mr. Jones” by the Counting Crows, or “Mmmm Mmmm Mmmm Mmmm” by the Crash Test Dummies, or “Loser” by Beck, or “God” by Tori Amos, or “No Excuses” by Alice in Chains.” All of these videos saw a tremendous amount of airplay.

As did “Keep Ya Head Up” by Tupac Shakur.

The third single from Tupac’s sophomore album, Strictly 4 My N.I.G.G.A.Z,1 it’s one of his finest moments as not just a rapper—no, here, on a song like this, he transcends that, and becomes an artist. It’s arguably one of his most poignant and important songs, standing along side the like-minded “Dear Mama,” showing that when he wanted to be, Tupac could be incredibly thoughtful and well spoken—I mean, he was always thoughtful and well spoken; but here, it’s on a difficult and surprising subject.

Rap music, or hip-hop, or whatever you choose to call it, is built on a foundation of contradictions. And nobody exemplified those contradictions more than Shakur himself, during his astoundingly short lifetime. It may surprise you that, yes, he died young—but he didn’t even make it into the ’27 club.’ He was 26 at the time he died in a Las Vegas hospital in the fall of 1996. Up until that point, he spent almost the entirety of his twenties in the public eye—first, as a member of the group The Digital Underground (yes, the group responsible for “The Humpty Dance”), then branching out as a solo artist.

An album that was released 25 years ago.

I stop short of saying that time has not been kind of Strictly, but what has two and a half decades been kind to? The album is a product of its era—lyrically, it will be timeless, which is both good and bad; musically, it sounds like 1993. Hip hop was well out of its infancy by this point, and this album was released during a pivotal time for the genre as far as the directions it would splinter off into over the course of the next four or five years. The production sounds terribly dated; the overall flat mixing neglects any dynamics the record could have had.

Throughout its moderately self-indulgent running time of over an hour, Shakur wastes no time laying out the contradictions and juxtapositions of the album, as well as of himself as an artist. Strictly comes two years before his partnership with Suge Knight and Death Row Records, so it finds him not so much a participant of what he describes—no, not yet. While Shakur often thought of himself as a poet, here, he more often than not, plays the role of observing and reporting.

The album opens with the energetic, banging “Holler If Ya Hear Me,” and struggles to maintain that momentum as it sandwiches the Kriss Kross sampling (!) “Point The Finga” in between two ‘interlude’ tracks. The first of these two, “Pac’s Theme,” could, if anything, have been the album’s first track, since it serves as a bit of an introductory statement—creating a cacophony of dialogue samples including interviews with Shakur himself, and former Vice President Dan Quayle, who Shakur later attacks on “Peep Game.”

Beginning with the fifth track, “Last Wordz,” which some how brings both Ice Cube and Ice-T together, Strictly, for better or for worse, manages to maintain the same level of energy. You can hear where it would have benefitted from some additional production value and mixing—the vocals on “Peep Game” are way too loud, while in a sharp contrast, the vocals on the very next track, “Strugglin’” are flat and buried within the layers of the beat, with no room for any kind of dynamics between the two.

In comparison to the rest of the record, it’s interesting to remove the two big singles off of it—“I Get Around” and “Keep Ya Head Up”—to look at just how different they are. They don’t stick out like sore thumbs, but it’s clear that they were meant for much bigger things than being songs found within the latter half of this record. Both musically and structurally, they scream ‘hit.’ One is fun and infectious—“I Get Around” reunites Shakur with his former group The Digital Underground; it slinks along playfully, and lyrically, Shakur steps out of the violence and politics that surround Strictly, and fills the role of a hip-hop lothario—“just be happy with this quickie” he utters as a throw away line near the end of the first verse.

The other single—well, here are those contradictions I was mentioning earlier.

Fascinatingly enough, “Keep Ya Head Up,” is, like, the most positive song that Tupac Shakur ever recorded. It contains no profanity, and the entire thing, word for word, is damn near an anthem for black women—“I give a holla to my sisters on welfare,” he proclaims early in the song. “Tupac cares if don’t nobody else care.”

It’s such as stark juxtaposition—it almost seems like it’s coming from a different artist with a completely different mentality. One song is pro-woman—it’s about the struggles and pain and humiliation that women face (still to this day.) “Since we all came from a woman…I wonder why we take from our women; Why do we rape our women?” he asks.  How can this be coming from the same man who is so cavalier about loving them and leaving them and using disparaging language toward women?

How can this be coming from the man who was later incarcerated on charges of sexual assault?

This is the crux of almost all rap music—this strange dichotomy that, despite how frustrating it is, you just have to wind up living with it.

Strictly heads toward its conclusion with yet another single, “Papa’z Song.” It’s not terrible, but he hasn’t quite reached the “Dear Mama” level of emotional resonance yet. It’s still too accusatory and angry sounding, though the message is clear.

Following the release of Strictly 4 My N.I.G.G.A.Z would mark the beginning of a tumultuous time for Shakur. He was cast opposite Janet Jackson in Poetic Justice, but by the end of 1993, he was accused then later convicted of sexual assault. Roughly a year later, at the end of 1994, he was attacked in a violent shooting outside of a New York recording studio—the event that can be looked at as Shakur’s entry into the growing East Coast/West Coast rivalry.3

Shakur served nine months of his prison sentence; the case was being appealed, but even for a moderately successful rapper, he was drowning in legal fees and couldn’t pay the bail—which is where Suge Knight enters the picture. Near the end of 1995, Suge fronted the $1.4 million to pay Shakur’s bail, in exchange for three albums recorded for Death Row Records.

Prior to his affiliation with Death Row Records, Shakur released Me Against The World in 1995—the only artist to have a number one record while serving a prison sentence. Released roughly two years after Strictly, it found Shakur working with a much more developed sonic palate, as well as walking the balance between being introspective and confessional versus confrontational.
25 years later, Strictly 4 My N.I.G.G.A.Z is not as highly revered as Me Against The World or the bloated double LP All Eyez On Me, though it is not one to overlook either. Memorable for its singles, it’s also a snapshot of an artist that never stopped moving through time—right until the very end. It’s harrowing to think that, after this album was released, Shakur only had another three years left. His lyrics obviously reflected his hyper-awareness of his own mortality, and he managed to pack a lifetime’s worth into those final years.

Strictly 4 My N.I.G.G.A.Z is far from inessential—a portrait of an artist on the cusp of growth; on the cusp of becoming something much bigger than himself.

1- In this context, ‘N.I.G.G.A.Z’ stands for ‘Never Ign’ant Getting Goals Accomplished.’ However, I recall that many of the letters were still censored out with ‘*’s’ in the video credits on MTV.

2- There was a time when Snoop Dogg was still Snoop Doggy Dogg. This was that time.

3. Suge Knight’s infamous and quotable speech at The Source awards in 1994 can also be looked at as one of the earliest, and most public displays in the growing tensions between Death Row Records and, like, pretty much every artist from the East Coast.